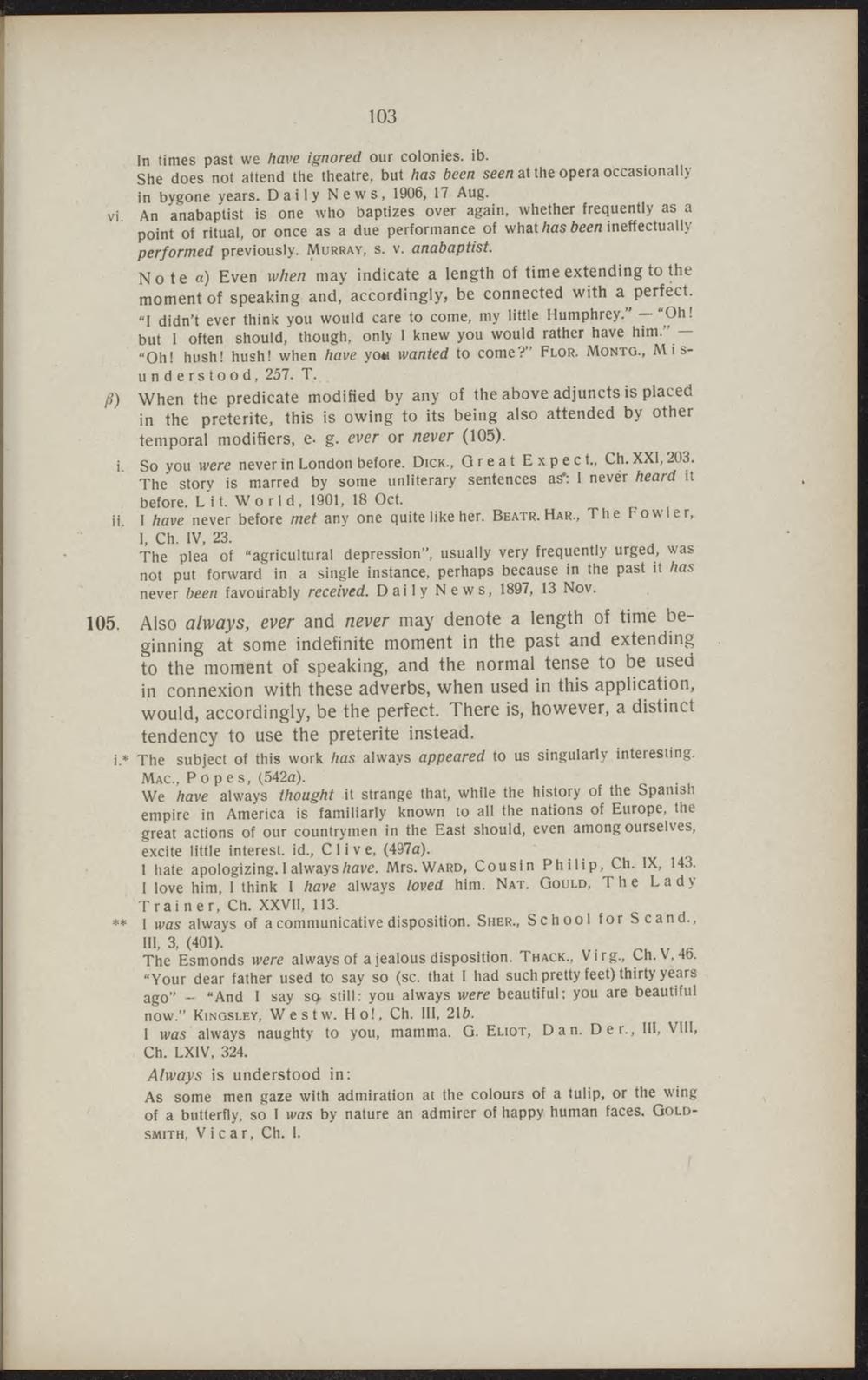 In times past we have ignored our colonies. ib.

She does not attend the theatre, but has been seen at the opera occasionally in bygone years. Daily News, 1906, 17 Aug. vi An anabaptist is one who baptizes over again, whether frequently as a point of ritual, or once as a due performance of what has been ineffectually performed previously. Murray, s. v. anabaptist.

No te a) Even when may indicate a length of timeextending to the moment of speaking and, accordingly, be connected with a perfect. «I didn't ever think you would care to come, my little Humphrey." — "Oh I but I often should, though, only I knew you would rather have him." — "Oh! hush! hush! when have you wanted to come?" Flor. Monto, M i sunderstood, 257. T. 0) When the predicate modified by any of the above adjuncts is placed in the preterite, this is owing to its being also attended by other temporal modifiers, e. g. ever or never (105).

The plea of "agricultural depression", usually very frequently urged, was not put forward in a single instance, perhaps because in the past it has never been favoürably received. Daily News, 1897, 13 Nov.

105. Also always, ever and never may denote a length of time beginning at some indefinite moment in the past and extending to the moment of speaking, and the normal tense to be used in connexion with these adverbs, when used in this application, would, accordingly, be the perfect. There is, however, a distinct tendency to use the preterite instead. i* The subject of this work has always appeared to us singularly interesting. Mac, Popes, (542a).

We have always thought it strange that, while the history of the Spamsn empire in America is familiarly known to all the nations of Europe, the great actions of our countrymen in the East should, even among ourseives, excite little interest, id, Clive, (497a).

The Esmonds were always of a jealous disposition. Thack, Virg, Ch.V,46. "Your dear father used to say so (sc. that I had such pretty feet) thirty yéars ago" - "And I say so, still: you always were beautiful: you are beautiful now." Kinosley, Westw. Ho!, Ch. Dl, 2\b.

Always is understood in:

As some men gaze with admiration at the colours of a tulip, or the wing of a butterfly, so I was by nature an admirer of happy human faces. Ooldsmith, V i c a r, Ch. I.