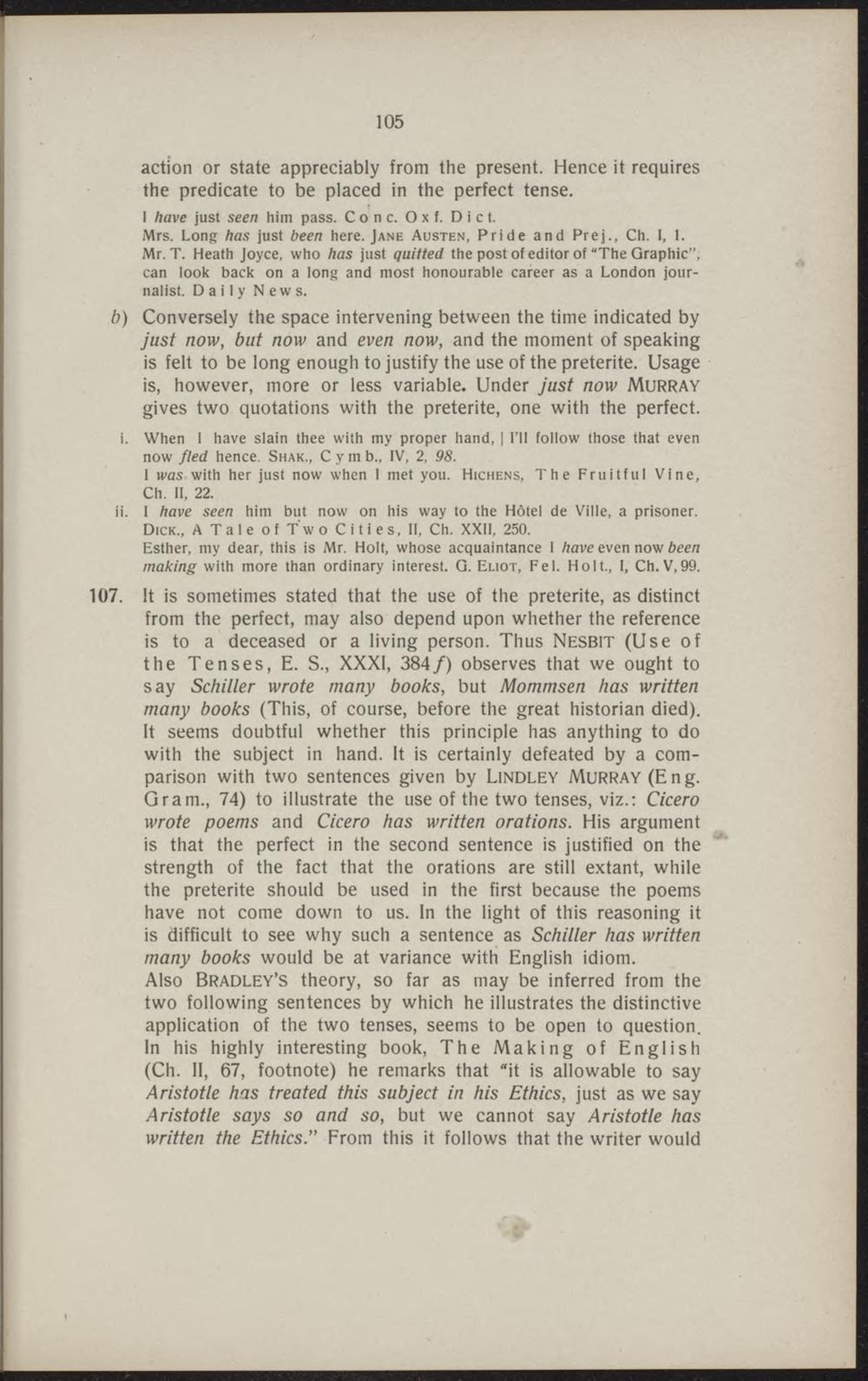 action or state appreciably from the present. Hence it requires the predicate to be placed in the perfect tense. I have just seen him pass. C o n c. O x f. D i c t.

Mts. Long has just been here. Jane Austen, Pride and Prej, Ch. I, 1. Mr. T. Heath Joyce, who Aas just quitted the post of editor of "The Graphic ", can look back on a long and most honourable career as a London journalist. Daily News.

b) Conversely the space intervening between the time indicated by just now, but now and even now, and the moment of speaking is feit to be long enough to justify the use of the preterite. Usage is, however, more or less variable. Under just now Murray gives two quotations with the preterite, one with the perfect.

Esther, my dear, this is Mr. Holt, whose acquaintance I Aave even now been making with more than ordinary interest. G. Eliot, Fel. Holt, i, Ch. V,99.

107. It is sometimes stated that the use of the preterite, as distinct from the perfect, may also depend upon whether the reference is to a deceased or a living person. Thus Nesbit (Use of the Tenses, E. S, XXXI, 384/) observes that we ought to say Schiller wrote many books, but Mommsen has written many books (This, of course, before the great historian died). It seems doubtful whether this principle has anything to do with the subject in hand. It is certainly defeated by a comparison with two sentences given by Lindley Murray (E n g. Gram, 74) to illustrate the use of the two tenses, viz.: Cicero wrote poems and Cicero has written orations. His argument is that the perfect in the second sentence is justified on the strength of the fact that the orations are still extant, while the preterite should be used in the first because the poems have not come down to us. In the light of this reasoning it is difficult to see why such a sentence as Schiller has written many books would be at variance with English idiom. Also Bradley's theory, so far as may be inferred from the two following sentences by which he illustrates the distinctive application of the two tenses, seems to be open to question. In his highly interesting book, The Making of English (Ch. II, 67, footnote) he remarks that "it is allowable to say Aristotle has treated this subject in his Ethics, just as we say Aristotle says so and so, but we cannot say Aristotle has written the Ethics." From this it follows that the writer would