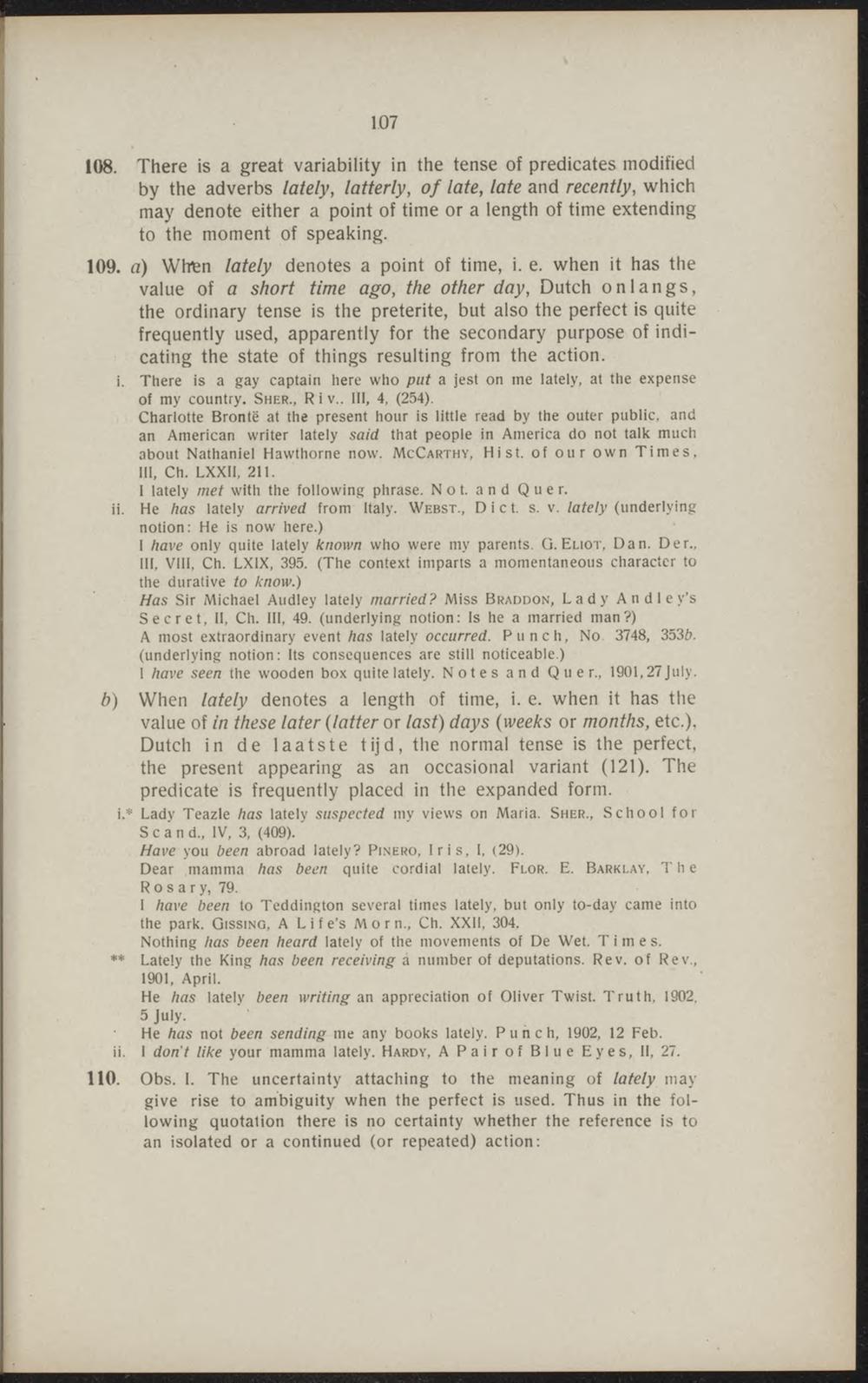 108. There is a great variability in the tense of predicates modified by the adverbs lately, latterly, of late, late and recently, which may denote either a point of time or a length of time extending to the moment of speaking.

value of a short time ago, the other day, Dutch onlangs, the ordinary tense is the preterite, but also the perfect is quite frequently used, apparently for the secondary purpose of indicating the state of things resulting from the action.

Charlotte Brontë at the present hour is little read by the outer public, and an American writer lately said that people in America do not talk much about Nathaniel Hawthorne now. McCarthy, Hist. of our own Times, IJl, Ch. LXXII, 211.

1 lately met with the following phrase. Not. and Quer.

I have only quite lately known who were my parents. G.Eliot, Dan. Der., III, VIII, Ch. LXIX, 395. (The context imparts a momentaneous character to the durative to know.)

b) When lately denotes a length of time, i. e. when it has the value of in these later (latter or last) days (weeks or months, etc), Dutch in de laatste tijd, the normal tense is the perfect, the present appearing as an occasional variant (121). The predicate is frequently placed in the expanded form.

i. * Lady Teazle has lately suspected my views on Maria. Sher, School for

Dear mamma has been quite cordial lately. Flor. E. Barklay, The

I have been to Teddington several times lately, but only to-day came into the park. Gissing, A Life's Mom, Ch. XXII, 304. Nothing has been heard lately of the movements of De Wet. Times. ** Lately the King has been receiving a number of deputations. Rev. of Rev, 1901, April.

He has lately been writing an appreciation of Oliver Twist. Truth, 1902, 5 Juiy.

110. Obs. I. The uncertainty attaching to the meaning of lately may give rise to ambiguity when the perfect is used. Thus in the following quotation there is no certainty whether the reference is to an isolated or a continued (or repeated) action: