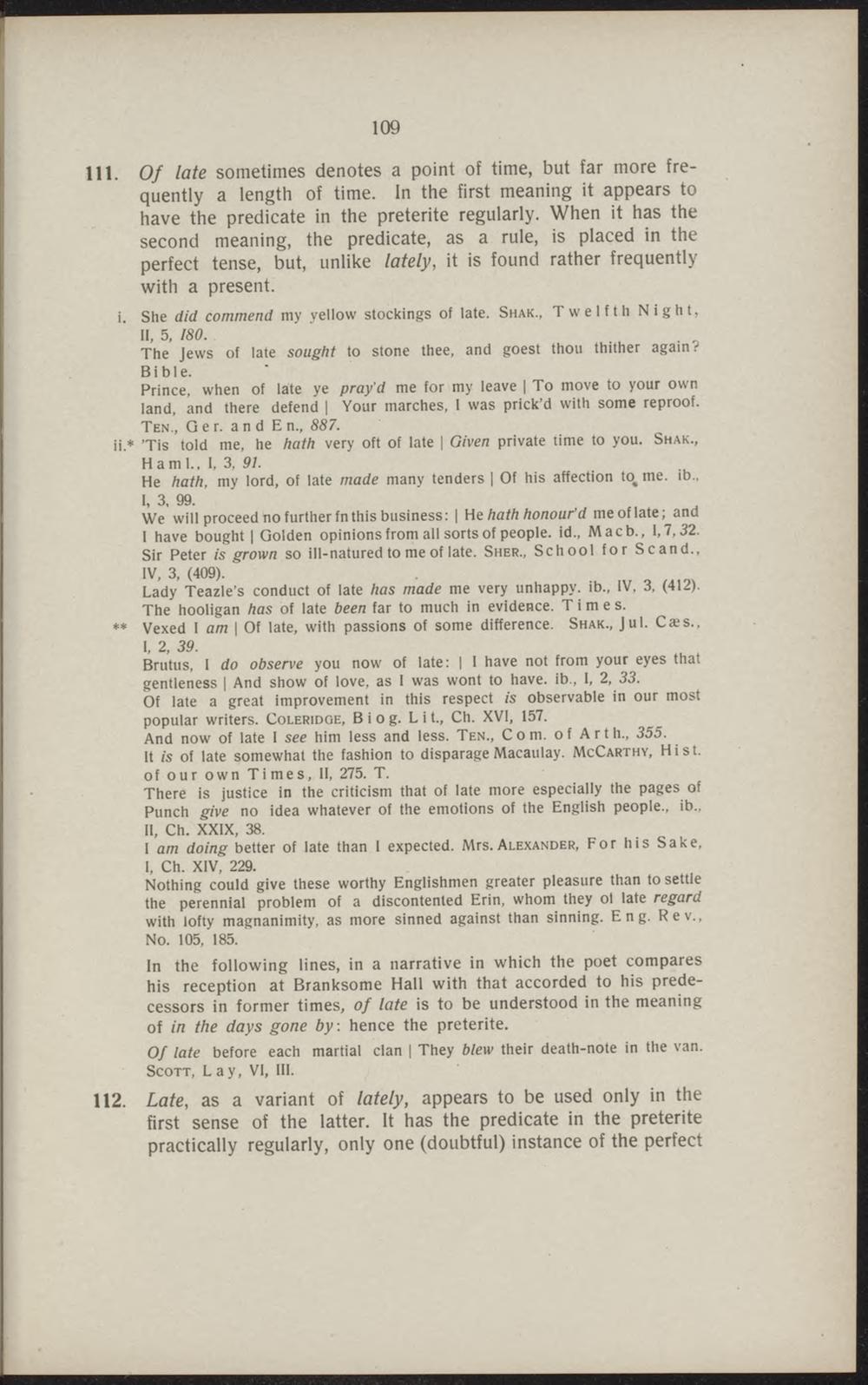 111. Of late sometimes denotes a point of time, but far more frequently a length of time. In the first meaning it appears to have the predicate in the preterite regularly. When it has the second meaning, the predicate, as a rule, is placed in the perfect tense, but, unlike lately, it is found rather frequently with a present.

i. She did commend my yellow stockings of late. Shak., Twelfth Night,

The Jews of late sought to stone thee, and goest thou thither again? Bible.

Prince, when of late ye pray'd me for my leave 1 To move to your own land, and there defend | Your marches, I was prick'd with some reproof. Ten, Oer. and En, 887.

He hath, my lord, of late made many tenders | Of his affection to# me. ib,

Lady Teazle's conduct of late has made me very unhappy. ib, IV, 3, (412). The hooligan has of late been far to much in evidence. Times. ** Vexed I am | Of late, with passions of some difference. Shak, Jul. Caes.,

Brutus, I do observe you now of late: | I have not from your eyes that

It is of late somewhal the fashion to disparageMacaulay. McCarthy, Hist.

There is justice in the criticism that of late more especially the pages of Punch give no idea whatever of the emotions of the English people, ib,

Nothing could give these worthy Englishmen greater pleasure than to setüe the perennial problem of a discontented Erin, whom they ot late regard with lofty magnanimity, as more sinned against than sinning. Eng. Rev, No. 105, 185.

In the following lines, in a narrative in which the poet compares his reception at Branksome Hall with that accorded to his predecessors in former times, of late is to be understood in the meaning of in the days gone by : hence the preterite.

Of late before each martial clan | They blew their death-note in the van. Scott, Lay, VI, III.

112. Late, as a variant of lately, appears to be used only in the first sense of the latter. It has the predicate in the preterite practically regularly, only one (doubtful) instance of the perfect