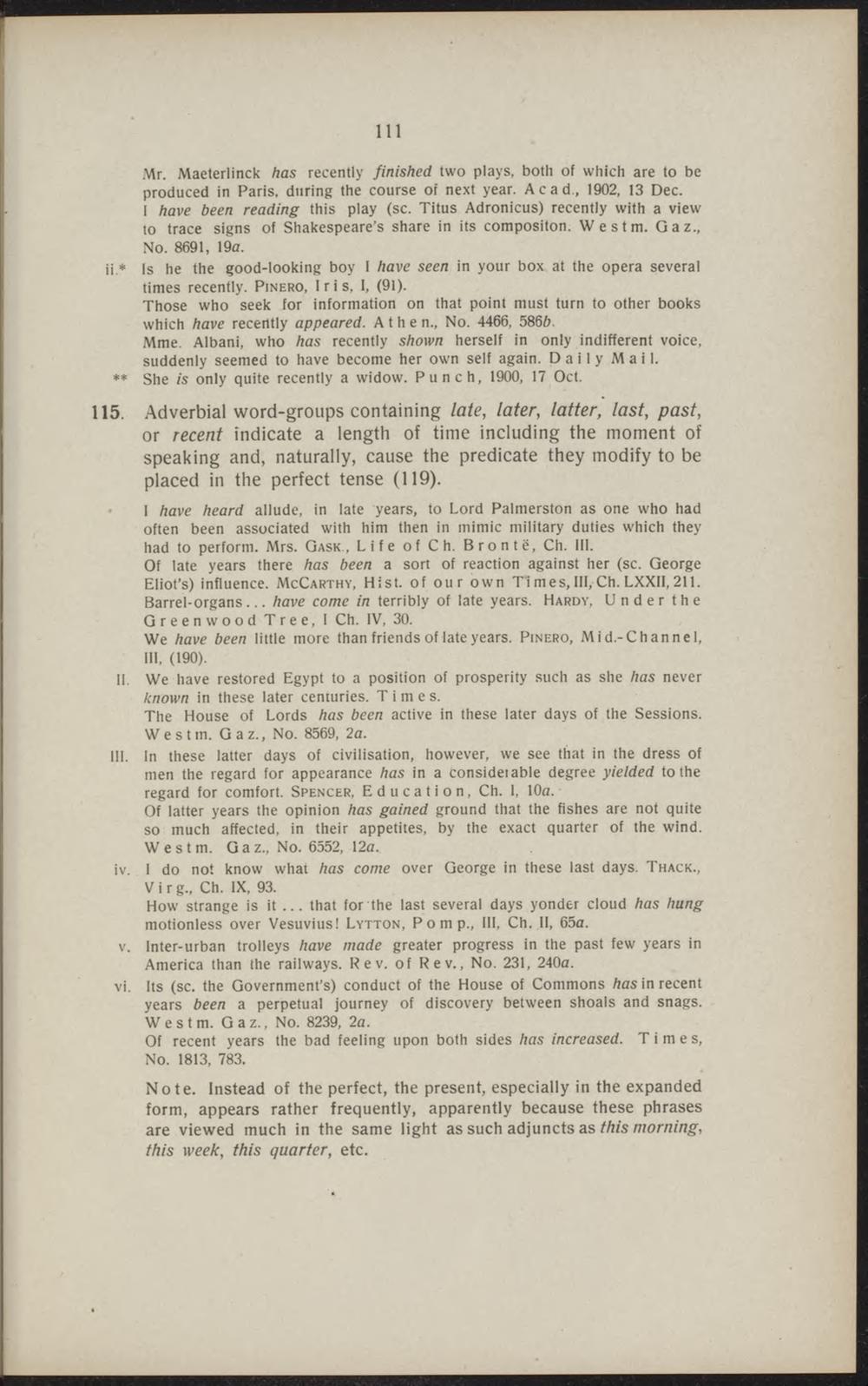 Mr. Maeterlinck Aas recently finished two plays, both of which are to be produced in Paris, during the course of next year. Acad, 1902, 13 Dec. I have been reading this play (sc. Titus Adronicus) recently with a view to tracé signs of Shakespeare's share in its compositon. Westm. Gaz, No. 8691, 19a.

ii* is he the good-looking boy I have seen in your box at the opera several times recently. Pinero, Iris, I, (91).

Those who seek for information on that point must turn to other books which have recerttly appeared. A t h e n, No. 4466, 586Ö. Mme. Albani, who has recently shown herself in only indifferent voice, suddenly seemed to have become her own self again. Daily Mail. ** She is only quite recently a widow. Punch, 1900, 17 Oct.

115. Adverbial word-groups containing late, later, latter, last, past, or recent ïndicate a length of time including the moment of speaking and, naturally, cause the predicate they modify to be placed in the perfect tense (119).

I Aave heard allude, in late years, to Lord Palmerston as one who had often been associated with him then in mimic military duties which they had to perform. Mrs. Gask, Life of Ch. Brontë, Ch. III. Of late years there Aas been a sort of reaction against her (sc. George Eliot's) influence. McCarthy, Hist. of our own Ti mes, III, Ch. LXXII, 211. Barrel-organs... Aave come in terribly of late years. Hardy, Under the Greenwood Tree, I Ch. IV, 30.

We have been little more than friends of late years. Pinero, Mid.-Channel, III, (190).

II. We have restored Egypt to a position of prosperity such as she Aas never known in these later ceniuries. Times.

III. In these latter days of civilisation, however, we see that in the dress of men the regard for appearance Aas in a Consideiable degree yielded tothe regard for comfort. Spencer, E d u c a t i o n, Ch. I, 10a.

Of latter years the opinion Aas gained ground that the fishes are not quite so much affected, in their appetites, by the exact quarter of the wind. Westm. Gaz, No. 6552, 12a.

How strange is it ... that for the last several days yonder cloud Aas hang motionless over Vesuvius! Lytton, Pomp, III, Ch. II, 65a.

v. Inter-urban trolleys Aave made greater progress in the past few years in America than the railways. Rev. of Rev., No. 231, 240a.

vi. Its (sc. the Government's) conduct of the House of Commons Aas in recent years been a perpetual journey of discovery between shoals and snags. Westm. Gaz., No. 8239, 2a.

Note. Instead of the perfect, the present, especially in the expanded form, appears rather frequently, apparently because these phrases are viewed much in the same light as such adjuncts as this morning, this week, this quarter, etc.