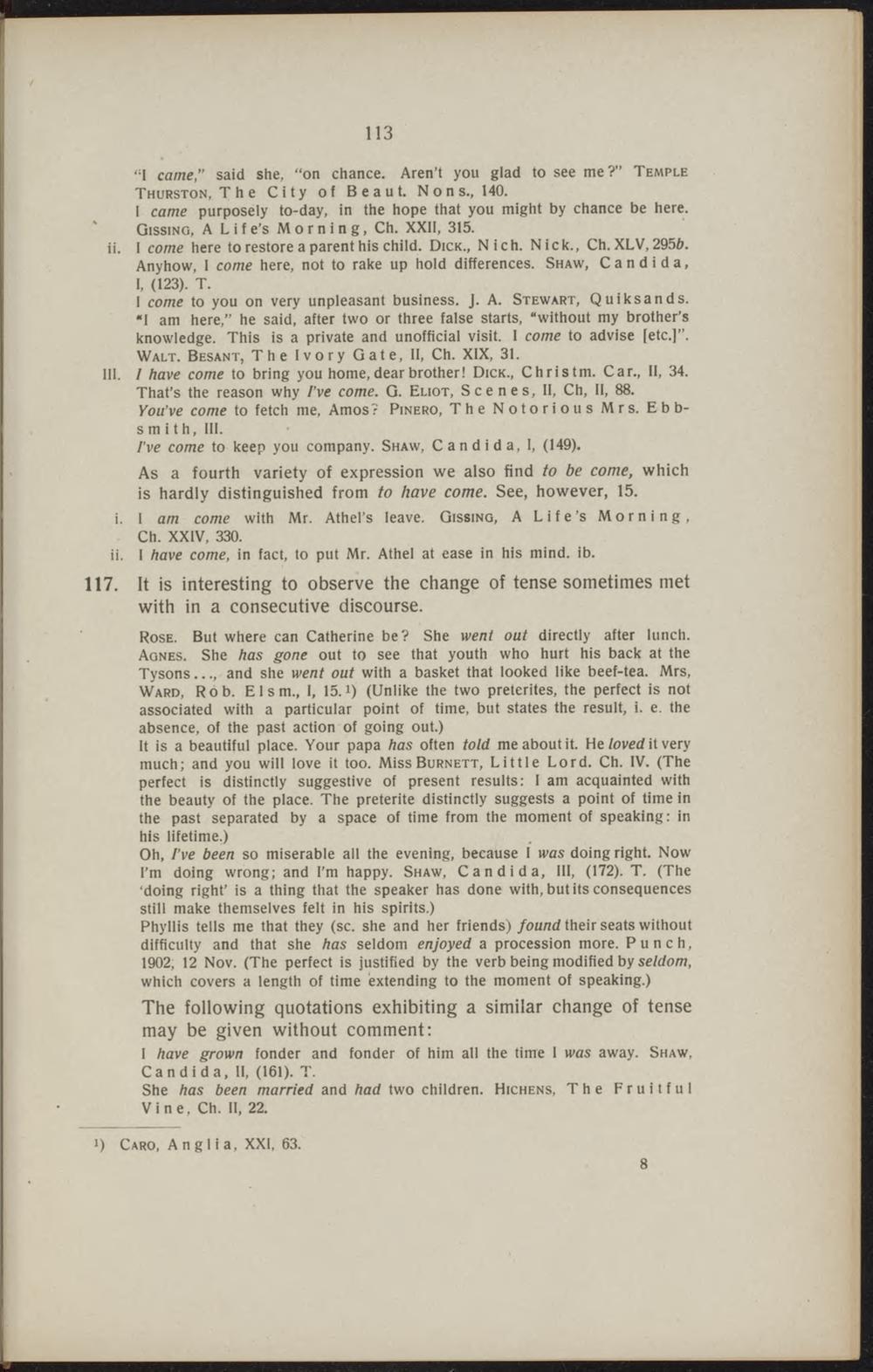 I come to you on very unpleasant business. J. A. Stewart, Quiksands. •I am here," he said, after two or three false starts, "without my brother's knowledge. This is a private and unofficial vislt. I come to advise [etc.]". Walt. Besant, The Ivory Gate, II, Ch. XIX, 31. III. / have come to bring you home, dear brother! Dick, Christm. Car, II, 34. That's the reason why 1've come. G. Eliot, Scènes, II, Ch, II, 88. You've come to fetch me, Amos? Pinero, The Notorious Mrs. Ebbsmith, III.

As a fourth variety of expression we also find to be come, which

is hardly distinguished from to have come. See, however, 15.

117. It is interesting to observe the change of tense sometimes met with in a consecutive discourse.

Rose. But where can Catherine be? She went out directly alter lunch. Aones. She has gone out to see that youth who hurt his back at the Tysons.., and she went out with a basket that looked like beef-tea. Mrs, Ward, Rob. E1 sm, I, 15.!) (Unlike the two preterites, the perfect is not associated with a particular point of time, but states the result, 1. e. the absence, of the past action of going out.)

It is a beautiful place. Your papa has often told me about it. He loved it very much; and you will love it too. MIssBurnett, Little Lord. Ch. IV. (The perfect is distinctly suggestive of present results: I am acquainted with the beauty of the place. The preterite distinctly suggests a point of time in the past separated by a space of time from the moment of speaking: in his lifetime.)

Oh, 1've been so miserable all the evening, because I was doing right. Now I'm doing wrong; and I'm happy. Shaw, Candida, III, (172). T. (The 'doing right' is a thing that the speaker has done with, but its consequences still make themselves lelt in his spirits.)

Phyllis tells me that they (sc. she and her friends) found their seats without difficulty and that she has seldom enjoyed a procession more. Punch, 1902, 12 Nov. (The perfect is justilied by the verb being modified by seldom, which covers a length of time extending to the moment of speaking.)

The following quotations exhibiting a similar change of tense may be given without comment:

She has been married and had two chlldren. Hichens, The Fruitful Vine, Ch. II, 22.