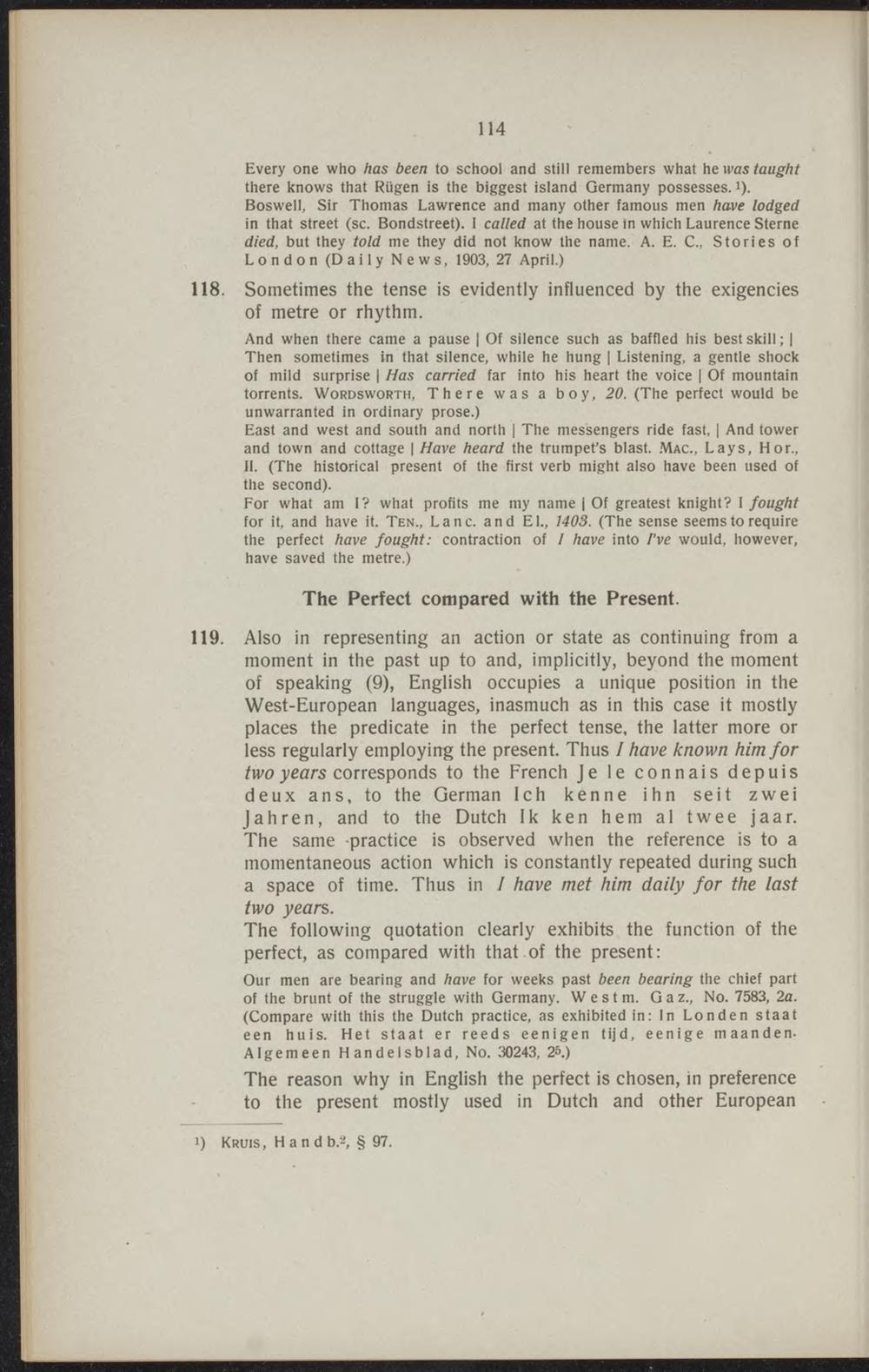 Every one who has been to school and still remembers what he was taught there knows that RUgen is the biggest island Germany possesses.!). Boswell, Sir Thomas Lawrence and many other famous men have lodged in that Street (sc. Bondstreet). I called at the house in which Laurence Sterne died, but they told me they did not know the name. A. E. C, S tori es of London (Daily News, 1903, 27 April.)

118. Sometimes the tense is evidently influenced by the exigencies of metre or rhythm.

And when there came a pause | Of silence such as baffled his best skill; | Then sometimes in that silence, white he hung | Listening, a gentle shock of mild surprise | Has carried far into his heart the voice | Of mountain torrents. Wordsworth, There was a boy, 20. (The perfect would be unwarranted in ordinary prose.)

East and west and south and north | The messengers ride fast, | And tower and town and cottage | Have heard the trurapefs blast. Mac, Lays, Hor, II. (The historical present of the first verb might also have been used of the second).

For what am I? what profits me my name i Of greatest knlght? I f ought for it, and have it. Ten, Lanc. and El, 1403. (The sense seems to require the perfect have f ought: contraction of / have into 1've would, however, have saved the metre.)

The Perfect compared with the Present.

119. Also in representing an action or state as continuing from a moment in the past up to and, implicitly, beyond the moment of speaking (9), English occupies a unique position in the West-European languages, inasmuch as in this case it mostly places the predicate in the perfect tense, the latter more or less regularly employirrg the present. Thus / have known him for two years corresponds to the French Je le connais depuis deux ans, to the German Ich kenne ihn seit zwei Jahren, and to the Dutch Ik ken hem al twee jaar. The same -practice is observed when the reference is to a momentaneous action which is constantly repeated during such a space of time. Thus in / have met him daily for the last two years.

The following quotation clearly exhibits the function of the perfect, as compared with that of the present:

Our men are bearing and have for weeks past been bearing the chief part of the brunt of the struggle with Germany. Westm. Gaz, No. 7583, 2a. (Compare with this the Dutch practice, as exhibited in: In Londen staat een huis. Het staat er reeds eenigen tijd, eenige maandenAlgemeen Handelsblad, No. 30243, 2»)

The reason why in English the perfect is chosen, in preference to the present mostly used in Dutch and other European