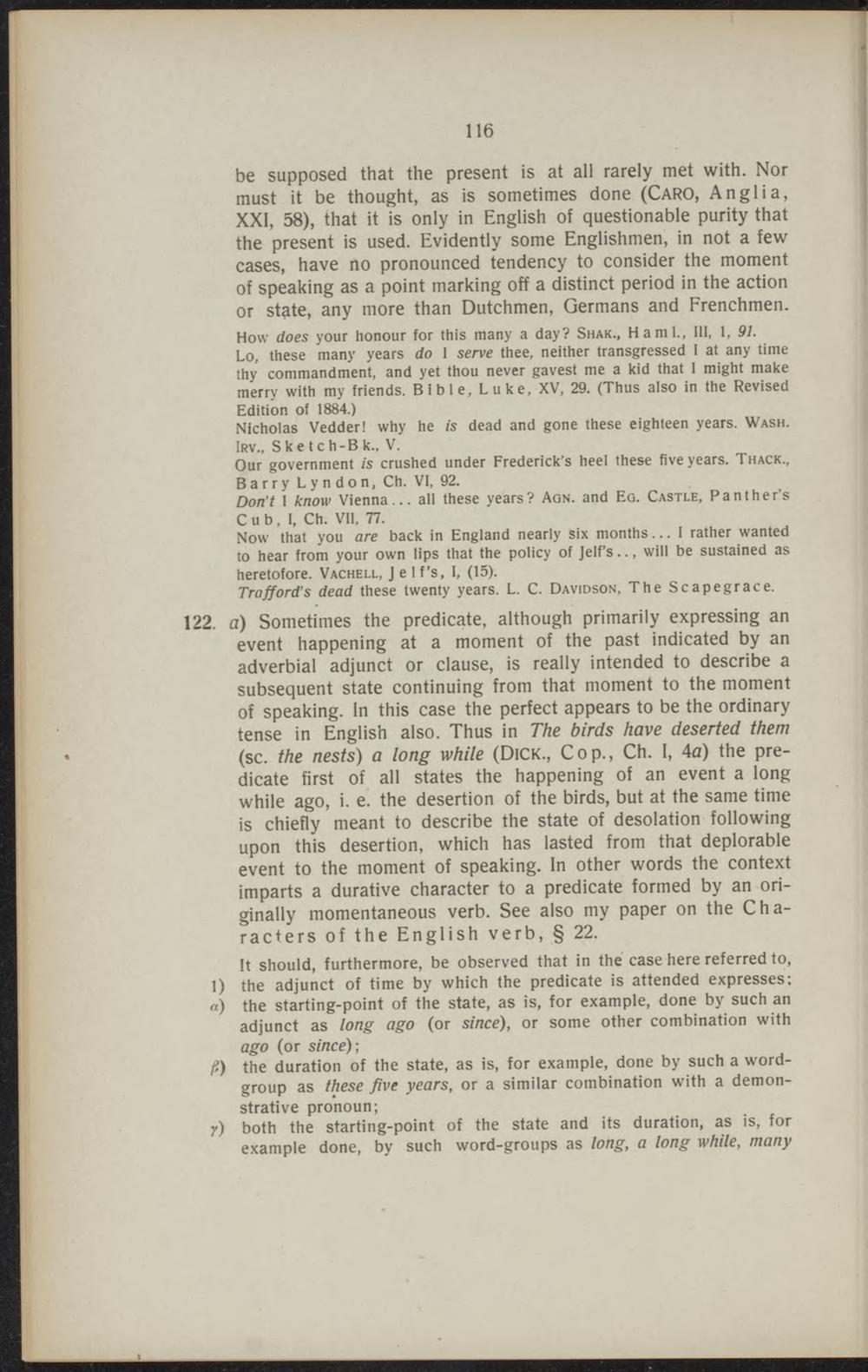 be supposed that the present is at all rarely met with. Nor must it be thought, as is sometimes done (Caro, Anglia, XXI, 58), that it is only in English of questionable purity that the present is used. Evidently some Englishmen, in not a few cases, have no pronounced tendency to consider the moment of speaking as a point marking off a distinct period in the action or state, any more than Dutchmen, Germans and Frenchmen. How does your honour for this many a day? Shak, Haml., UI 1, 91. Lo, these many years do I serve thee, neither transgressed I at any time thy' commandment, and yet thou never gavest me a kid that I might make merry with my friends. B i b i e, L u k e, XV, 29. (Thus also in the Revised Edition of 1884.)

Nicholas Vedder! why he is dead and gone these eighteen years. Wash. Irv., Sketch-Bk, V.

Now that you are back in England nearly Six months... I rather wanted to hear from your own lips that the policy of Jelfs.., will be sustained as heretofore. Vachell, J e 1 f's, I, (15).

Trafford's dead these twenty years. L. C. Davjdson, The Scapegrace. 122. d) Sometimes the predicate, although primarily expressing an event happening at a moment of the past indicated by an adverbial adjunct or clause, is really intended to describe a subsequent state continuing from that moment to the moment of speaking. In this case the perfect appears to be the ordinary tense in English also. Thus in The birds have deserted them (sc. the nests) a tong while (Dick, Cop., Ch. I, 4a) the predicate first of all states the happening of an event a long while ago, i. e. the desertion of the birds, but at the same time is chiefly meant to describe the state of desolation following upon this desertion, which has lasted from that deplorable event to the moment of speaking. In other words the context imparts a durative character to a predicate formed by an originally momentaneous verb. See also my paper on the Characters of the English verb, § 22.

It should, furthermore, be observed that in the case here referred to, 1) the adjunct of time by which the predicate is attended expresses; a) the starting-point of the state, as is, for example, done by such an

adjunct as long ago (or since), or some other combination with

S) the duration of the state, as is, for example, done by such a wordgroup as these five years, or a similar combination with a demonstrative pronoun;

r) both the starting-point of the state and its duration, as is, for example done, by such word-groups as long, a long while, many