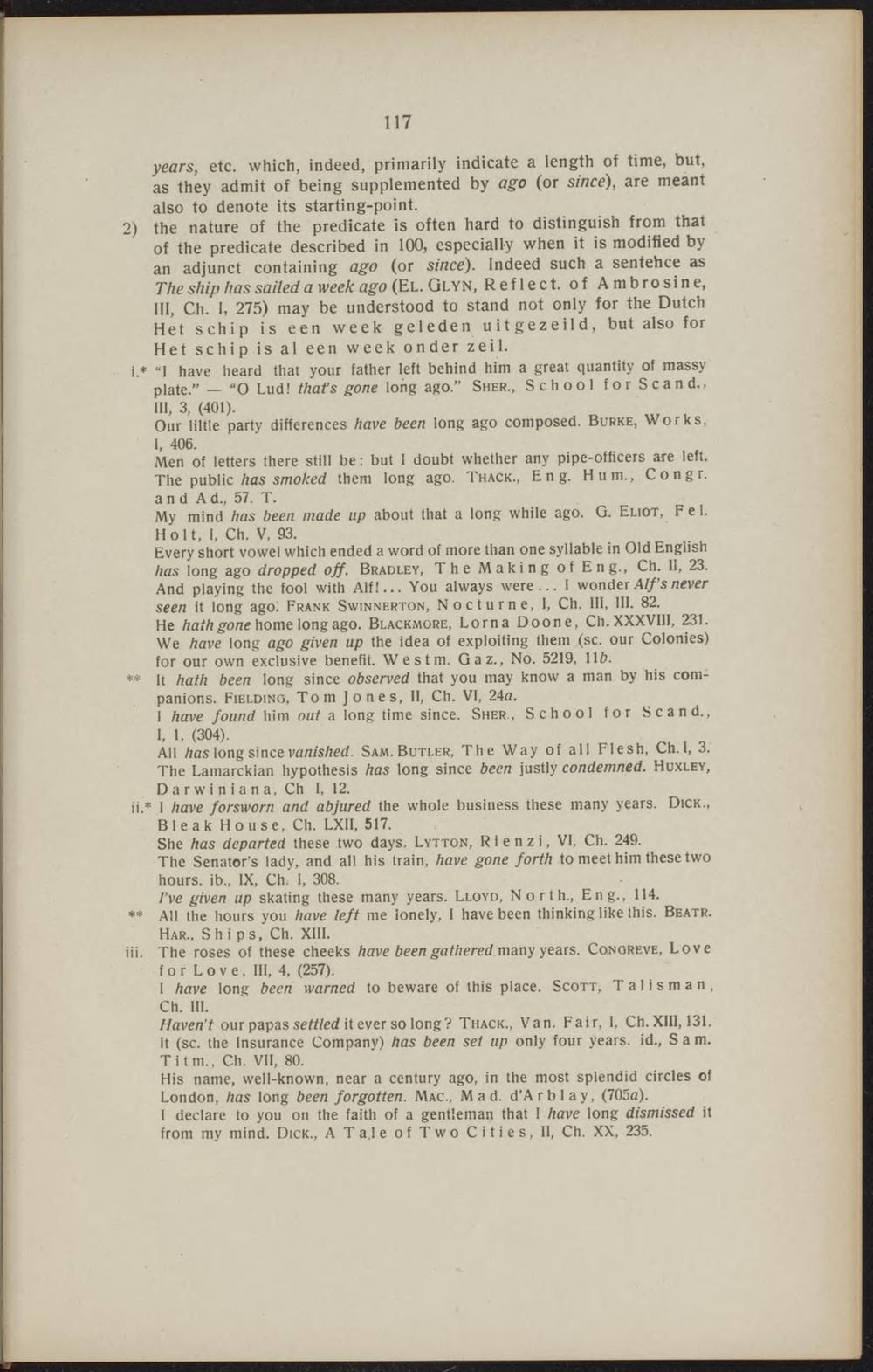 years, etc. which, indeed, primarily indicate a length of time, but, as they admit of being supplemented by ago (or since), are meant also to denote its starting-point.

the nature of the predicate is often hard to distinguish from that of the predicate described in 100, especially when it is modified by an adjunct containing ago (or since). Indeed such a sentehce as The ship hassaileda week ago (El. Glyn, Reflect. of Ambrosine, III, Ch. I, 275) may be understood to stand not only for the Dutch Het schip is een week geleden uitgezeild, but also for Het schip is al een week onder zeil. * "I have heard that your father left behind him a great quantity of massy

Our liltle party differences have been long ago composed. Burke, Works, I, 406.

Men of letters there still be: but I doubt whether any pipe-officers are left. The public has smoked them long ago. Thack, Eng. Hum., Con gr. and Ad, 57. T.

Every short vowel which ended a word of more than one syllable in Old English has long ago dropped off. Bradley, The Making of Eng, Ch. II, 23. And playing the fooi with Alf!... You always were... I wonderAlf'snever seen it long ago: Frank Swinnerton, Nocturne, I, Ch. III, III. 82. He hath gone home long ago. Blackmore, Lorna Doone, Ch. XXXVIII, 231. We have long ago given up the idea of exploiting them (sc. our Colonies) for our own exclusive benefit. Westm. Gaz., No. 5219, lift. It hath been long since observed that you may know a man by his companions. Fieldino, Tom Jones, II, Ch. VI, 24a.

All has long sincevanished. Sam. Butler, The Way of all Flesh, Ch.l, 3. The Lamarckian hypothesis has long since been justly condemned. Huxley, Darwinlana, Ch 1, 12. * I have forsworn and abjured the whole business these many years. Dick, BI eak House, Ch. LXII, 517.

The Senator's lady, and all his train, have gone forth to meet him these two

Vve given up skating these many years. Lloyd, Nortri, Eng, 114.

All the hours you have left me lonely, I have been thinking like this. Beatr.

I have long been wanted to beware of this place. Scott, Talisman, Ch. III.

His name, well-known, near a century ago, in the most splendid circles of London, has long been forgotten. Mac, Mad. d'Arblay, (705a). I declare to you on the faith of a gentleman that I have long dismissed it from my mind. Dick, A Tale of Two Cities, II, Ch. XX, 235.