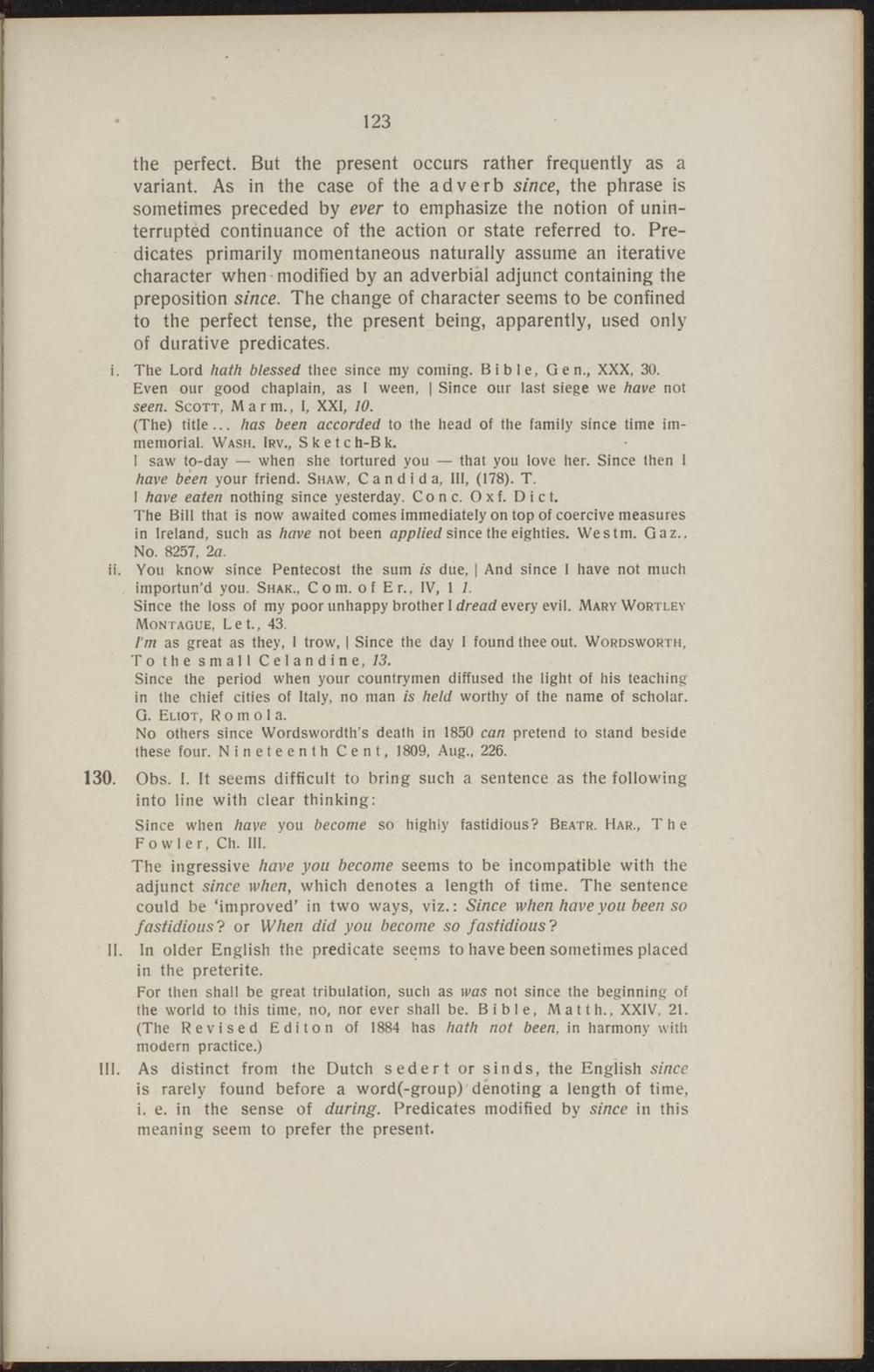 the perfect. But the present occurs rather frequently as a variant. As in the case of the adverb since, the phrase is sometimes preceded by ever to emphasize the notion of uninterrupted continuance of the action or state referred to. Predicates primarily momentaneous naturally assume an iterative character when modified by an adverbial adjunct containing the preposition since. The change of character seems to be confined to the perfect tense, the present being, apparently, used only of durative predicates.

(The) title... has been accorded to the head of the family since time immemoriai. Wash. Irv, S k e t c h-B k.

I saw to-day — when she tortured you — that you love her. Since then I

I have eaten nothing since yesterday. Conc. Oxf. Dict.

in Ireland, such as have not been applied since the eighties. Westm. Gaz.,

Since the loss of my poor unhappy brother I dread every evil. Mary Wortley Montague, Let, 43.

I'm as great as they, I trow, | Since the day I found thee out. Wordsworth, TothesmallCelandine, 13.

Since the period when your countrymen diffused the light of his teaching in the chief cities of Italy, no man is held worthy of the name of scholar. G. Eliot, R o m o 1 a.

130. Obs. I. It seems difficult to bring such a sentence as the following into line with dear thinking:

Since when have you become so highly fastidious? Beatr. Har, The Fowler, Ch. III.

The ingressive have you become seems to be incompatible with the adjunct since when, which denotes a length of time. The sentence could be 'improved' in two ways, viz.: Since when have you been so fastidious? or When did you become so fastidious? II. In older English the predicate seems to have been sometimes placed in the preterite.

For then shall be great tribulation, such as was not since the beginning of the world to this time, no, nor ever shall be. Bible, Matth, XXIV, 21. (The Revised Editon of 1884 has hath not been, in harmony with modern practice.)

III. As distinct from the Dutch sedert or sinds, the English since is rarely found before a word(-group) denoting a length of time, i. e. in the sense of during. Predicates modified by since in this meaning seem to prefer the present.