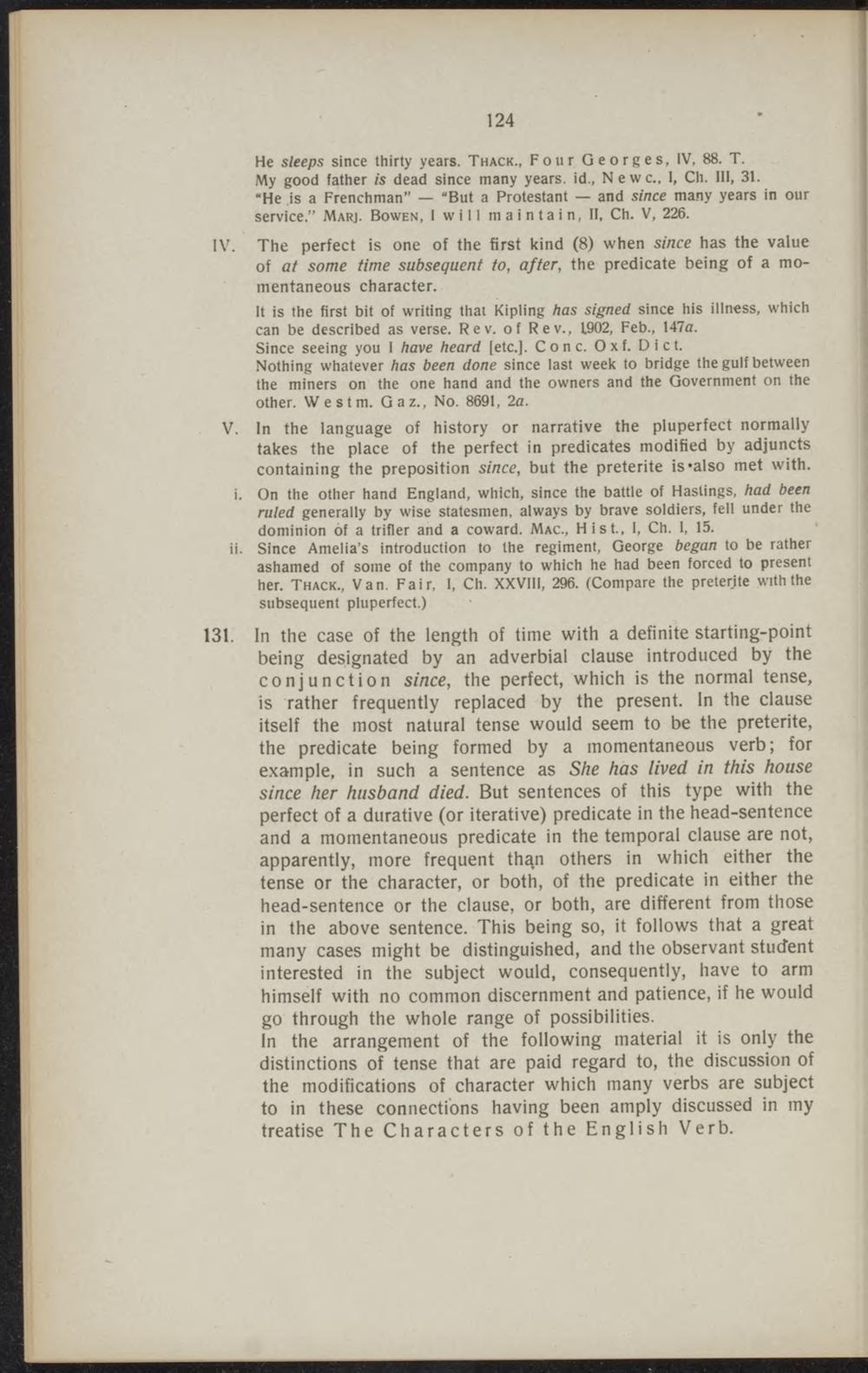 IV. The perfect is one of the first kind (8) when since has the value of at some time subsequent to, after, the predicate being of a momentaneous character.

It is the first bit of writing that Kipling has signed since his illness, which can be described as verse. Rev. of Rev, 1502, Feb, 147a. Since seeing you I have heard [etc.]. C o n c. O x f. D i c t. Nothing whatever has been done since last week to bridge the gulf between the miners on the one hand and the owners and the Government on the other. Westm. Gaz., No. 8691, 2a. V. In the language of history or narrative the pluperfect normally takes the place of the perfect in predicates modified by adjuncts containing the preposition since, but the preterite is-also met with.

i. On the other hand England, which, since the battle of Hastings, had been ruled generally by wise statesmen, always by brave soidiers, feil under the dominion óf a trifler and a coward. Mac, Hist, I, Ch. I, 15.

ii. Since Amelia's introduction to the regiment, George began to be rather ashamed of some of the company to which he had been forced to present her. Thack., Van. Fair, I, Ch. XXVIII, 296. (Compare the preterjte with the subsequent pluperfect.)

131. In the case of the length of time with a definite starting-point being designated by an adverbial clause introduced by the conjunction since, the perfect, which is the normal tense, is rather frequently replaced by the present. In the clause itself the most natural tense would seem to be the preterite, the predicate being formed by a momentaneous verb; for example, in such a sentence as She has lived in this house since her husband died. But sentences of this type with the perfect of a durative (or iterative) predicate in the head-sentence and a momentaneous predicate in the temporal clause are not, apparently, more frequent th^n others in which either the tense or the character, or both, of the predicate in either the head-sentence or the clause, or both, are different from those in the above sentence. This being so, it follows that a great many cases might be distinguished, and the observant student interested in the subject would, consequently, have to arm himself with no common discernment and patience, if he would go through the whole range of possibilities. In the arrangement of the following material it is only the distinctions of tense that are paid regard to, the discussion of the modifications of character which many verbs are subject to in these connecti'ons having been amply discussed in my treatise The Characters of the English Verb.