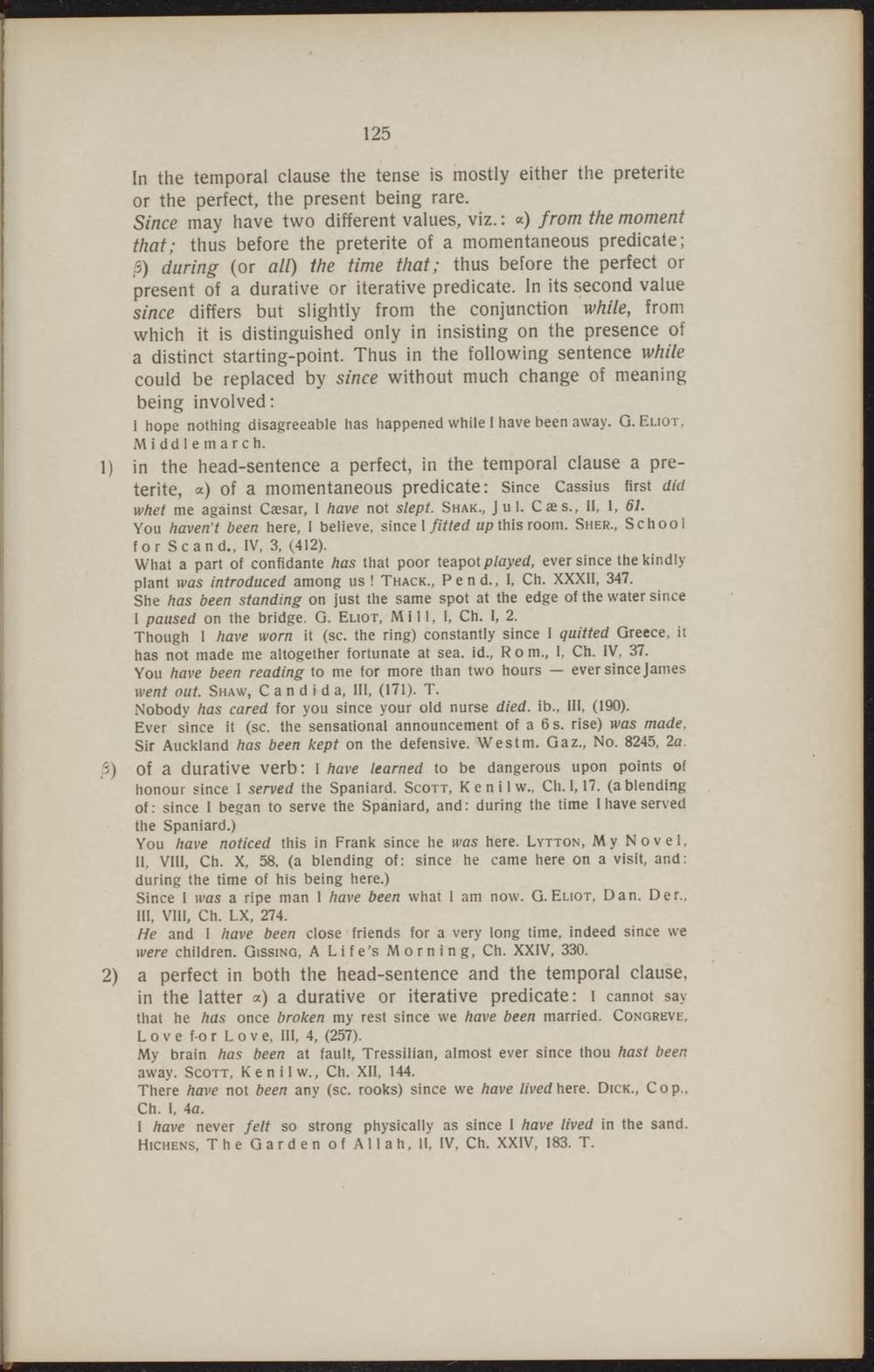 In the temporal clause the tense is mostly either the preterite or the perfect, the present being rare.

Since may have two different values, viz.: «) from the moment that; thus before the preterite of a momentaneous predicate; P) during (or alt) the time that; thus before the perfect or present of a durative or iterative predicate. In its second value since differs but slightly from the conjunction while, from which it is distinguished only in insisting on the presence of a distinct starting-point. Thus in the following sentence while could be replaced by since without much change of meaning being involved:

I bope nothing disagreeable has happened while I have been away. O. Eliot, Middlemarch.

in the head-sentence a perfect, in the temporal clause a preterite, *) of a momentaneous predicate: Since Cassius first did whet me against Caesar, I have not slept. Shak., Jul. Caes, II, 1, 61. You haven't been here, I believe, sincel fitted up this room. Sher., School for Sc and, IV, 3, (412).

What a part of confidante has that poor teapot played, ever since the kindly plant was introduced among us ! Thack, P e n d., I, Ch. XXXII, 347. She has been standing on just the same spot at the edge of the water since I paused on the bridge. G. Eliot, M i 11, I, Ch. I, 2. Though I have worn it (sc. the ring) constantly since I quitted Greece, it has not made me altOgether fortunate at sea. id, R o m, I, Ch. IV, 37. You have been reading to me lor more than two hours — ever since James went out. Shaw, Candida, Hl (171). T.

Nobody Aas cared for you since your old nurse died. ib, III, (190). Ever since it (sc. the sensational announcement of a 6s. rise) was made, Sir Auckland Aas been kept on the defensive. Westm. Gaz, No. 8245, 2a. of a durative verb: I Aave learned to be dangerous upon points of honour since I served the Spaniard. Scott, Keniiw, Ch. 1,17. (a Wending of: since I began to serve the Spaniard, and: during the time I have served the Spaniard.)

You Aave noticed this in Frank since he ivas here. Lytton, My No vel,

Since I was a ripe man I Aave been what I am now. G.Eliot, Dan. Der,

He and I Aave been close friends for a very long time, indeed since we were children. Gissing, A Li fe's Morning, Ch. XXIV, 330. a perfect in both the head-sentence and the temporal clause, in the latter «) a durative or iterative predicate: i cannot say that he Aas once broken my rest since we Aave been married. Conoreve, Love for Love, III, 4, (257).

My brain Aas been at fault, Tressillan, almost ever since thou Aasf been away. Scott, Keniiw., Ch. XII, 144.

I Aave never feit so strong physically as since I Aave lived in the sand. Hichens, The Gard en of Allah, II, IV, Ch. XXIV, 183. T.