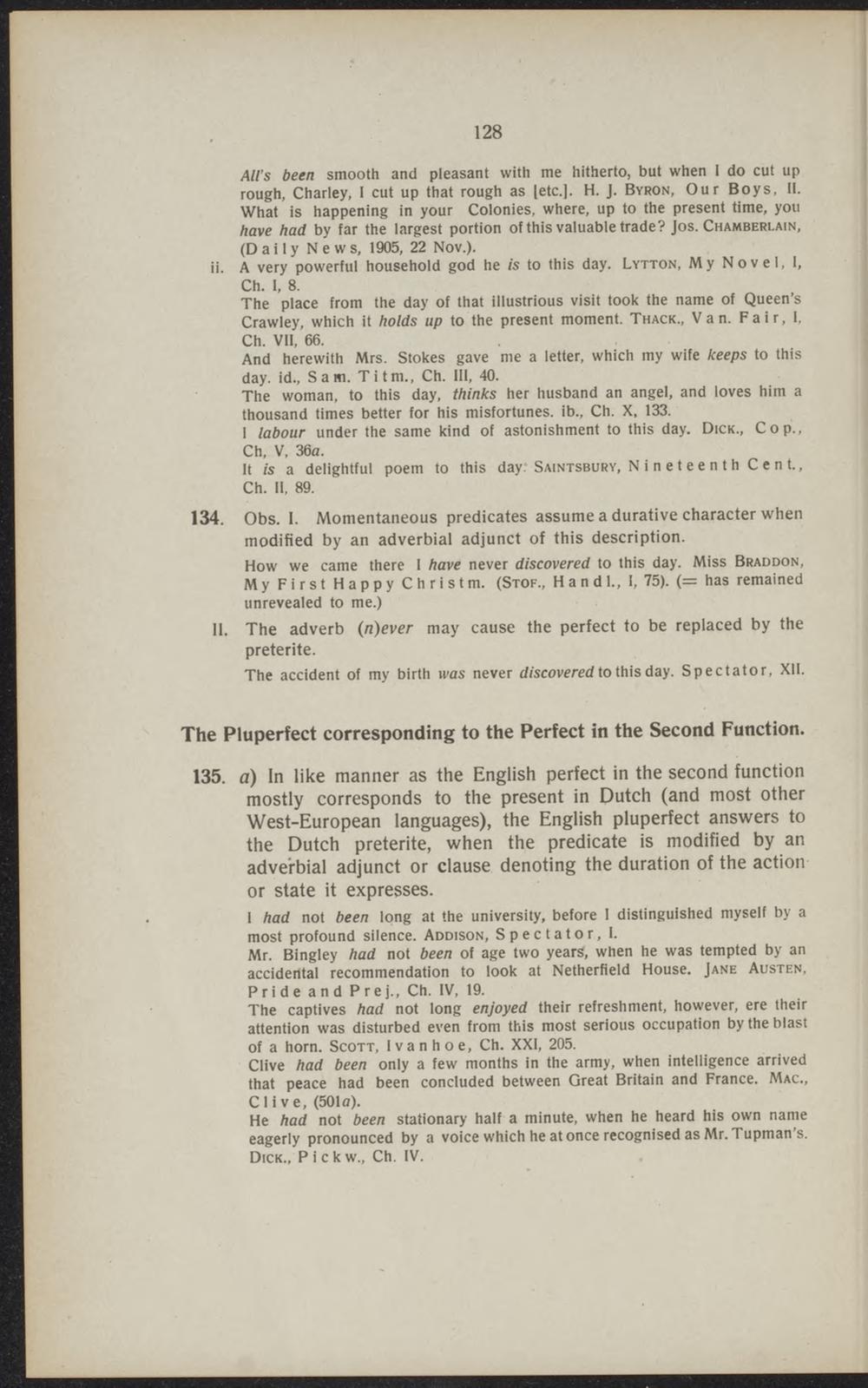 The place from the day of that illustrious visit took the name of Queen's Crawley, which it holds up to the present moment. Thack., Van. Fair, I, Ch. VII, 66.

The woman, to this day, thinks her husband an angel, and loves him a thousand times better for his misfortunes. ib, Ch. X, 133. I labour under the same kind of astonishment to this day. Dick, C o p., Ch, V, 36a.

It is a delightful poem to this day: Saintsbury, Nineteenth Cent., Ch. II, 89.

134. Obs. I. Momentaneous predicates assume a durative character when modified by an adverbial adjunct of this description. How we came there I have never discovered to this day. Miss Braddon, MyFirstHappyChristm. (Stof, H a n d 1, I, 75). (= has remained unrevealed to me.)

II. The adverb (n)ever may cause the perfect to be replaced by the preterite.

The accident of my birth was never discovered to this day. Spectator, XII.

The Pluperfect corresponding to the Perfect in the Second Function.

135. a) In like manner as the English perfect in the second function mostly corresponds to the present in Dutch (and most other West-European languages), the English pluperfect answers to the Dutch preterite, when the predicate is modified by an adverbial adjunct or clause denoting the duration of the action or state it expresses.

I had not been long at the university, before I distingulshed myself by a most profound silence. Addison, Spectator, I.

Mr. Bingley had not been of age two years*, when he was tempted by an accidental recommendation to look at Netherfield House. Jane Austen, Pride and Prej, Ch. IV, 19.

The captives had not long enjoyed their refreshment, however, ere their attention was disturbed even from this most serious occupation by the blast of a horn. Scott, I van hoe, Ch. XXI, 205.

Clive had been only a few months in the army, when intelligence arrived that peace had been concluded between Great Britain and France. Mac, Clive, (501a).

He had not been statlonary half a minute, when he heard his own name eagerly pronounced by a voice which he at once recognised as Mr. Tupman's. Dick, Pickw, Ch. IV.