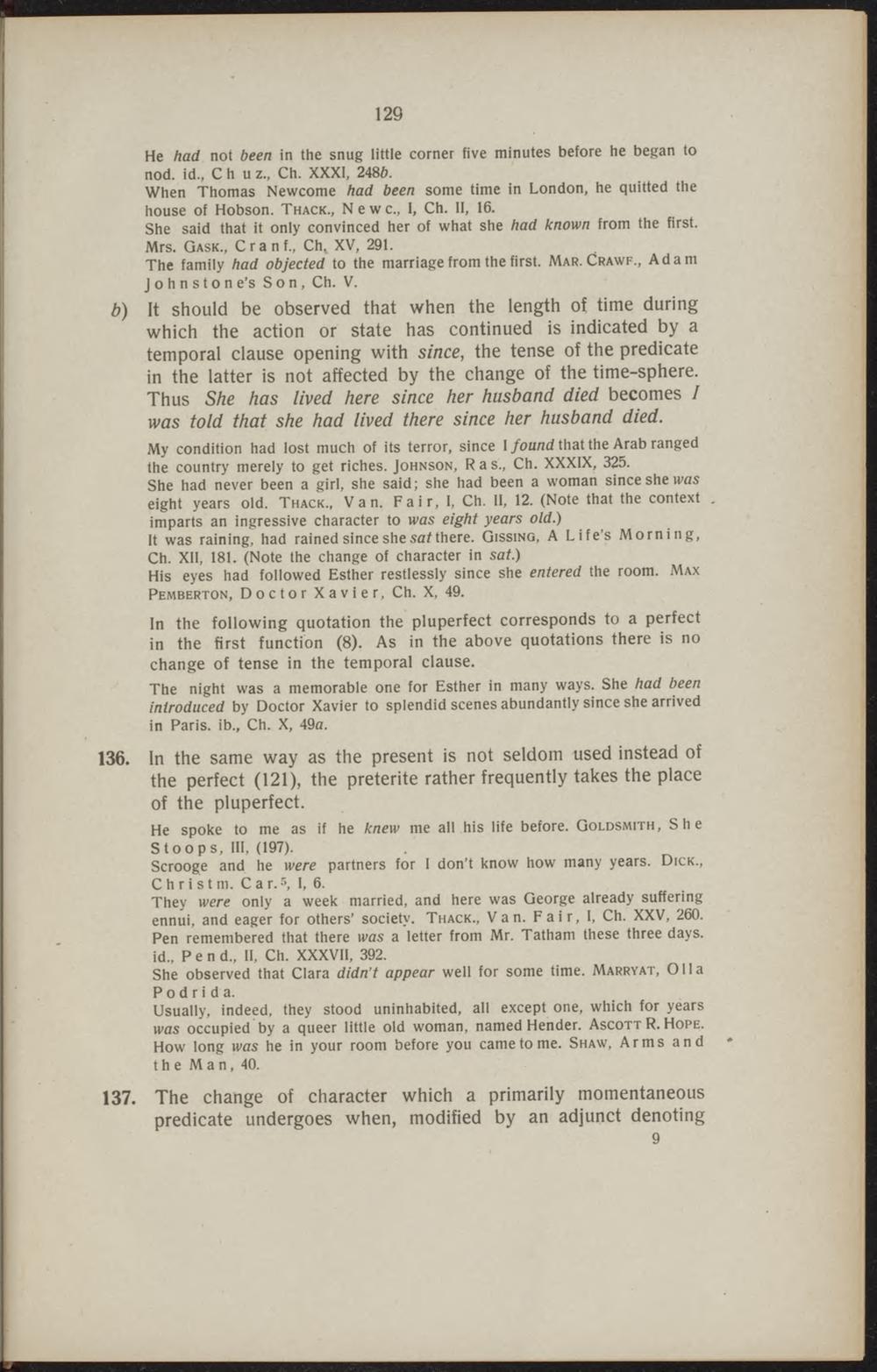 When Thomas Newcome had been some time in London, he quitted the house of Hobson. Thack, N e w c, I, Ch. II, 16.

She said that it only eonvinced her of what she had known from the first. Mrs. Gask, Cranf, Ch,. XV, 291.

The family had objected to the marriage from the first. Mar. Crawf, Adam Johnstone's Son, Ch. V. b) It should be observed that when the length of time during which the action or state has continued is indicated by a temporal clause opening with since, the tense of the predicate in the latter is not affected by the change of the time-sphere. Thus She has lived here since her husband died becomes / was told that she had lived there since her husband died. My condition had lost much of its terror, since l found that the Arabranged the country merely to get riches. Johnson, R a s, Ch. XXXLX, 325. She had never been a girl, she said; she had been a woman since she was eight years old. Thack, Va n. Fa i r, I, Ch. II, 12. (Note that the context imparts an ingressive character to was eight years old.) It was raining, had rained since she sat there. Gissing, A Life's Morning, Ch. XII, 181. (Note the change of character in sat.)

In the following quotation the pluperfect corresponds to a perfect in the first function (8). As in the above quotations there is no change of tense in the temporal clause.

The night was a memorable one for Esther in many ways. She had been introduced by Doctor Xavier to splendid scènes abundantly since she arrived in Paris, ib, Ch. X, 49a.

136. In the same way as the present is not seldom used instead of the perfect (121), the preterite rather frequently takes the place of the pluperfect.

Scrooge and. he were partners for I don't know how many years. Dick, Christm. Car.s, I, 6.

They were only a week married, and here was George already suffering ennui, and eager for others' society. Thack, Van. Fair, I, Ch. XXV, 260. Pen remembered that there was a letter from Mr. Tatham these three days. id, P e n d„ II, Ch. XXXVII, 392.

She observed that Clara didn't appear well for some time. Marryat, 011 a Pod r i d a.

Usually, indeed, they stood uninhabited, all except one, which for years was occupied by a queer little old woman, named Hender. Ascott R. Hope. How long was he in your room before you came to me. Shaw, Arms and the Man, 40.

137. The change of character which a primarily momentaneous predicate undergoes when, modified by an adjunct denoting