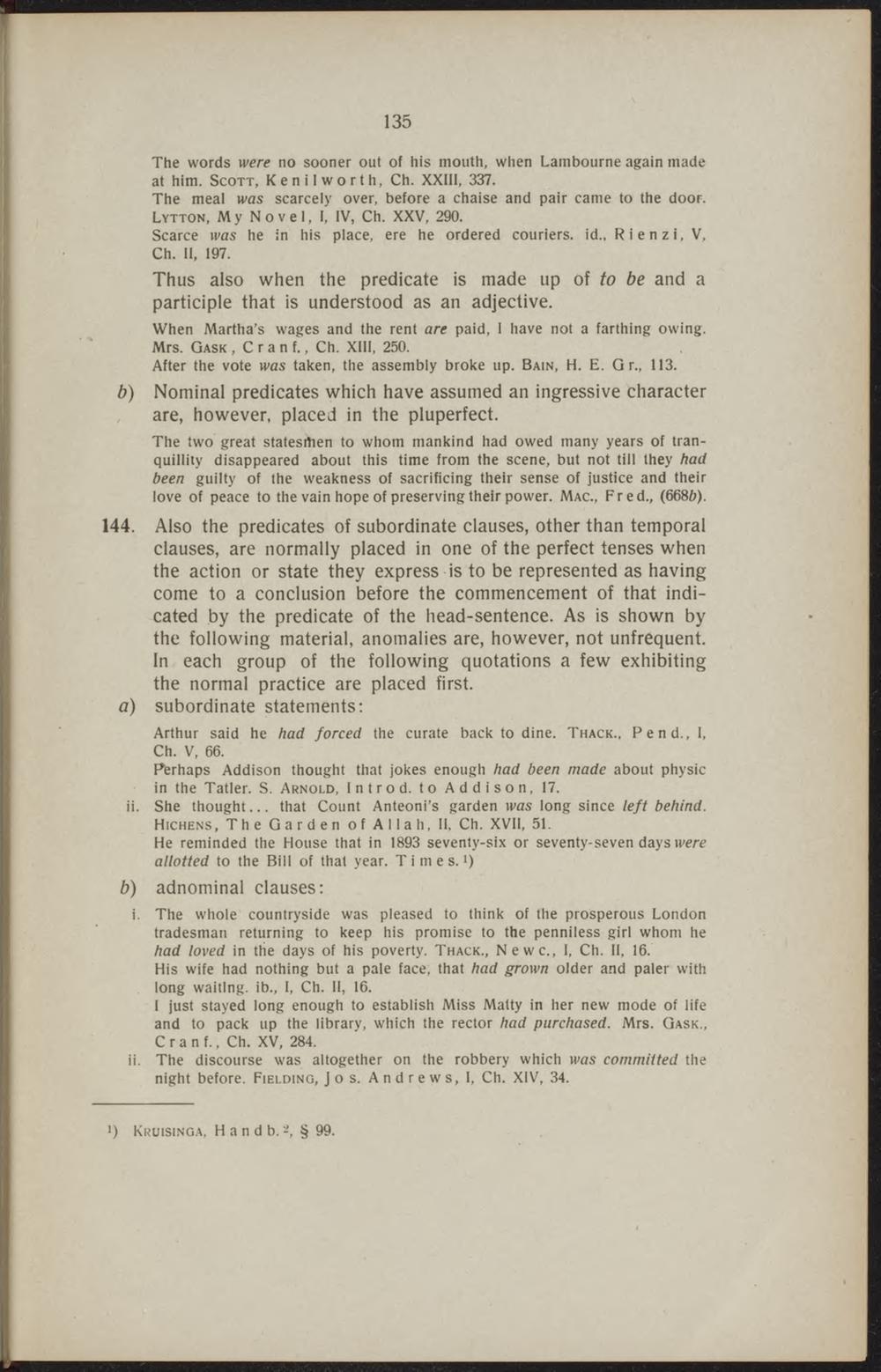 The words were no sooner out of his mouth, when Lambourne again made at him. Scott, Kenilworth, Ch. XXIII, 337.

Thus also when the predicate is made up of to be and a participle that is understood as an adjective.

After the vote was taken, the assembly broke up. Bain, H. E. Gr, 113. b) Nominal predicates which have assumed an ingressive character are, however, placed in the pluperfect.

The two great statesrhen to whom mankind had owed many years of tranquillity disappeared about this time from the scène, but not till they had been guilty of the weakness of sacrificing their sense of justice and their love of peace to the vain hope of preserving their power. Mac, Fred, (6686).

144. Also the predicates of subordinate clauses, other than temporal clauses, are normally placed in one of the perfect tenses when the action or state they express is to be represented as having come to a conclusion before the commencement of that indicated by the predicate of the head-sentence. As is shown by the following material, anomalies are, however, not unfrequent. In each group of the following quotations a few exhibiting the normal practice are placed first.

Perhaps Addison thought that jokes enough had been made about physic in the Tatler. S. Arnold, Intro d. to Addison, 17. ii. She thought... that Count Anteoni's garden was long since left behind. Hichens, The Garden of Allah, II, Ch. XVII, 51. He reminded the House that in 1893 seventy-six or seventy-seven days were allotted to the Bill of that year. Times.1)

i. The whole countryside was pleased to think of the prosperous London tradesman returning to keep his promise to the penniless girl whom he had loved in the days of his poverty. Thack, Ne wc, I, Ch. II, 16.

His wife had nothing but a pale face, that had grown older and paler with long waiting. ib, I, Ch. II, 16.

I just stayed long enough to establish Miss Matty in her new mode of life and to pack up the library, which the rector had purchased. Mrs. Gask, Cranf., Ch. XV, 284.

ii. The discourse was altogether on the robbery which was commilted the night before. Fieldino, Jos. Andrews,!, Ch. XIV, 34.