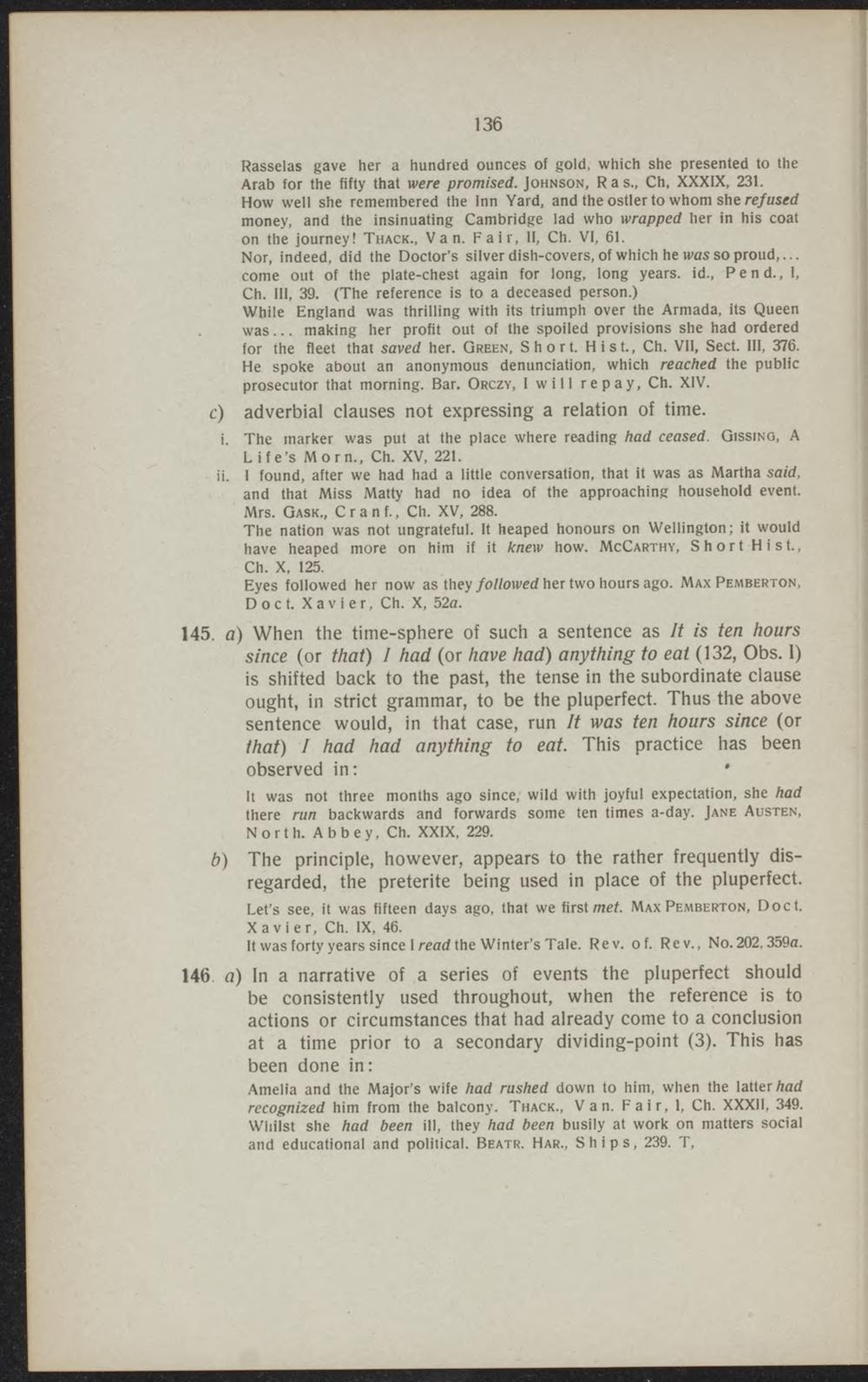 Rasselas gave her a hundred ounces of gold, which she presented to the Arab for the fifiy that were promised. Johnson, R a s., Ch. XXXIX, 231. How well she remembered the Inn Yard, and the ostler to whom she refused money, and the insinuating Cambridge lad who wrapped her in his coat on the journey! Thack, Van. Fair, II, Ch. VI, 61. Nor, indeed, did the Doctor's silver dish-covers, of which he was so proud,... come out of the plate-chest again for long, long years. id, Pend, 1, Ch. III, 39. (The reference is to a deceased person.) While England was thrilling with its triumph over the Armada, its Queen was... making her profit out of the spoiled provisions she had ordered for the fleet that saved her. Green, Short. Hist., Ch. VII, Sect. III, 376. He spoke about an anonymous denunciation, which reached the public prosecutor that morning. Bar. Orczy, I will repay, Ch. XIV.

c) adverbial clauses not expressing a relation of time.

ii. I found, after we had had a little conversation, that it was as Martha said, and that Miss Matty had no idea of the approaching household event. Mrs. Gask, Cranf., Ch. XV, 288.

The nation was not ungrateful. It heaped honours on Wellington; it would have heaped more on him if it knew how. McCarthy, Short Hist., Ch. X, 125.

145. a) When the time-sphere of such a sentence as It is ten hours

since (or that) I had (or have had) anything to eal (132, Obs. I) is shifted back to the past, the tense in the subordinate clause ought, in strict grammar, to be the pluperfect. Thus the above sentence would, in that case, run It was ten hours since (or that) I had had anything to eat. This practice has been observed in: • It was not three months ago since; wild with joyful expectation, she had there run backwards and forwards some ten times a-day. Jane Austen, N o r t h. A b b e y, Ch. XXIX, 229.

b) The principle, however, appears to the rather frequently disregarded, the preterite being used in place of the pluperfect.

146. a) In a narrative of a series of events the pluperfect should

be consistently used throughout, when the reference is to actions or circumstances that had already come to a conclusion at a time prior to a secondary dividing-point (3). This has been done in:

Amelia and the Major's wife had rushed down to him, when the latter Aad recognized him from the balcony. Thack, Van. Fair, 1, Ch. XXXII, 349. Wliilst she Aad been Hl, they Aad been busily at work on mattere social and educational and politica). Beatr. Har, S h i p s, 239. T,