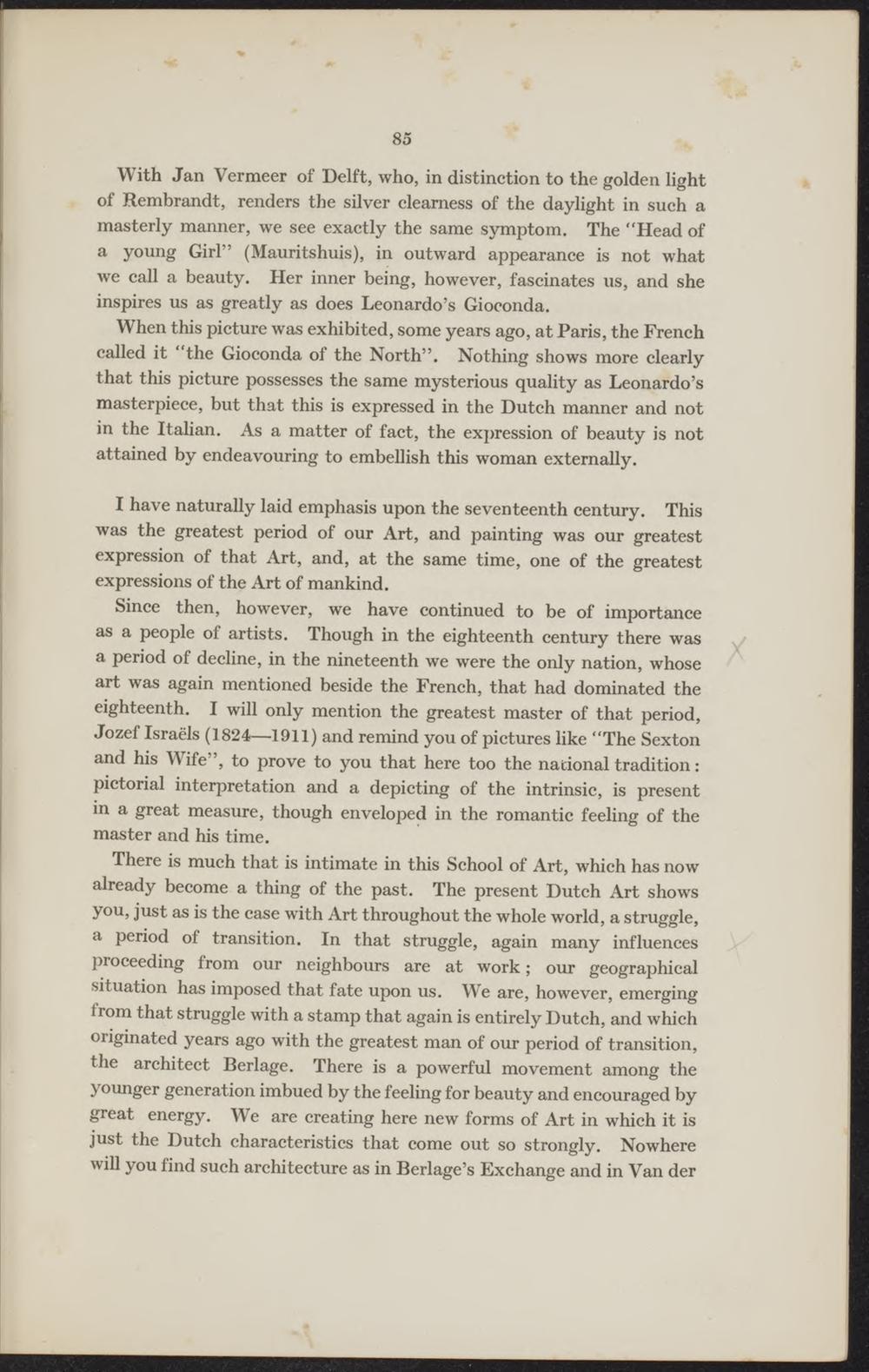 With Jan Vermeer of Delft, who, in distinction to the golden light of Rembrandt, renders the silver clearness of the daylight in such a masterly marmer, we see exactly the same symptom. The "Head of a young Girl" (Mauritshuis), in outward appearance is not what we call a beauty. Her inner being, however, fascinates us, and she inspires us as greatly as does Leonardo's Gioconda.

When this picture was exhibited, some years ago, at Paris, the French called it "the Gioconda of the North". NotHng shows more clearly that this picture possesses the same mysterious quality as Leonardo's masterpiece, but that this is expressed in the Dutch manner and not in the Italian. As a matter of fact, the expression of beauty is not attained by endeavouring to embellish this woman externally.

Since then, however, we have continued to be of importance as a people of artists. Though in the eighteenth century there was a period of decline, in the nineteenth we were the only nation, whose art was again mentioned beside the French, that had dominated the eighteenth. I will only mention the greatest master of that period, Jozef Israëls (1824—1911) and remind you of pictures like "The Sexton and his Wife", to prove to you that here too the national tradition: pictorial interpretation and a depicting of the mtrinsic, is present m a great measure, though enveloped in the romantic feeling of the master and his time.

There is much that is intimate in this School of Art, which has now already become a thing of the past. The present Dutch Art shows you, just as is the case with Art throughout the whole world, a struggle, a period of transition. In that struggle, again many influences proceeding from our neighbours are at work; our geographical situation has imposed that fate upon us. We are, however, emerging from that struggle with a stamp that again is entirely Dutch, and which originated years ago with the greatest man of our period of transition, the architect Berlage. There is a powerful movement among the younger generation imbued by the feeling for beauty and encouraged by great energy. We are creating here new forms of Art in which it is just the Dutch characteristics that come out so strongly. Nowhere will you find such architecture as in Berlage's Exchange and in Van der