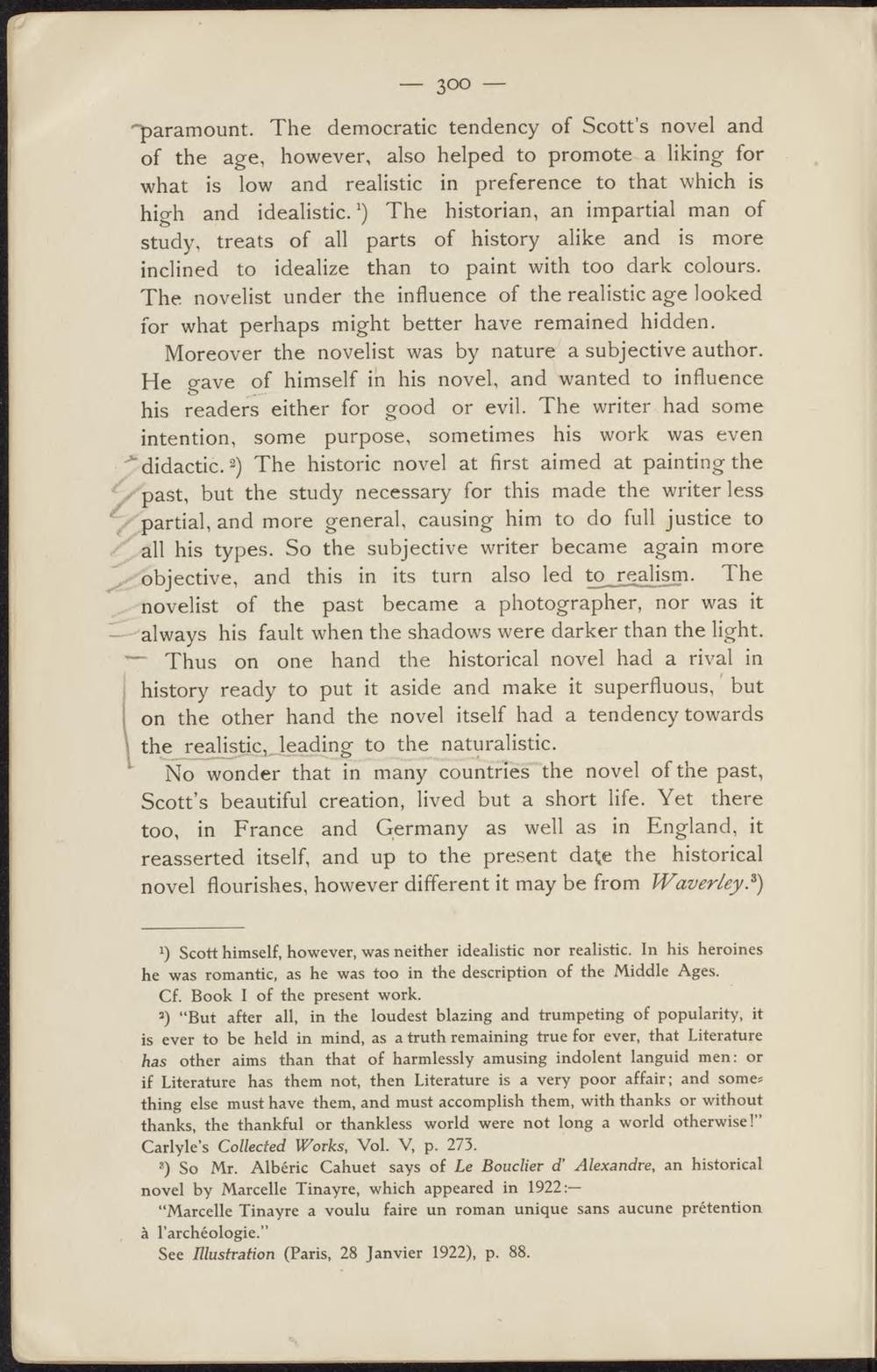 '"paramount. The democratie tendency of Scott's novel and of the age, however, also helped to promote a liking for what is low and realistic in preference to that which is high and idealistic.') The historian, an impartial man of study, treats of all parts of history alike and is more inclined to idealize than to paint with too dark colours. The novelist under the influence of the realistic age looked for what perhaps might better have remained hidden.

Moreover the novelist was by nature a subjective author. He gave of himself in his novel, and wanted to influence his readers either for good or evil. The writer had some intention, some purpose, sometimes his work was even /didactic.2) The historie novel at first aimed at painting the ^Vpast, but the study necessary for this made the writer less ^partial, and more general, causing him to do full justice to 'Oall his types. So the subjective writer became again more ^^^j^bjective, and this in its turn also led to realism. The ^-novelist of the past became a photographer, nor was it ^-"always his fault when the shadows were darker than the light. ""— Thus on one hand the historical novel had a rival in history ready to put it aside and make it superfluous, but I on the other hand the novel itself had a tendency towards \ the realistic^leading to the naturalistic.

No wonder that in many countriës~the novel of the past, Scott's beautiful creation, lived but a short life. Yet there too, in France and Germany as well as in England, it reasserted itself, and up to the present date the historical novel flourishes, however different it may be from Waverley.*)

*) Scott himself, however, was neither idealistic nor realistic. In his heroines he was romantic, as he was too in the description of the Middle Ages. Cf. Book I of the present work.

*) "But after all, in the loudest blazing and trumpeting of popularity, it is ever to be held in mind, as a truth remaining true for ever, that Literature has other aims than that of harmlessly amusing indolent languid men: or if Literature has them not, then Literature is a very poor affair; and some» thing else must have them, and must accomplish them, with thanks or without thanks, the thankful or thankless world were not long a world otherwise!" Carlyle's Collected Works, Vol. V, p. 273.