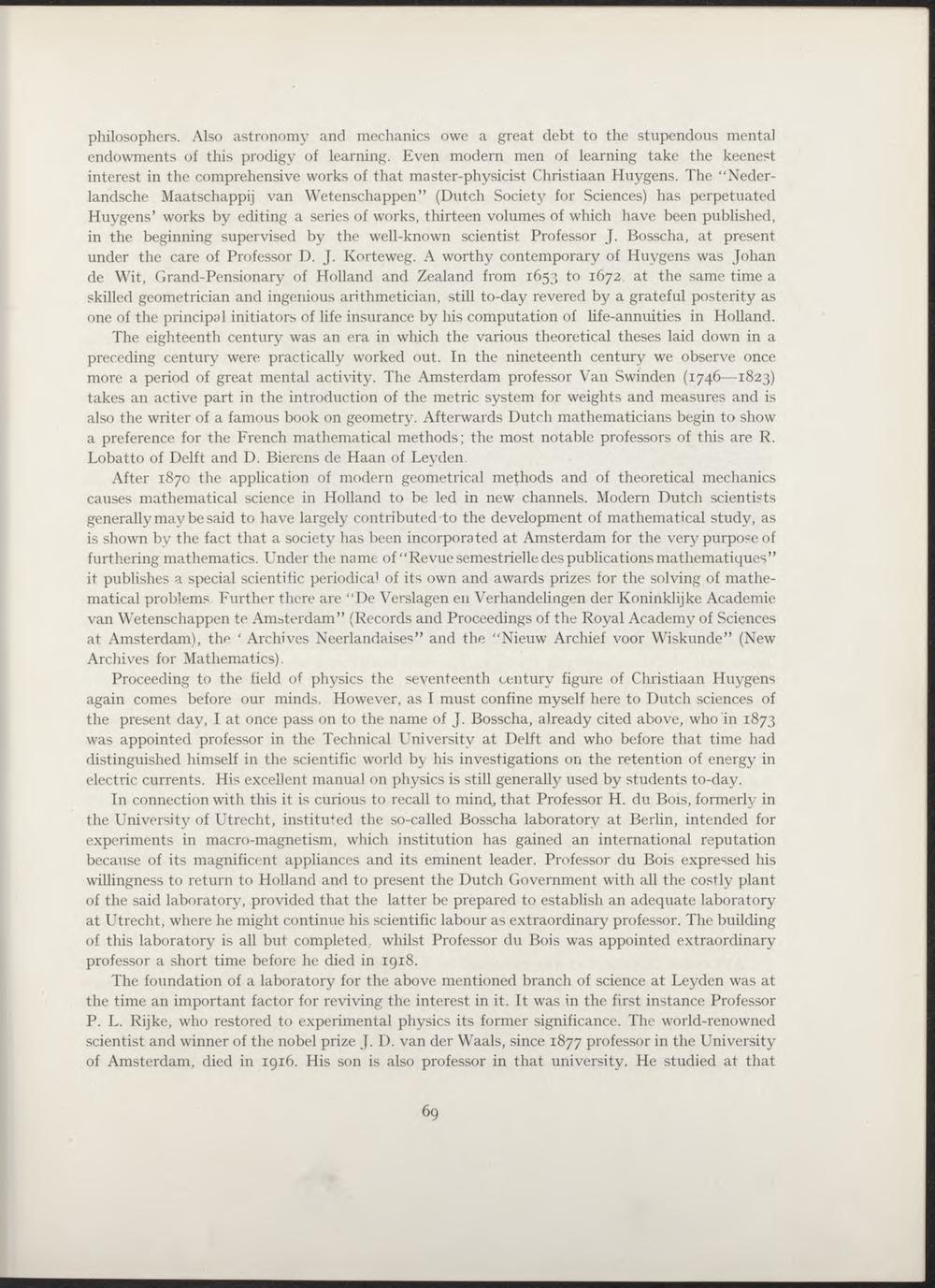 philosophers. Also astronomy and mechanics owe a great debt to the stupendous mental endowments of this prodigy of learning. Even modern men of learning take the keenest interest in the comprehensive works of that master-physicist Christiaan Huygens. The "Nederlandsche Maatschappij van Wetenschappen" (Dutch Society for Sciences) has perpetuated Huygens' works by editing a series of works, thirteen volumes of which have been published, in the beginning supervised by the well-known scientist Professor J. Bosscha, at present under the care of Professor D. J. Korteweg. A worthy contemporary of Huygens was Johan de Wit, Grand-Pensionary of Holland and Zealand from 1653 to 1672 at the same time a skilled geometrician and ingenious arithmetician, still to-day revered by a grateful posterity as one of the principal initiators of life insurance by his computation of life-annuities in Holland.

The eighteenth century was an era in which the various theoretical theses laid down in a preceding century were practically worked out. In the nineteenth century we observe once more a period of great mental activity. The Amsterdam professor Van Swinden (1746—1823) takes an active part in the introduction of the metric system for weights and measures and is also the writer of a famous book on geometry. Afterwards Dutch mathematicians begin to show a preference for the French mathematical methods; the most notable professors of this are R. Lobatto of Delft and D. Bierens de Haan of Leyden.

After 1870 the application of modern geometrical methods and of theoretical mechanics causes mathematical science in Holland to be led in new channels. Modern Dutch scientists generally may be said to have largely contributed-to the development of mathematical study, as is shown by the fact that a society has been incorporated at Amsterdam for the very purpose of furthering mathematics. Under the name of "Revue semestrielle des publicationsmathematiques" it pubhshes a special scientific periodica! of its own and awards prizes for the solving of mathematical problems. Further there are "De Verslagen en Verhandelingen der Koninklijke Academie van Wetenschappen te Amsterdam" (Records and Proceedings of the Royal Academy of Sciences at Amsterdam), the ' Archives Neerlandaises" and the "Nieuw Archief voor Wiskunde" (New Archives for Mathematics).

Proceeding to the field of physics the seventeenth century figure of Christiaan Huygens again comes before our minds. However, as I must confine myself here to Dutch sciences of the present day, I at once pass on to the name of J. Bosscha, already cited above, who in 1873 was appointed professor in the Technical University at Delft and who before that time had distinguished himself in the scientific world by his investigations on the retention of energy in electric currents. His excellent manual on physics is still generally used by students to-day.

In connection with this it is curious to recall to mind, that Professor H. du Bois, formerly in the University of Utrecht, instituted the so-called Bosscha laboratory at Berlin, intended for experiments in macro-magnetism, which institution has gained an international reputation because of its magnificent appliances and its eminent leader. Professor du Bois expressed his wülingness to return to Holland and to present the Dutch Government with all the costly plant of the said laboratory, provided that the latter be prepared to establish an adequate laboratory at Utrecht, where he might continue his scientific labour as extraordinary professor. The building of this laboratory is all but completed, whilst Professor du Bois was appointed extraordinary professor a short time before he died in 1918.

The foundation of a laboratory for the above mentioned branch of science at Leyden was at the time an important factor for reviving the interest in it. It was in the first instance Professor P. L. Rijke, who restored to experimental physics its former significance. The world-renowned scientist and winner of the nobel prize J. D. van der Waals, since 1877 professor in the University of Amsterdam, died in 1916. His son is also professor in that university. He studied at that