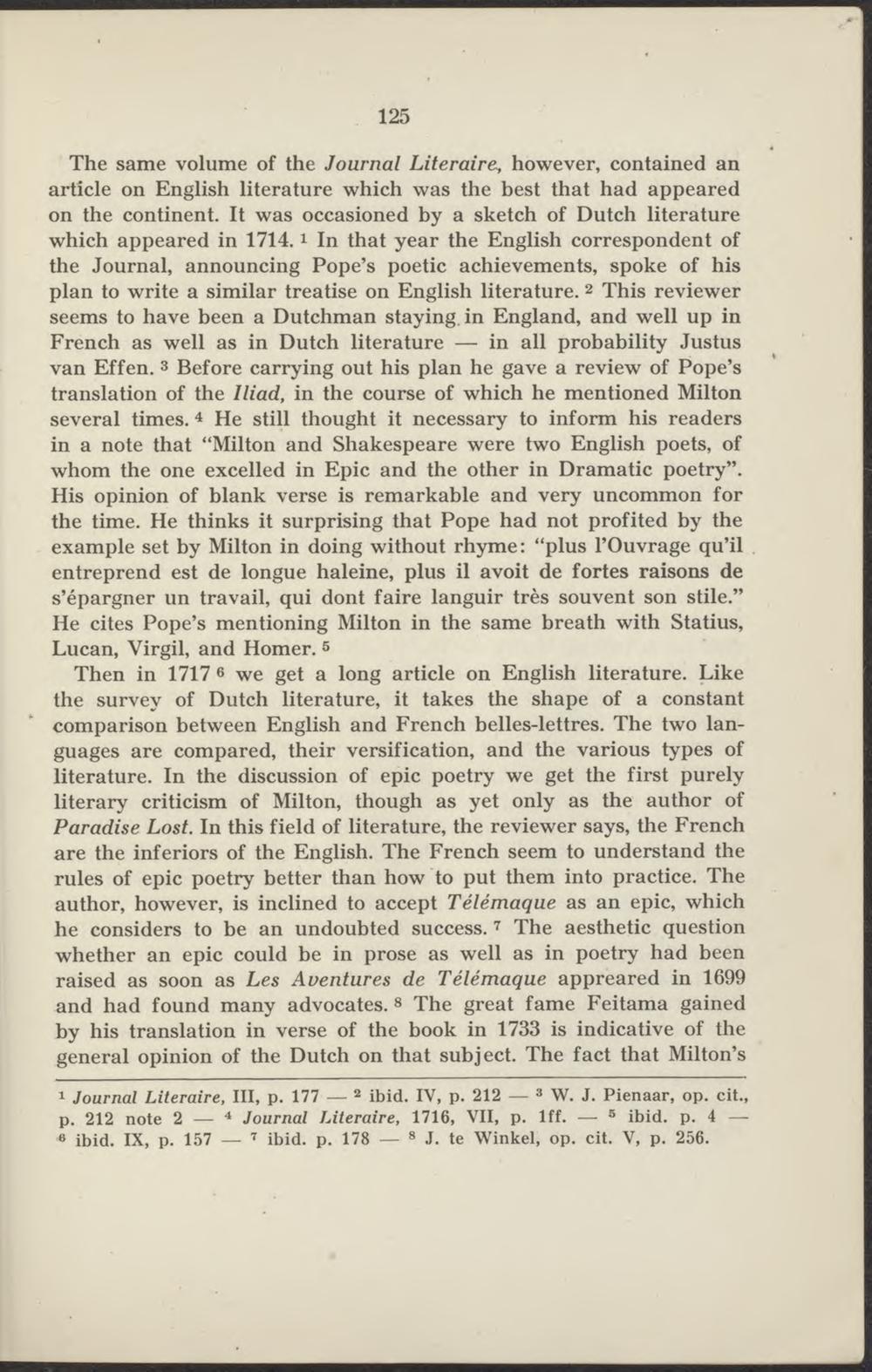 The same volume of the Journal Literaire, however, contained an article on English literature which was the best that had appeared on the continent. It was occasioned by a sketch of Dutch literature which appeared in 1714.1 In that year the English correspondent of the Journal, announcing Pope's poetic achievements, spoke of his plan to write a similar treatise on English literature.2 This reviewer seems to have been a Dutchman staying in England, and well up in French as well as in Dutch literature — in all probability Justus van Effen. 3 Before carrying out his plan he gave a review of Pope's translation of the Wad, in the course of which he mentioned Milton several times. 4 He still thought it necessary to inform his readers in a note that "Milton and Shakespeare were two English poets, of whom the one excelled in Epic and the other in Dramatic poetry". His opinion of blank verse is remarkable and very uncommon for the time. He thinks it surprising that Pope had not profited by the example set by Milton in doing without rhyme: "plus POuvrage qu'il entreprend est de longue haleine, plus il avoit de fortes raisons de s'épargner un travati, qui dont faire languir trés souvent son stile." He cites Pope's mentioning Milton in the same breath with Statius, Lucan, Virgil, and Homer. 5

Then in 1717 6 we get a long article on English literature. Like the survey of Dutch literature, it takes the shape of a constant comparison between English and French belles-lettres. The two languages are compared, their versification, and the various types of literature. In the discussion of epic poetry we get the first purely literary criticism of Milton, though as yet only as the author of Paradise Lost. In this field of literature, the reviewer says, the French are the inferiors of the EngUsh. The French seem to understand the rules of epic poetry better than how 'to put them into practice. The author, however, is inclined to accept Télémaque as an epic, which he considers to be an undoubted success. 7 The aesthetic question whether an epic could be in prose as well as in poetry had been raised as soon as Les Aventures de Télémaque appréared in 1699 and had found many advocates.8 The great fame Feitama gained by his translation in verse of the book in 1733 is indicative of the general opinion of the Dutch on that subject. The fact that MUton's