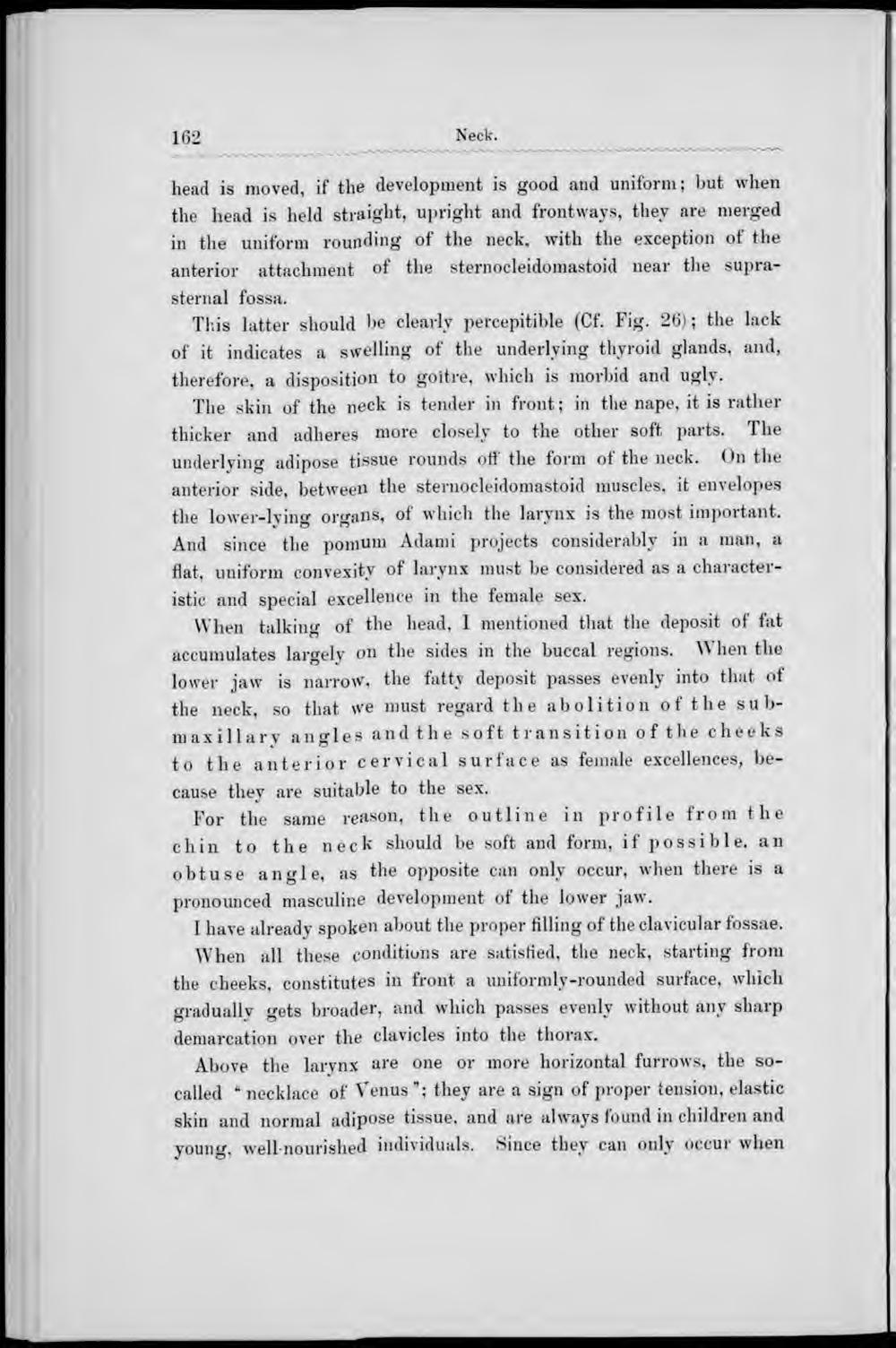 liead is moved, if the development is good and uniform; but when the liead is held straight, upright and frontvvays, thev are nierged in the uniform rounding of the neck, with the exception of the anterior attacliment of the sternocleidomastoid near the suprasternal fossa.

This latter should be clearly percepitible (Cf. Fig. 26); the lack of it indicates a swelling of the underlving thyroid glands, and, therefore, a disposition to goitre, which is morbid and ugly.

The skin of the neck is tender in front; in the nape, it is rather thicker and adheres more closely to the otlier soft parts. The underlying adipose tissue rounds ott' the form of the neck. On the anterior side, between the sternocleidomastoid muscles, it envelopes the lower-lying organs, of which the larynx is the most important. And since the pomum Adami projects considerably in a man, a flat, uniform convexity of larynx must be considered as a characteristic and special excellence in the female sex.

When talking of the liead, I mentioned that the deposit of fat accumulates largely on the sides in the buccal regions. When the lovver jaw is narrow, the fatty deposit passes evenly into that of the neck, so that \ve must regard the abolition of the submaxillarv angles and the soft transition of the cheeks to the anterior cervical sur face as female excellences, because tliey are suitable to the sex.

For the same reason, the outline in profile from the chin to the neck should be soft and form, ifpossible, an obtuse angle, as the opposite can onlv occur, when there is a pronounced masculine development of the lower jaw.

I have already spoken about the proper filling of the clavicular fossae.

When all these conditions are satisfied, the neck, starting from the cheeks, constitutes in front a uniformly-rounded surface, which graduallv gets broader, and which passes evenly without any sharp demarcation over the clavicles into the thorax.

Above the larynx are one or more horizontal furrows, the socalled * necklace of Venus"; they are a sign of proper tension, elastic skin and normal adipose tissue, and are always found in children and younf, well-nounshed individuals. Since they can only occui when