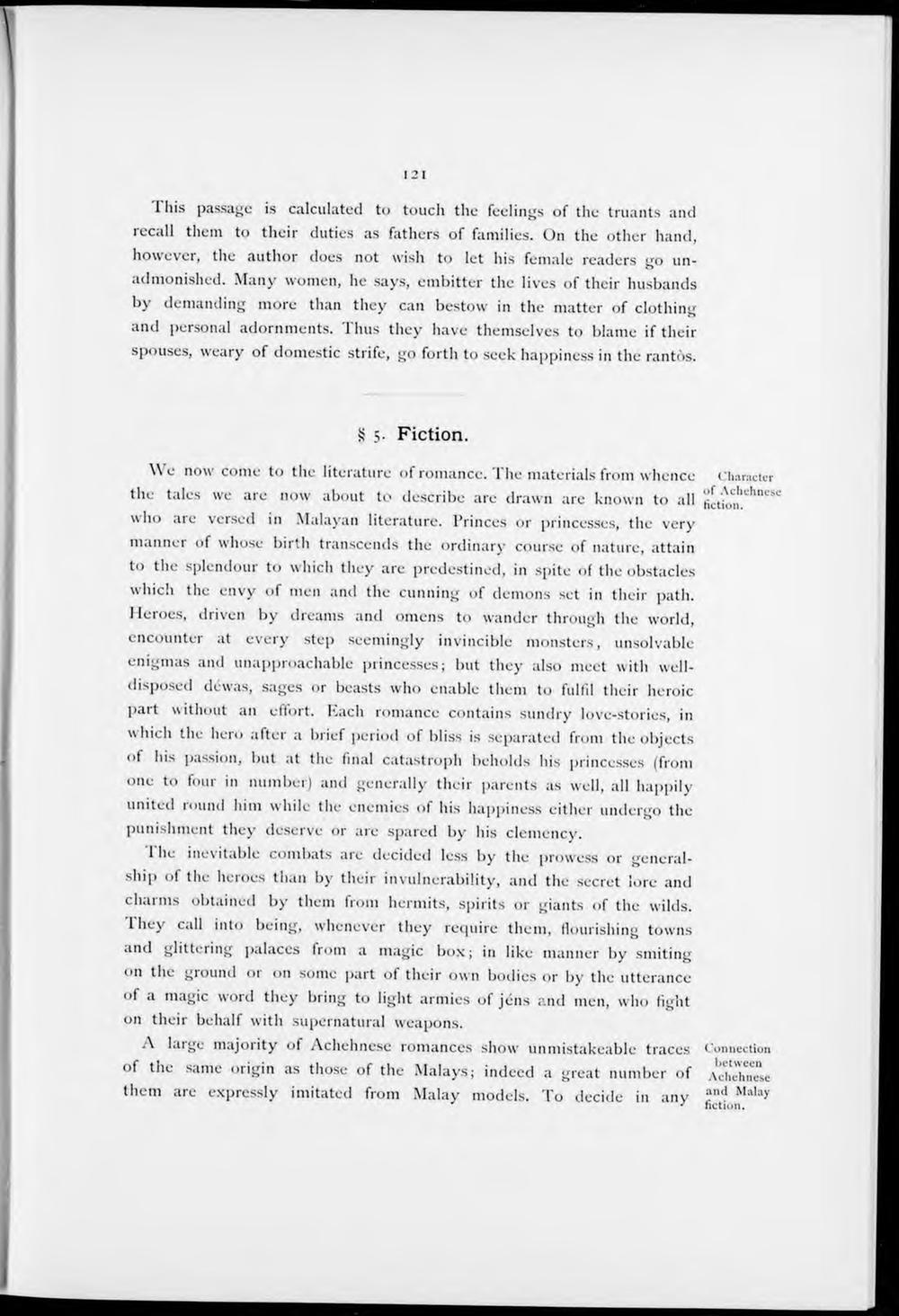 This passage is calculated to touch the feelings of the truants and ïccall them to their duties as fathcrs of families. On the other hand, however, the author does not wish to let his female readers go unadmonished. Many women, he says, embitter the lives of their husbands by demanding more than they can bestovv in the matter of clothing and personal adornments. Thus they have themselves to blame if their spouses, vveary of domestic strife, go forth to seek happiness in the rantós.

\\ e now come to the literature of romance. 1 he materials from whence Character the tales we are now about to describe are drawn are known to all who are versed in Malayan literature. 1'rinces or princesses, the very manner of whose birth transcends the ordinary course of nature, attain to the splendour to which they are predestined, in spite of the obstacles which the envy of men and the cunning of demons set in their path.

Heroes, driven by dreams and omens to wander through the world,

encounter at every step seemingly invincible monsters, unsolvable enigmas and unapproachable princesses; but they also meet with welldisposed déwas, sages or beasts who enable them to fulfil their heroic part without an efibrt. Each romance contains sundry love-stories, in which the hero after a brief period of bliss is separated from the objects of his passion, but at the final catastroph beholds his princesses (from one to four in number) and generally their parents as well, all happily united round him while the enemies of his happiness either undergo the punishment they deserve or are spared by his clemency.

1 he inevitable combats are decided less by the prowess or generalship of the heroes than by their invulnerability, and the secret lore and charms obtained by them from hermits, spirits or giants of the wilds.

1 hey call into being, whenever they require them, flourishing towns and glittering palaces from a magie box; in like manner by smiting on the ground or on some part of their own bodies or by the utterance of a magie word they bring to light armies of jéns and men, who fight on their behalf with supernatural weapons.

A large majority of Achelmese romances show unmistakeable traces Connection of the same origin as those of the Malays; indeed a great number of Achehnese them are expressly imitated from Malay models. To decide in anv and Malay