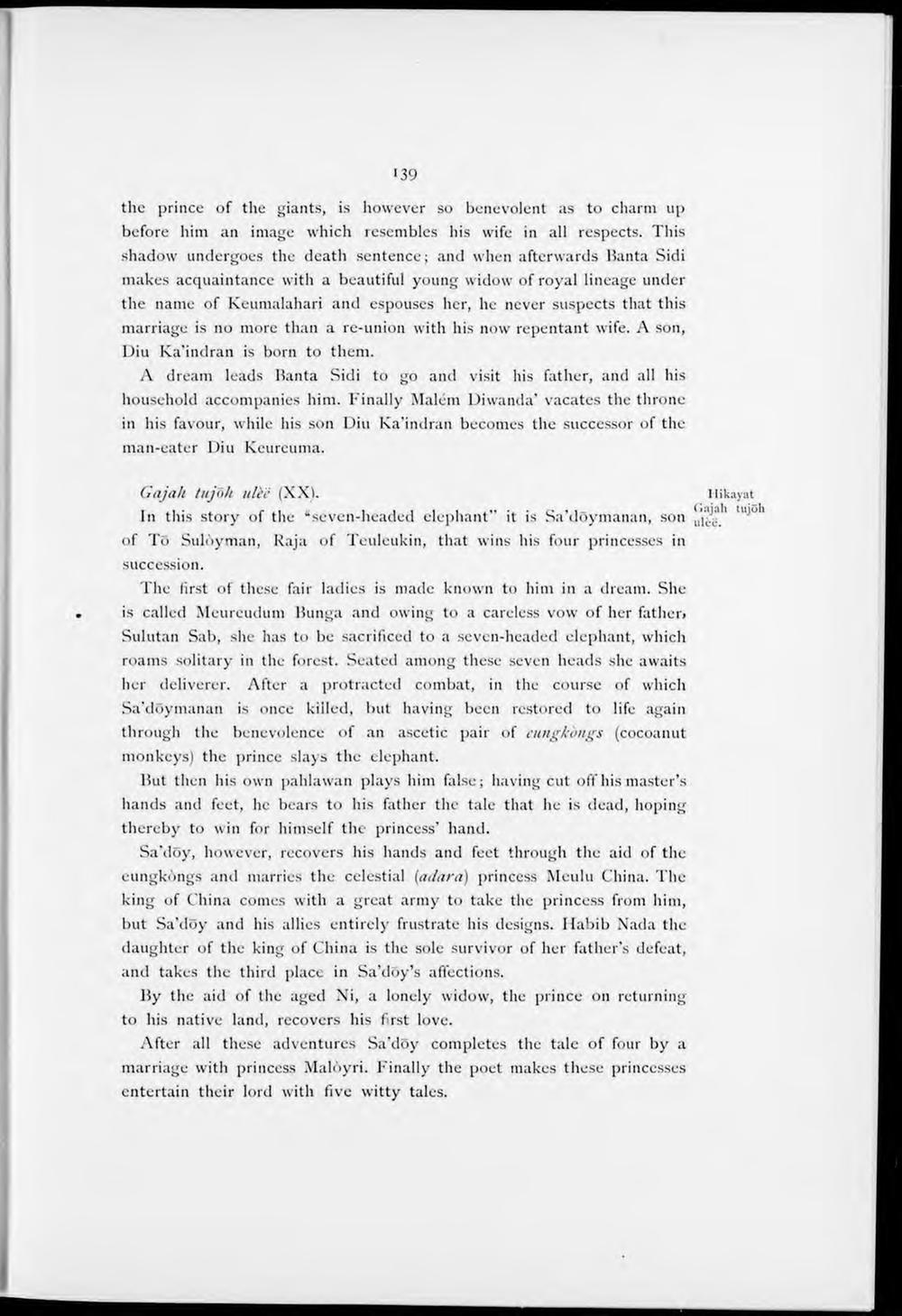 the prince of the giants, is however so benevolent as to charm up before him au image which resembles his wife in all respects. Tliis shadow undergoes the death sentence; and when afterwards Banta Sidi inakes acquaintance with a beautiful young widovv of royal lineage under the name of Keumalahari and espouses her, he never suspects that tliis marriage is no more than a re-union with his novv repentant wife. A son, Diu Ka'indran is born to them.

A dream leads Banta Sidi to go and visit his father, and all his household accompanies him. Finally Malém Diwanda' vacates the throne in his favour, while his son Diu Ka'indran becomes the successor of the man-eater Diu Keureuma.

In tliis story of the "seven-headed elephant" it is Sa'doymanan, son t"''uh

of Tö Sulóyman, Raja of Teuleukin, that wins his four princesses in succession.

The first of these fair ladies is made known to him in a dream. She is called Meureudum Bunga and owing to a careless vow of her father»

Sulutan Sab, she has to be sacrificed to a seven-headed elephant, which roams solitary in the forest. Seated among these seven heads she awaits her deliverer. After a protracted combat, in the course of which Sa'doymanan is once killed, but having been restored to life again through the benevolence of an ascetic pair of eungkongs (cocoanut monkeys) the prince slays the elephant.

But then his own pahlawan plays him false; having cut oflfhis master's hands and feet, he bears to his father the tale that he is dead, hoping thereby to win for himself the princess' hand.

Sa'döy, however, recovers his hands and feet through the aid of the eungkongs and marries the celestial (adara) princess Meulu China. The king of China comes with a great army to take the princess from him, but Sa'döy and his allies entirely frustrate his designs. Habib Nada the daughter of the king of China is the sole survivor of her father's defeat,

and takes the third place in Sa'döy's affections.

By the aid of the aged Ni, a lonely widow, the prince on returning to his native land, recovers his first love.

After all these adventures Sa'döy completes the tale of four by a marriage with princess Malöyri. Finally the poet makes these princesses entertain their lord with five witty tales.