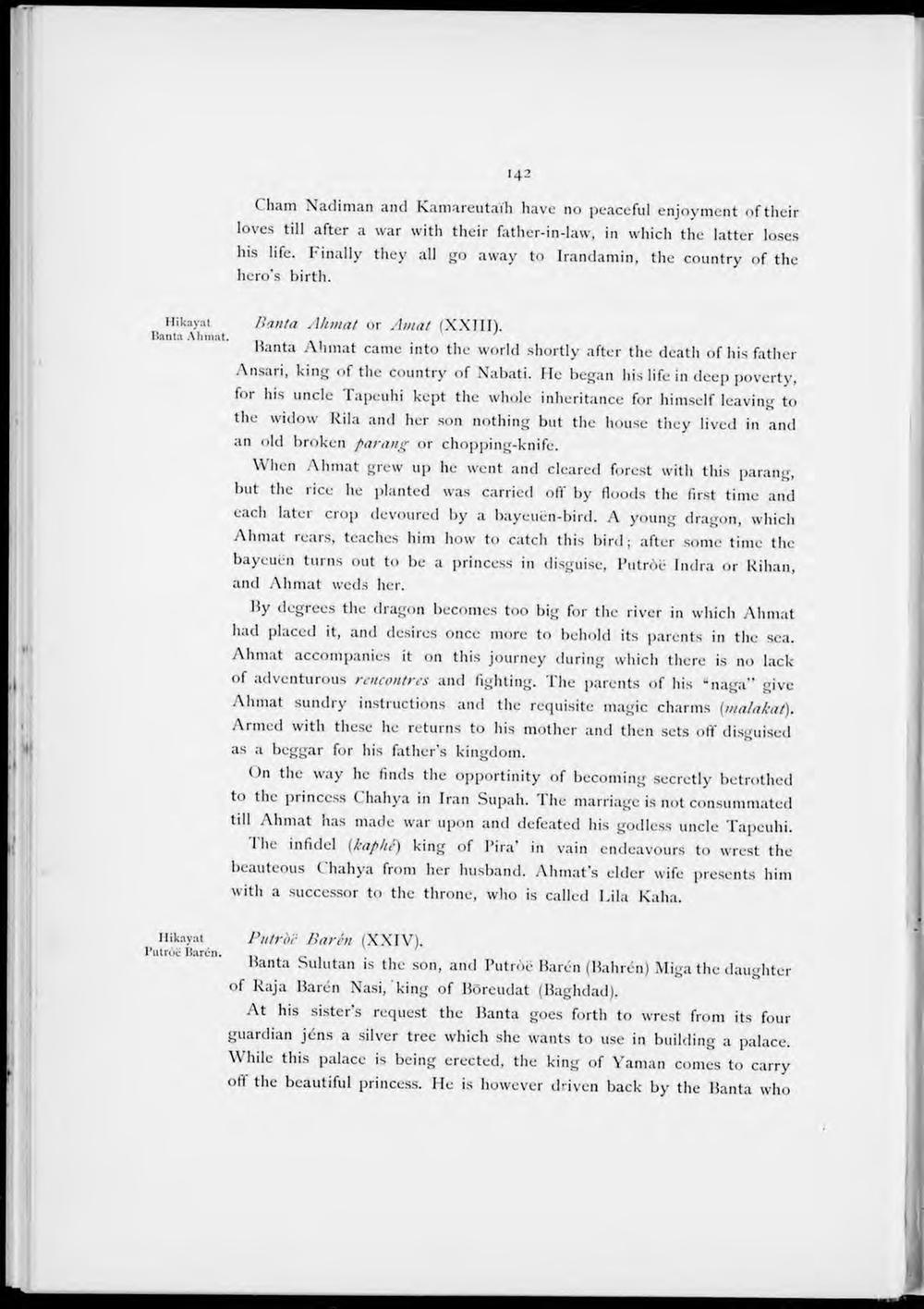 ( ham Nadiman and Kamareutaïh have 110 peaceful enjoyment of their loves till after a war with their father-in-law, in which the latter loses his life. Finally they all go away to Irandamin, the country of the hero's birth.

Banta Ahmat came into the world shortly after the death of his father Ansari, king of the country of Nabati. He began his life in deep poverty, for his uncle Tapeuhi kept the whole inheritance for himself leaving to the widow Rila and her son nothing but the house they lived in and an old broken parang or chopping-knife.

When Ahmat grew up he went and cleared forest with this parang, but the rice he planted was carried off by floods the first time and each latei erop devoured by a bayeuën-bird. A young dragon, which Ahmat rears, teaches him how to catch this birtl; after some time the bayeuën turns out to be a princess in disguise, Putróë Indra or Rihan, and Ahmat weds her.

By degrees the dragon becomes too big for the river in which Ahmat had placed it, and desires once more to behold its parents in the sea. Ahmat accompanies it on this journey during which there is no lack of adventurous rencontres and fighting. The parents of his "naga" give Ahmat sundry instructions and the requisite magie charms [malakat). Armed with these he returns to his mother and then sets ofif disguised as a beggar for his father's kingdom.

On the way he finds the opportinity of becoming secretly betrothed to the princess Chahya in Iran Supah. The marriage is not consummated till Ahmat has made war upon and defeated his godless uncle Tapeuhi.

I he infidel (kaphe) king of 1'ira in vain endeavours to wrest the beauteous Chahya from her husband. Ahmat's elder wife presents him with a successor to the throne, who is called Lila Kaha.

At his sister's request the Banta goes forth to wrest from its four guardian jéns a silvcr tree which she wants to use in building a palace. While this palace is being erected, the king of Yaman comes to carry oft the beautiful princess. He is however driven back by the Banta who