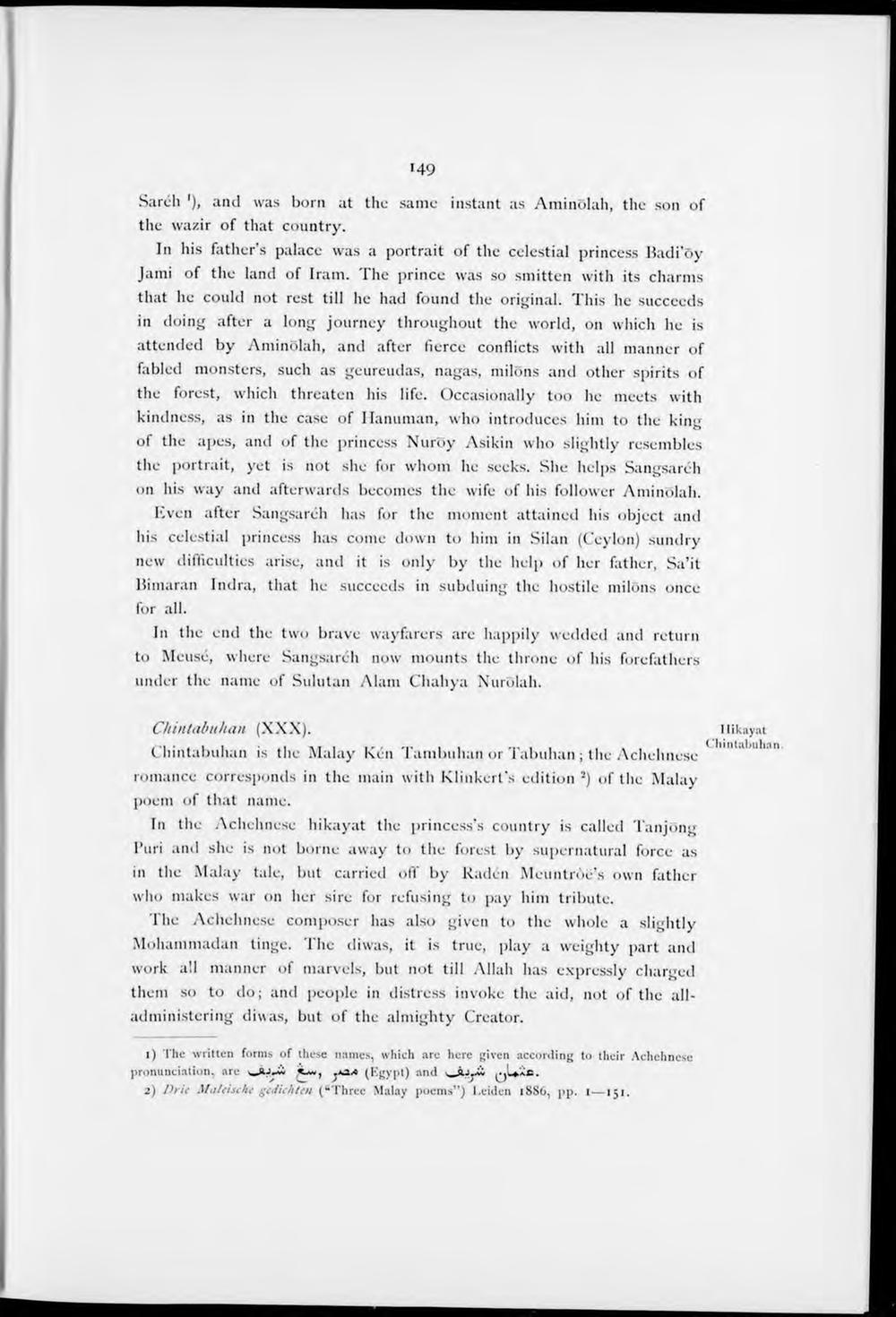 Saréli '), and was born at the sainc instant as Aminolah, the son of the wazir of that country.

In his father's palace was a portrait of the celestial princess Badi'öy Jami of the land of Iram. The prince was so smitten with its charms that he could not rest till he had found the original. This he succeeds in doing after a long journey throughout the world, on which he is attended by Aminolah, and after fierce conflicts with all manner of fabled monsters, such as geureudas, nagas, milöns and other spirits of the forest, which threaten his life. Occasionally too he meets with kindness, as in the case of Ilanuman, who introducés him to the kin"-

of the apes, and of the princess Nuröy Asikin who slightly resembles the portrait, yet is not she for whom he secks. She helps Sangsaréh on his way and afterwards becomes the wife of his follower Aminolah.

Even after Sangsaréh lias for the moment attained his object and his celestial princess lias come down to him in Silan (Ceylon) sundry new difficulties arise, and it is only by the help of her father, Sa'it Bimaran Indra, that he succeeds in subduing the hostile milöns once for all.

In the end the two brave wayfarers are happily wedded and return to Meusé, where Sangsaréh now mounts the throne of his forefathers under the name of Sulutan Alam Chahya Nurölah.

In the Achehnese hikayat the princess's country is called Tanjöng Puri and she is not borne away to the forest by supernatural force as in the Malay tale, but carried off by Radén Meuntroë's own father who makes war on her sire for refusing to pay him tribute.

The Achehnese composer has also given to the whole a slightly Mohammadan tinge. The diwas, it is true, play a weighty part and work all manner of marvels, but not till Allah has expressly charged them so to do; and people in distress invoke the aid, not of the alladministering diwas, but of the almighty Creator.

1) The written forms of these names, which are here given according to their Achehnese pronunciation, are (Egypt) and qU.Xc.