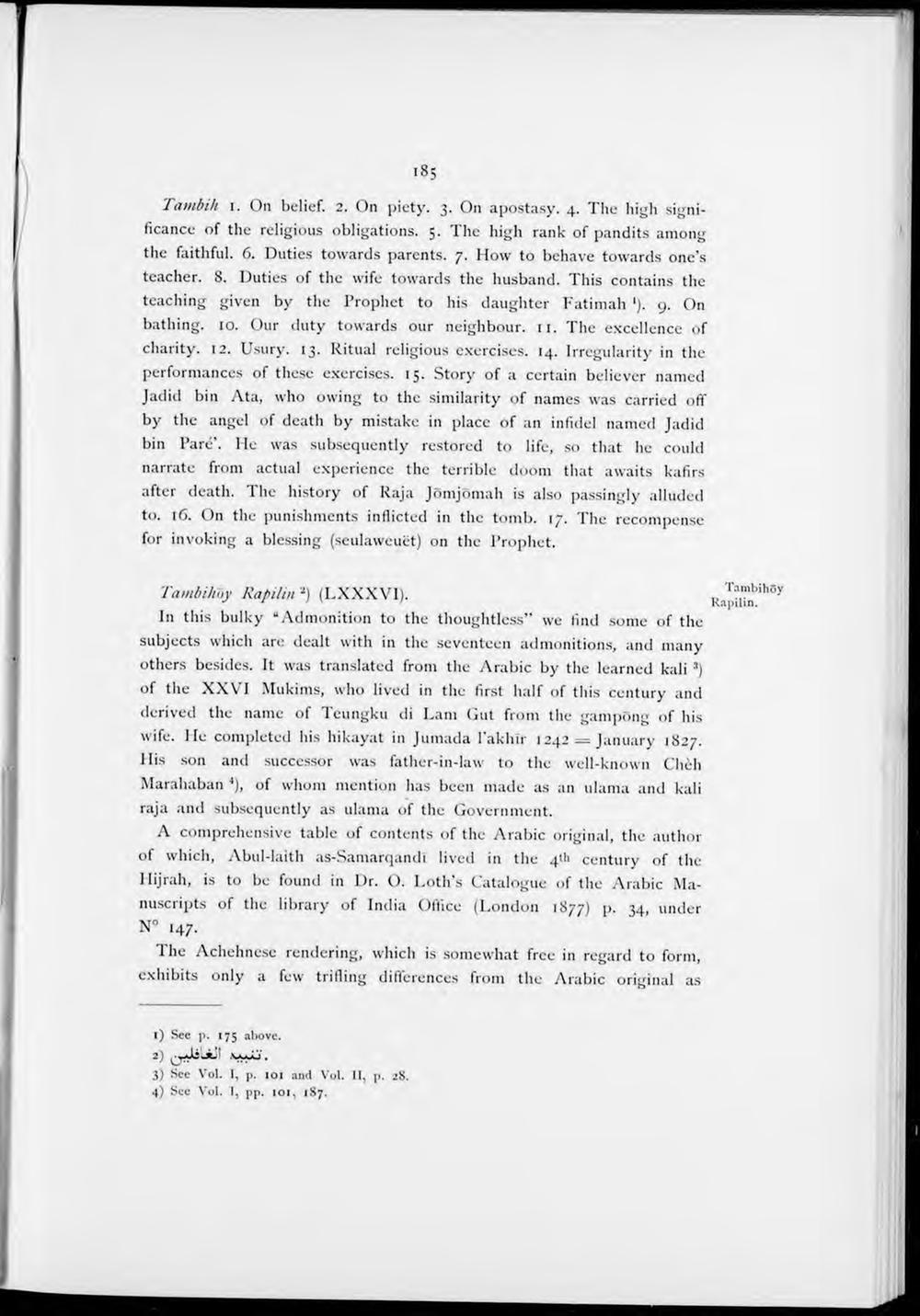 Tambih i. On belief. 2. On piety. 3. On apostasy. 4. The high significance of the religious obligations. 5. The high rank of pandits among the faithful. 6. Duties towards parents. 7. How to behave towards one's teacher. 8. Duties of the wife towards the husband. This contains the teaching given by the 1'rophet to his daughter Fatimah '). 9. On bathing. 10. Our duty towards our neighbour. 11. The excellence of charity. 12. Usury. 13. Ritual religious exercises. 14. Irregularity in the performances of these exercises. 15. Story of a certain believer named Jadid bin Ata, who owing to the similarity of names was carried off by the angel of death by mistake in place of an infidel named Jadid bin Paré'. He was subsequently restored to life, so that he could narratc from actual experience the terrible doom that awaits kafirs after death. The history of Raja Jömjömah is also passingly alluded to. 16. On the punishments inflicted in the tomb. 17. The recompense for invoking a blessing (seulaweuët) on the Prophet.

I11 this bulky "Admonition to the thoughtless" we find some of the subjects which are dealt with in the seventeen admonitions, and many others besides. It was translated from the Arabic by the learned kali 3)

of the XXVI Mukims, who lived in the first half of this century and derived the name of Teungku di Lam Gut from the gampöng of his wife. He completed his hikayat in Jumada 1'akhïr I242 = january 1827.

His son and successor was father-in-law to the well-known Chèh Marahaban 4), of whom mention has been made as an ulama and kali raja and subsequently as ulama of the Government.

A comprehensive table of contents of the Arabic original, the author of which, Abul-laith as-Samarqandi lived in the 4111 century of the I Iijrah, is to be found in Dr. O. Loth's Catalogue of the Arabic Manuscripts of the library of India Office (London 1877) p. 34, under N° 147-

The Achehnese rendering, which is somewhat free in regard to form,

exhibits only a few trifling diflerences from the Arabic original as