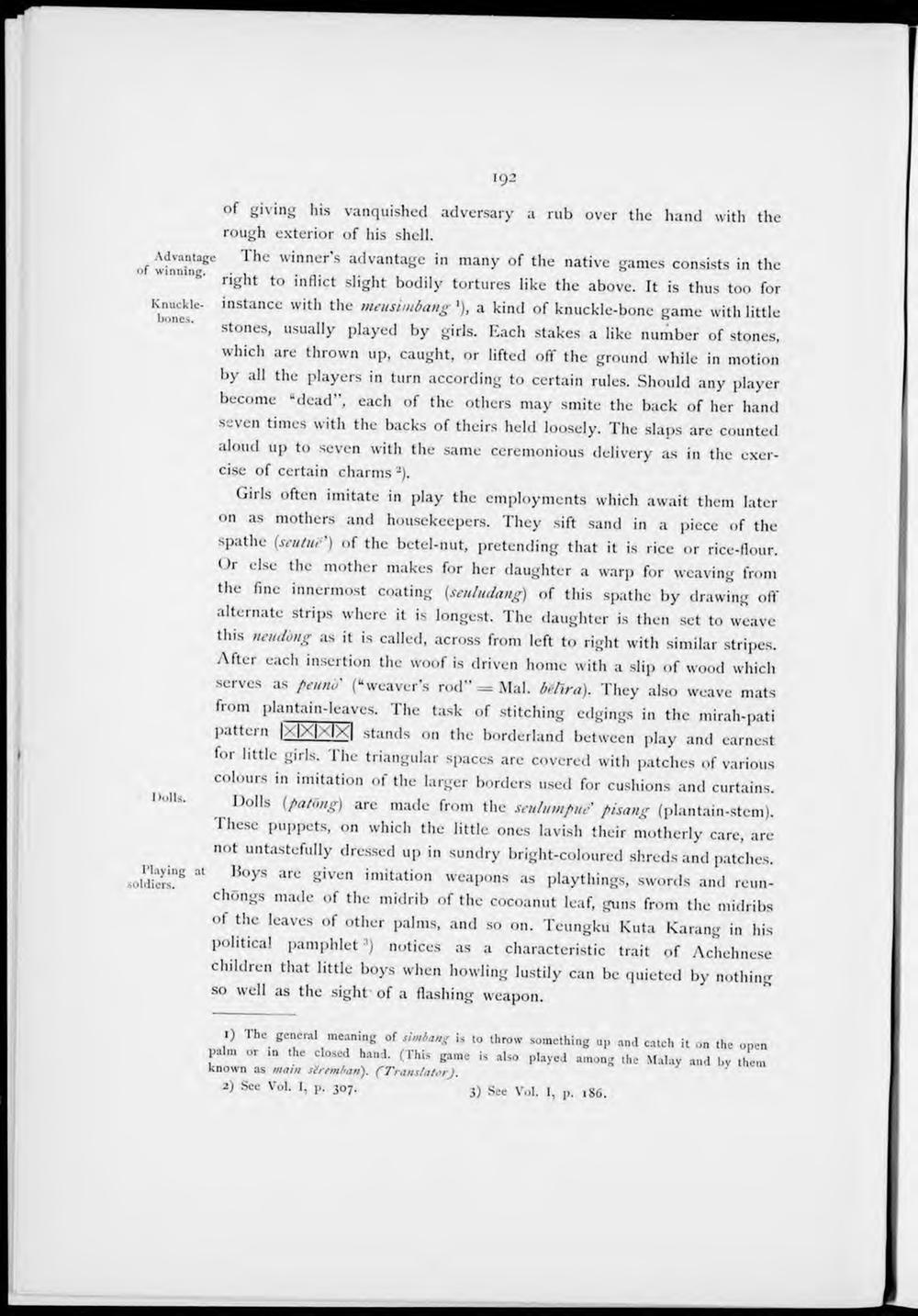 of giving his vanquished adversary a rub over the hand with the rough exterior of his shell.

right to inflict slight bodily tortures like the above. It is thus too for Kbontle~ U1Stancc with the "fusiwbang '), a kind of knuckle-bone game with little stones, usually played by girls. Eacli stakes a like number of stones, which are thrown up, caught, or lifted ofif the ground while in motion by all the players in turn according to certain rules. Should any player become "dead , each of the others may smite the back of her hand seven times with the backs of theirs held loosely. The slaps are counted aloud up to seven with the same ceremonious delivery as in the exercise of certain charms 2).

Girls often imitate in play the employments which await them later on as mothers and housekeepers. They sift sand in a piece of the spathe (seutiif') of the betel-nut, pretending that it is rice or rice-flour. Or else the mother makes for her daughter a warp for weaving from the fine innermost coating (seuludang) of this spathe by drawing off alternate strips where it is longest. The daughter is then set to weave this neudbng as it is called, across from left to right with similar stripes. After each insertion the woof is driven home with a slip of wood which serves as peuno («weaver's rod" = Mal. bêtïra). They also weave mats from plantain-leaves. The task of stitching edgings in the mirah-pati pattern |x|X|x|Xl stands on the borderland between play and earncst for little girls. The triangular spaces are covered with patches of various colours in imitation of the larger borders used for cushions and curtains.

Dolls [patong) are made from the seulumpue' pisang (plantain-stem). Ihese puppets, on which the little ones lavish their motherly care, are not untastefully dressed up in sundry bright-coloured shreds and patches.

so,diXng at BoyS are *'ven imitation weapons as playthings, swords and reunchongs made of the midrib of the cocoanut leaf, guns from the midribs ot the leaves of other palms, and so on. Teungku Kuta Karang in his political pamphlet ') notices as a characteristic trait of Achehnese children that little boys when howling lustily can be quieted by nothing so well as the sight' of a flashing weapon.

1) The general meaning of sin,bang is to throw somcthing up and catch it on the open palm or in the closed hand. (This game is also played among the Malay and by them known as mam sértmban). (Translater).