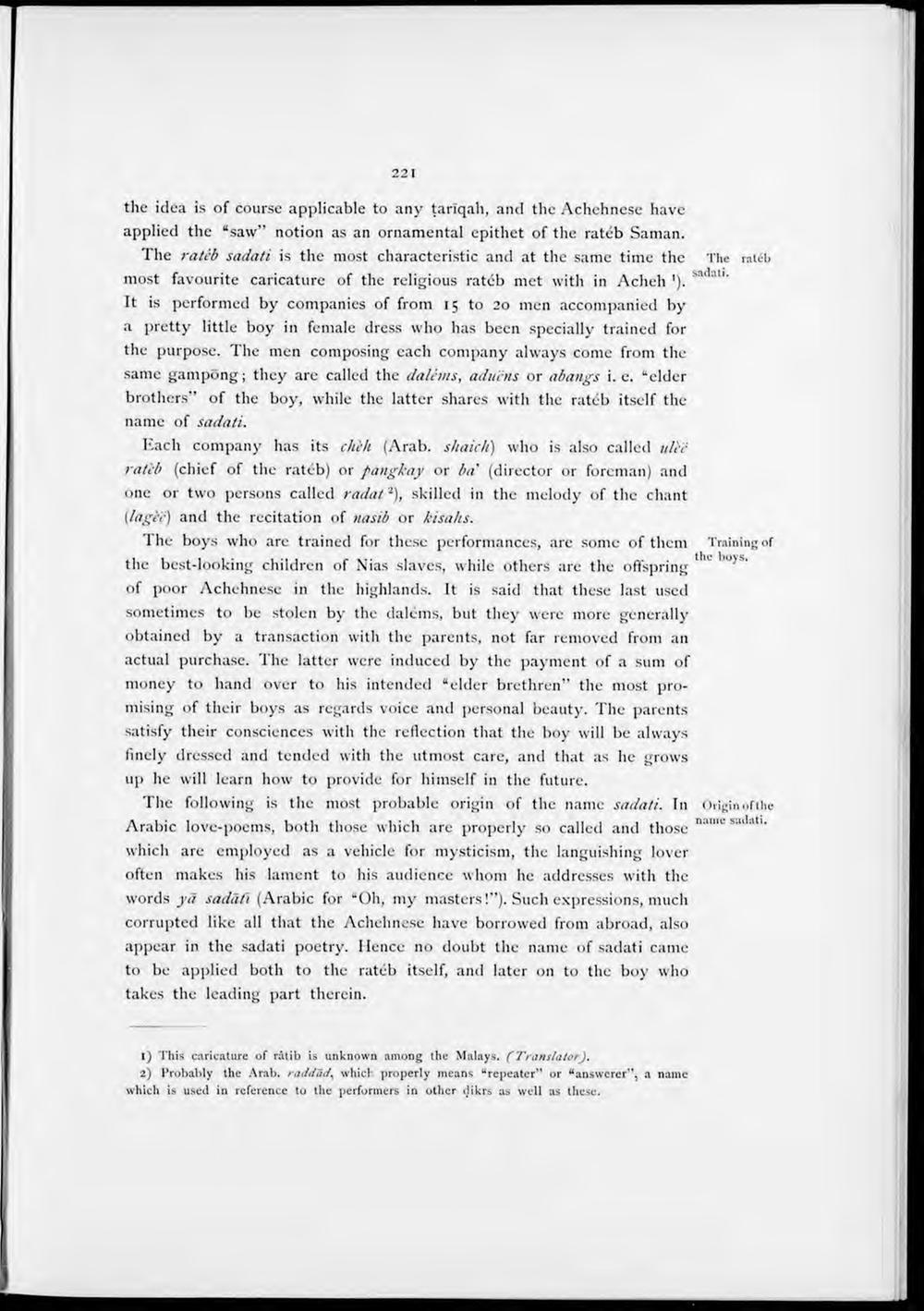 the idea is of course applicable to any tarlqah, and the Achchnese have applied the "saw" notion as an ornamental epithet of the ratéb Saman.

The ratéb sadati is the most characteristic and at the same time the The ratéb most favourite caricature of the religious ratéb met with in Acheh '). sru,at1It is performed by companies of from 15 to 20 men accompanied by a pretty little boy in female dress who has been specially trained for the purpose. The men composing each company alvvays come from the same gampöng; they are called the dalévis, ad mus or a bangs i. e. "elder brothers" of the boy, while the latter shares with the ratéb itself the name of sadati.

Each company has its chch (Arab. shaich) who is also called ulè'ê ratib (chief of the ratéb) or pangkay or ba' (director or forcman) and one or two persons called radat skilied in the melody of the chant {lagec) and the recitation of nasib or kisahs.

The boys who are trained for these performances, are some of them Training of the best-looking children of Nias slaves, while others are the offspring "K S' of poor Achehnese in the highlands. It is said that these last used sometimes to be stolen by the daléms, but they were more generally obtained by a transaction with the parents, not far removed from an actual purchase. The latter were induced by the payment of a sum of money to hand over to his intended "elder brethren" the most promising of their boys as regards voice and personal beauty. The parents satisfy their consciences with the reflection that the boy will be always finely dressed and tended with the utmost care, and that as he grows up he will learn how to provide for himself in the future.

The following is the most probable origin of the name sadati. In Originofthe Arabic love-poems, both those which are properly so called and those name 5 ulatl' which are employed as a vehicle for mysticism, the languishing lover often makes his lamcnt to his audience whom he addrcsses with the words ya sadat'i (Arabic for "Oh, my masters!"). Such expressions, much corrupted like all that the Achehnese have borrowed from abroad, also appear in the sadati poetry. Hence no doubt the name of sadati came to be applied both to the ratéb itself, and later on to the boy who takes the leading part therein.

1) This caricature of ratib is unknown among the Malays. (TranslatorJ.

2) Probably the Arab. raddad, which properly means "repeater" or "answerer", a name which is used in reference to the performers in other clikrs as well as these.