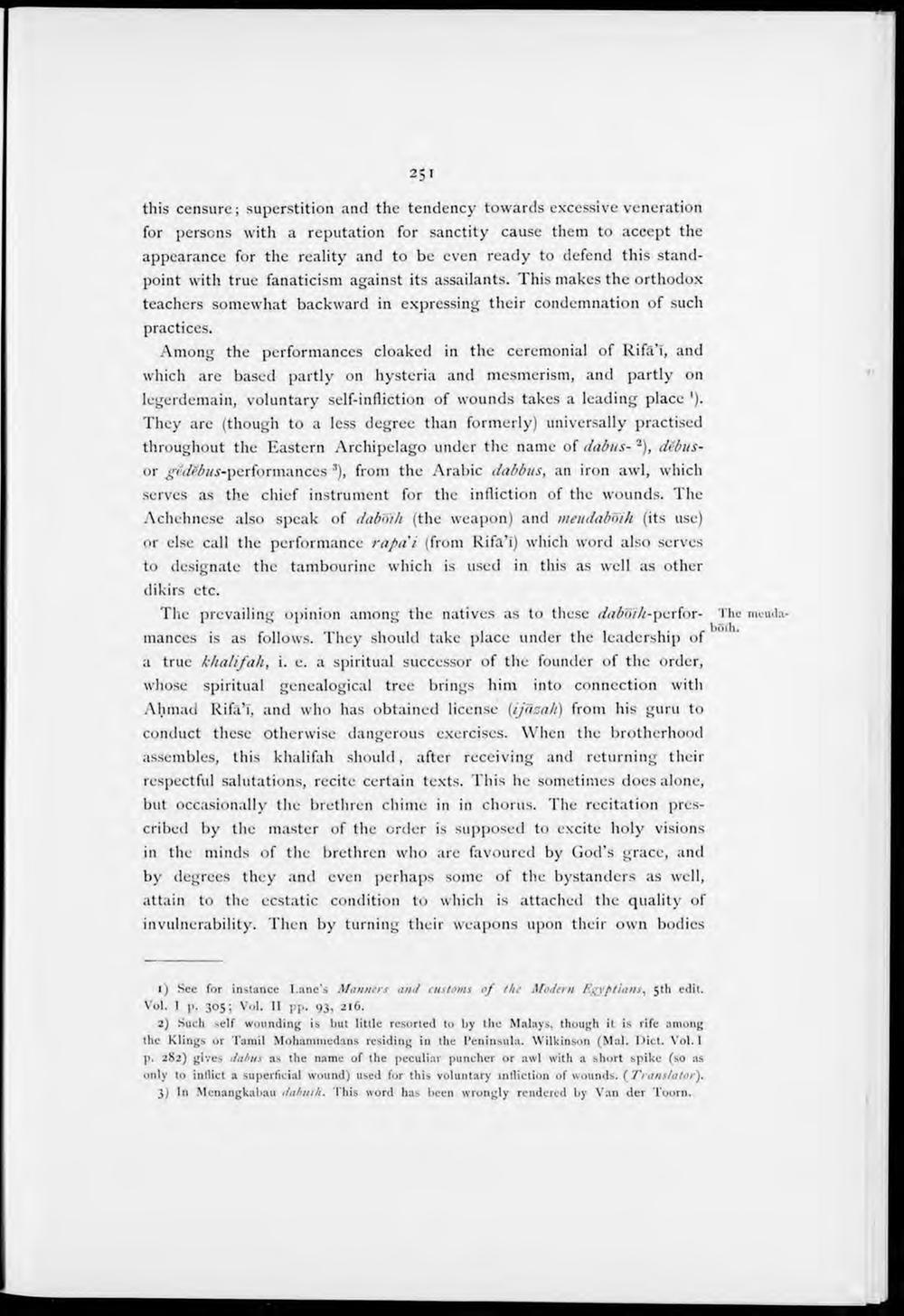 this censure; superstition and the tendency tovvards excessive veneration for persons with a reputation for sanctity cause them to accept the appearance for the reality and to be even ready to defend this standpoint with true fanaticism against its assailants. This makes the orthodox teachers somewhat backward in expressing their condemnation of such practices.

Among the performances cloaked in the ceremonial of Rifa'ï, and which are based partly on hysteria and mesmerism, and partly on legerdemain, voluntary self-infliction of wounds takes a leading place ').

They are (though to a less degree than formerly) universally practised throughout the Eastern Archipelago under the name of dabus- 2), dëbusor ^(We^/Af-performances 3), from the Arabic dabbus, an iron awl, which serves as the chief instrument for the infliction of the wounds. The Achehnese also speak of daböi/i (the weapon) and meudaböih (its use)

or else call the performance rapai (from Rifa'ï) which word also serves to designate the tambourine which is used in this as well as other dikirs etc.

The prevailing opinion among the natives as to these daböih-perfor- The mcudamances is as follows. They should take place under the leadership of a true khalifah, i. e. a spiritual successor of the founder of the order,

whose spiritual genealogical tree brings him into connection with Ahmad Rifa'ï, and who has obtained license (ijasah) from his guru to conduct these otherwise dangerous exercises. When the brotherhood assembles, this khalifah should, after receiving and returning their respectful salutations, recite certain texts. This he sometimes does alone, but occasionally the brethren chime in in chorus. The recitation prescribed by the master of the order is supposed to excite holy visions in the minds of the brethren who are favoured by God's grace, and by degrees they and even perhaps some of the bystanders as well,

attain to the ecstatic condition to which is attached the quality of invulnerability. Then by turning their weapons upon their own bodies

2) Such self wounding is but little resorted to by the Malays, though it is rife among the Klings or Tamil Mohammedans residing in the Peninsula. Wilkinson (Mal. Dict. Vol. I p. 282) gives dabus as the name of the peculiar puncher or awl with a short spike (so as only to intlict a superficial wound) used for this voluntary infliction of wounds. ( Translator).

3) In Menangkabau dabuih. This word has been wrongly rendered by Van der Toorn.