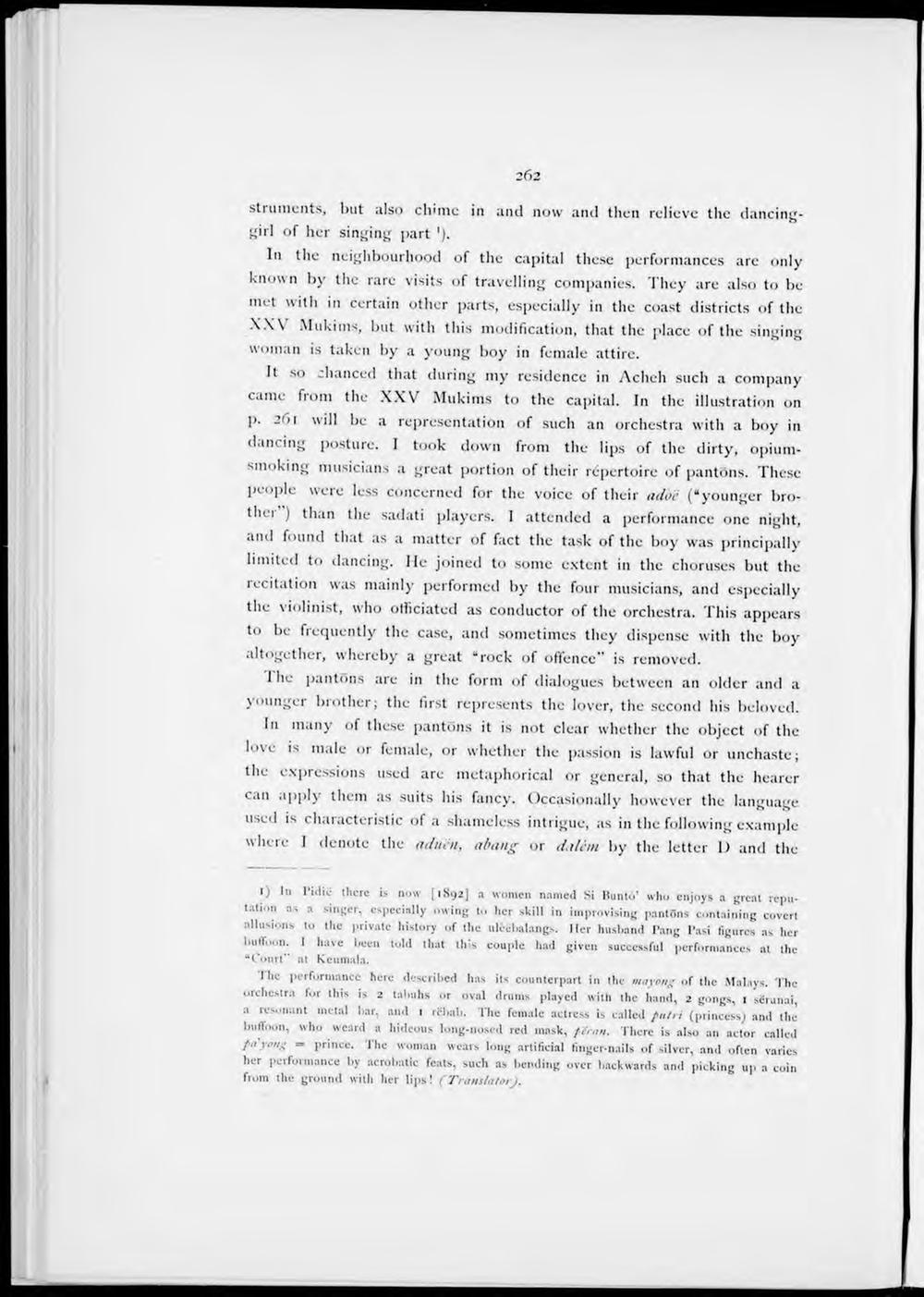 strunients, hut also chime in and now and then relieve the dancinggirl of her singing part ').

In the neighbourhood of the capital these performances are only know n by the rare visits of travelling companies. They are also to be met with in certain other parts, especially in the coast districts of the XXV Mukims, hut with this modification, that the place of the singing woman is taken by a young boy in female attire.

It so -hanced that during my residence in Acheh sucli a company came from the XXV Mukims to the capital. In the illustration on p. 261 will be a representation of sucli an orchestra with a boy in dancing poslure. I took down from the lips of the dirty, opiumsmoking musicians a great portion of their répertoire of pantons. These people were less concerned for the voice of their adoc ("younger brothei ) than the sadati players. I attended a performance one night, and found that as a matter of fact the task of the boy was principally limited to dancing. He joined to sorae extent in the choruses but the recitation was mainly performed by the four musicians, and especially the violinist, who otficiated as conductor of the orchestra. This appears to be frequently the case, and sometimes they dispense with the boy altogether, whereby a great "rock of ofifence" is removed.

I he pantons are in the form of dialogues between an okler and a younger brother; tlie first represents the lover, the second liis beloved.

In inany of these pantons it is not clear whether the object of the Iove is male or female, or whether the passion is lawful or unchaste; the expressions used are metaphorical or general, so that the hearcr can apply them as suits his fancy. Occasionally however the language used is characteristic of a shameless intrigue, as in the following example where I denote the aducn, abang or d.ilém by the letter 1) and the

1) In Pidic thcre is now [1892] a women named Si Buntó' who enjoys a great reputation as a singer, especially owing to lier ski!! in improvising pantons containing covert allusions to the private history of the ulèëbalangs. lier husband Pang I'asi figures as her buffoon. I have been told that this couple had given successful performances at the "Court" at Kcumala.

lhc performance here described has its counterpart in the mayong of the Malays. The orchestra for this is 2 tabuhs or oval drums played with the hand, 2 gongs, 1 sërunai, a resonant metal bar, and 1 rëbab. The female actress is called putri (prineess) and the buffoon, who weard a hideous long-nosed red mask, p'cran. Thcre is also an actor called feïyong = princc. The woman wears long artificial finger nails of silver, and often varics her performance by acrobatie feats, such as bending over backwards and picking up a coin from the ground with her lips! (Translator).