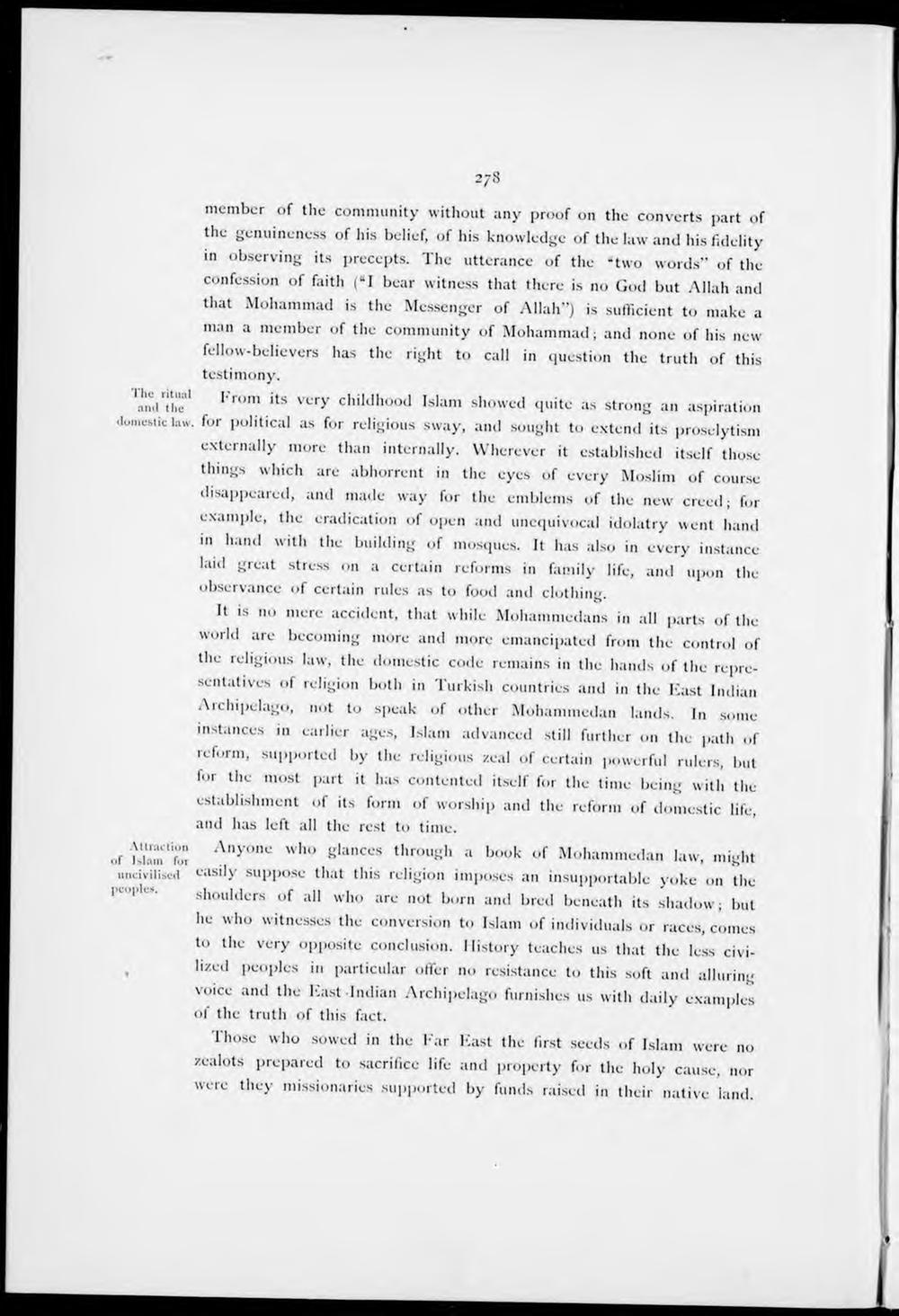 membcr of the community without any proof on the converts part of the genuineness of his belief, of his knowledge of the law and his fidelity in observing its precepts. The utterance of the "two vvords" of the confession of faith ("I bear witness that there is no God but Allah and that Mohammad is the Messenger of Allah") is sufficiënt to make a man a member of the community of Mohammad; and none of his new fellow-believers lias the right to call in question the truth of this testimony.

domestic law. for political as for religious sway, and sought to extend its proselytism externally more than internally. Wherever it established itself those things which are abhorrent in the eyes of every Moslim of course disappeared, and made way for the emblems of the new creed; for example, the eradication of open and unequivocal idolatry went hand 111 hand witli the building of mosques. It has also in every instance laid great stress on a certain reforms in family life, and upon the observance of certain rules as to food and clothing.

It is no niere accident, that wliile Mohammedans in all parts of the world are becoming more and more emancipated from the control of the religious law, the domestic code remains in the hands of the representaties of religion botli 111 Turkish countries and in the East Indian Archipelago, not to speak of other Mohammedan lands. In some instances in earlier ages, Islam advanced still further 011 the pat li of reform, supported by the religious zeal of certain powerful rulers, but for the most part it has contented itself for the time being with the establishment of its form of worship and the reform of domestic life, and has left all the rest to time.

Of isk'r'ror Any°ne who glances throuSh a book "f Mohammedan law, might uncivilised easily suppose that tliis religion imposes an insupportable yoke on the

shoulders of all who are not born and bred beneath its shadow; but he who witnesses the conversion to Islam of individuals or races, comes to the very opposite conclusion. Ilistory teaches us that the less civilized peoples in particular offer no resistance to this soft and alluring voice and the East Indian Archipelago furnishes us with daily examples of the truth of this fact.

Those who sowed in the Ear East the first seeds of Islam were no zealots prepared to sacrifice life and property for the lioly cause, nor were tliey missionaries supported by fuiids raised in their native land.