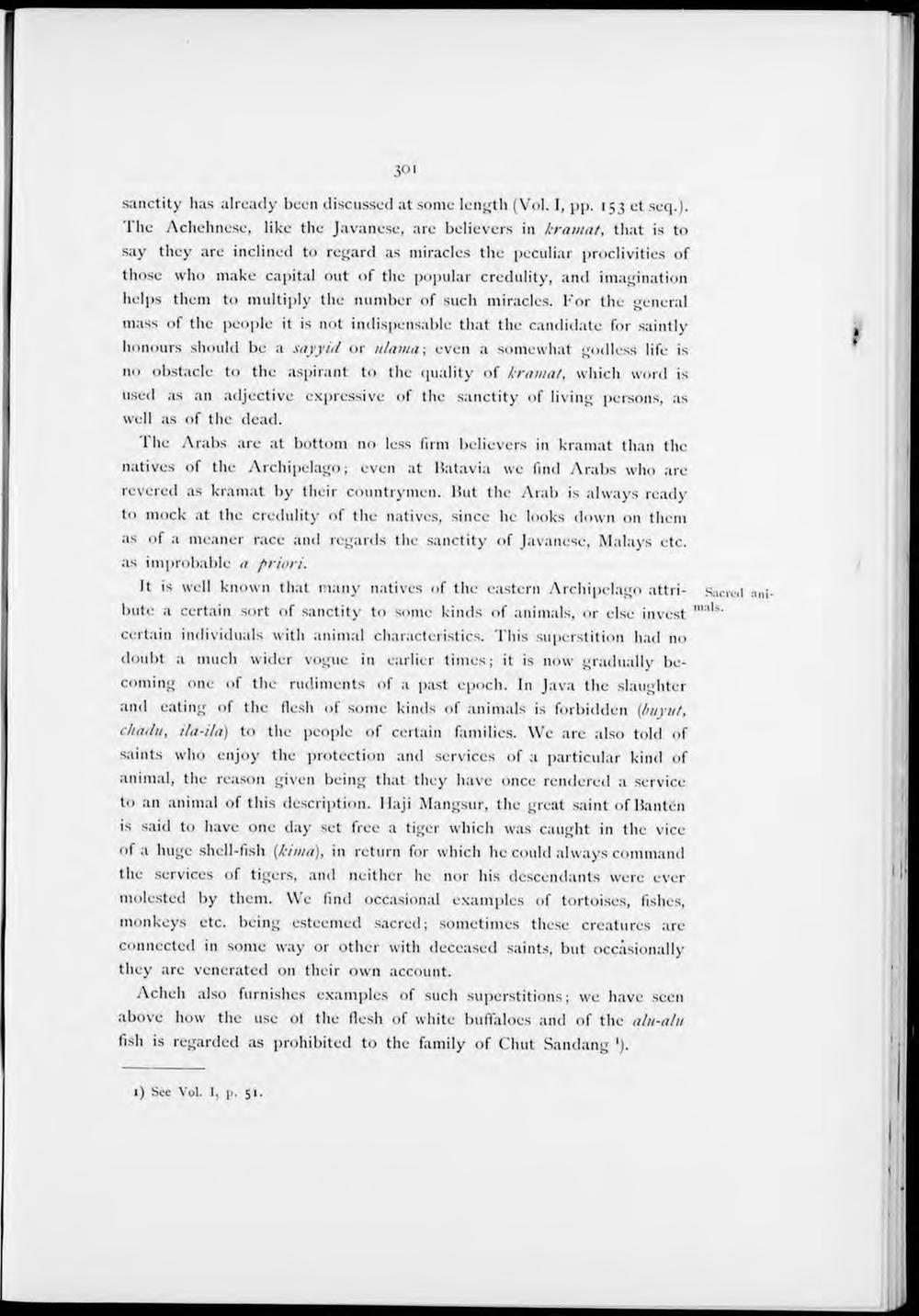 sanctity has already been discussed at some length (Vol. I, pp. 153 ct seq.). The Achehnese, likc the Javanesc, are believers i 11 krauwt, that is to say they are inclined to regard as miracles the peculiar proclivities of those who make capital out of the popular credulity, and imagination helps them to multiply the number of sucli miracles. For the general mass of the people it is not indispensable that the candidate for saintly honours should be a sayyid or iilama-, even a somewhat godless life is 110 obstacle to the aspirant to the quality of kramat, which word is used as an adjective expressive of the sanctity of living persons, as well as of the dead.

The Arabs are at bottom no less firm believers in kramat than the natives of the Archipelago; even at Batavia we find Arabs who are revered as kramat by their countrymen. Hut the Arab is always ready to mock at the credulity of the natives, since he looks down 011 them as of a meaner race and regards the sanctity of Javanesc, Malays etc. as improbable a priori.

Jt is well known that many natives of the eastern Archipelago attri- Socrcd ani bute a certain sort of sanctity to some kinds of animals, or else invest ma certain individuals with animal characteristics. This superstition had 110 doubt a much wider vogue in earlier times; it is now gradually becoming one of the rudiments of a past epoch. In Java the slaughter and eating of the flesh of some kinds of animals is forbidden (buyut,

chadu, i/a-ila) to the people of certain families. We are also told of saints who enjoy the protection and services of a particular kind of animal, the reason given being that they have once rendered a service to an animal of this description. Haji Mangsur, the great saint ofBanten is said to have one day set free a tiger which was caught in the vice of a huge shell-fish [kiina), in return for which he could always command the services of tigers, and neither he nor his descendants were ever molcstcd by them. We find occasional examples of tortoises, fishes,

monkeys etc. being esteemed sacred; sometimes these creatures are connected in some way or other with deceased saints, but occasionally they are venerated on their own account.

Achch also furnishes examples of sucli superstitions; wc have seen above how the use ot the flesh of white buffaloes and of the alu-alu fish is regarded as prohibited to the family of Chut Sandang ').