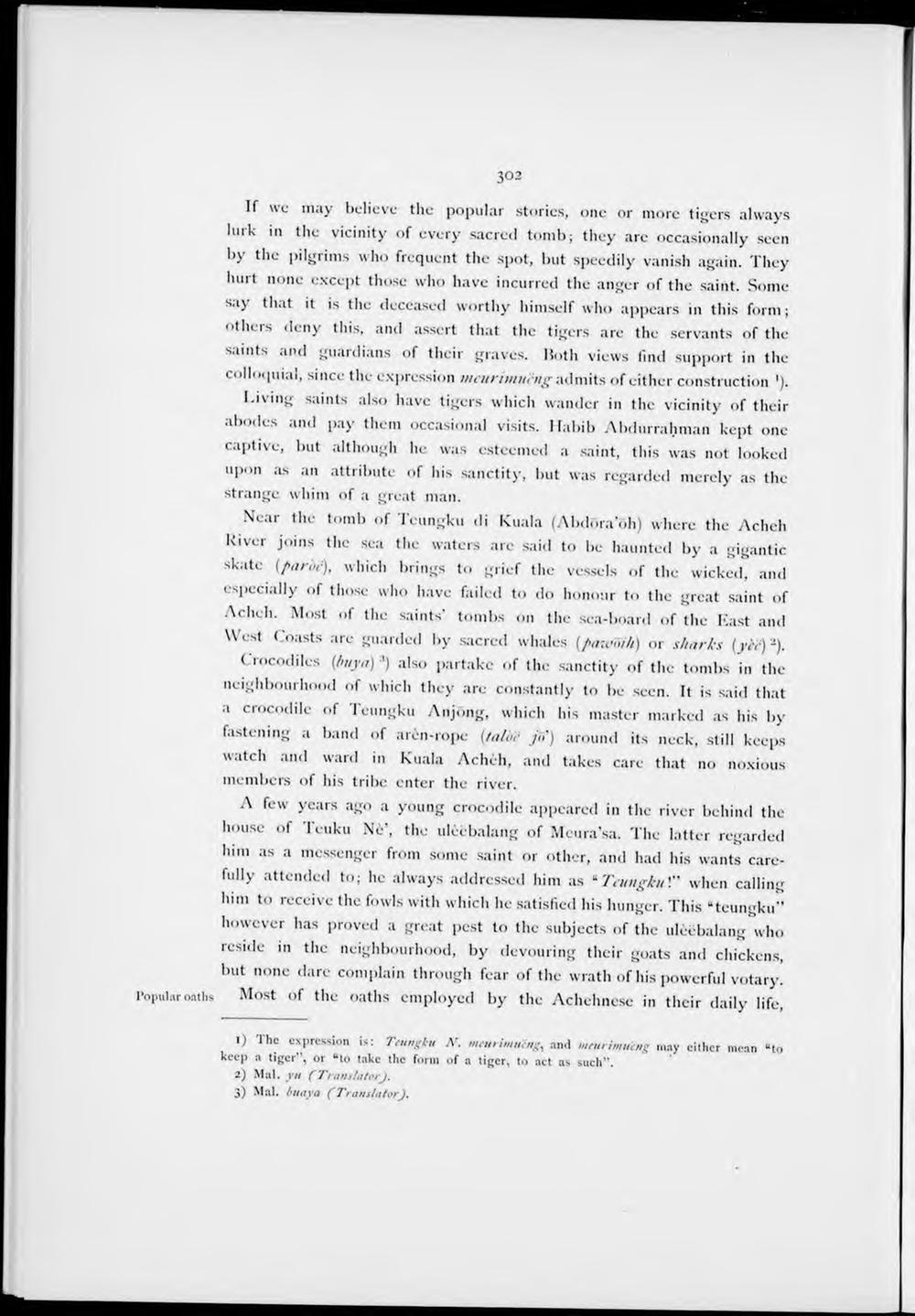 li wc may believe the popular stories, onc or more tigers always lurk 111 the vicinity of every sacred tomb; they are occasionally seen by the pilgrims who frequent the spot, but speedily vanish again. They hurt none except those who have incurred the anger of the saint. Some s.i) tli.it it is the deceased worthy himself who appears in this form; others deny this, and assert that the tigers are the servants of the saints and guardians of their graves. Hoth views find support in the colloquia), si nee the expression mcuritnucng admits of either construction ').

Living saints also have tigers which wander in the vicinity of their abodes and pay them occasional visits. Habib Abdurrahman kept onc captive, but although he was estccmcd a saint, this was not looked uP°n as 'in attribute of his sanctity, but was regarded nierely as the strange whim of a great man.

Ne ar the tomb of Teungku di Kuala (Abdöra'öh) where the Acheh River joins the sea the waters are said to be hauntcd by a gigantic skate {parbe), which brings to grief the vcssels of the wickcd, and especially of those who have failcd to do honour to the great saint of Acheh. Most of the saints' tombs 011 the sca-board of the East and West Coasts are guarded by sacred whales (pawoih) or sharks (yèc)2).

Crocodilcs (buya)also partake of the sanctity of the tombs in the neighbourhood of which they are constantly to be seen. It is said that a crocodilc of Teungku Anjöng, which his master marked as his by fastemng a band of arèn-rope (lalor jö') around its neck, still keeps watch and ward in Kuala Achèh, and takes care that 110 noxious members of his tribe enter the river.

A few years ago a young crocodilc appeared in the river behind the house of I euku Nè', the ulèëbalang of Meura'sa. The Jatter regarded him as a messenger from some saint or other, and had his wants carefully attended to; he always addressed him as " Teungku!" when calling him to receive the fowls with which he satisfied his Inniger. This "teungku" however lias proved a great pest to the subjects of the ulèëbalang who reside in the neighbourhood, by devouring their goats and chickens, but none dare complain through fear of the wrath of his powerful votary.

Most of the oaths employed by the Achehnese in their daily life,