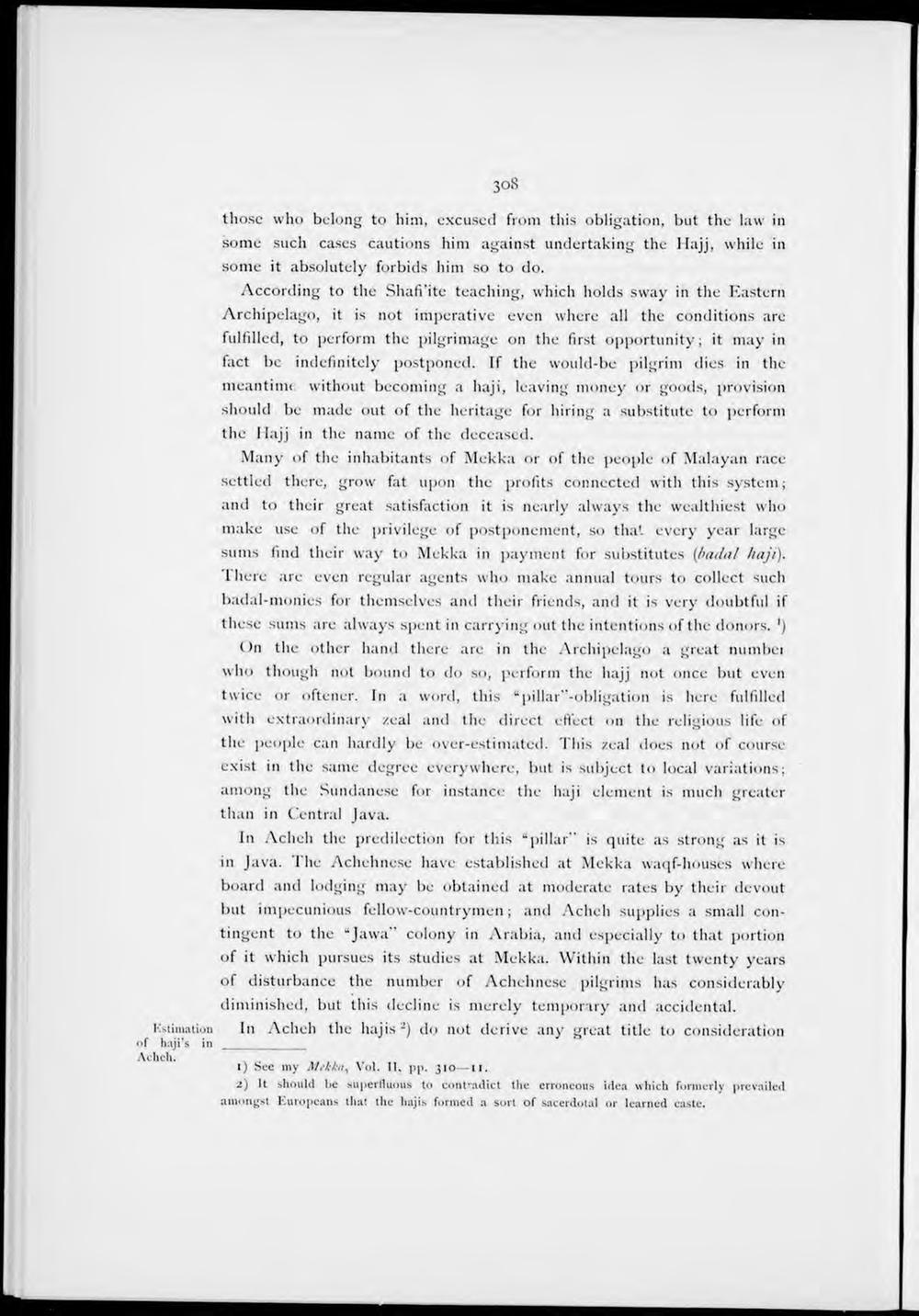 those who belong to him, excused from this obligation, but the law in some such cases cautions him against undertaking the Hajj, while in some it absolutely forbids him so to do.

According to the Shafi'ite teaching, which holds sway in the Eastern Archipelago, it is not imperative even where all the conditions are fulfilled, to perform the pilgrimage on the fïrst opportunity; it may in fact be indefinitely postponed. If the would-be pilgrim dies in the meantimr. without becoming a haji, leaving money or goods, provision should be made out of the heritage for hiring a substitute to perform the Hajj in the name of the deceased.

Many of the inhabitants of Mekka or of the people of Malayan race settled there, grow fat upon the profits connected with this system; and to their great satisfaction it is nearly always the wealthiest who make use of the privilege of postponement, so that every year large sums find their way to Mekka in payment for substitutes (badal haji). There are even regular agents who make annual tours to collcct such badal-monies for themselves and their friends, and it is very doubtful if these sums are always spent in carrying out the intentions of the donors. ')

On the other hand there are in the Archipelago a great numbei who though not bound to do so, perform the hajj not once but even twice or oftener. In a word, this "pillar"-obligation is here fulfilled with extraordinary zeal and the direct effect on the religious life of the people can hardly be over-estimated. This zeal does not of course exist in the same degree every where, but is subject to local variations; among the Sundanese for instance the haji element is much greater than in Central Java.

In Acheh the predilection for this "pillar" is quite as strong as it is in Java. 1 he Achehnese have established at Mekka waqf-houses where board and lodging may be obtained at moderate rates by their devout but impecunious fellow-countrymen; and Acheh supplies a small contingent to the "Jawa" colony in Arabia, and especially to that portion of it which pursues its studies at Mekka. Within the last twenty years of disturbance the number of Achehnese pilgrims has considerably diminished, but this decline is merely temporary and accidental.

2) It should be superfluous to cont'adict tlie erroneous idea which fornierly prevailed amongst Europeans that the hajis formed a soit of sacerdotal or learned easte.