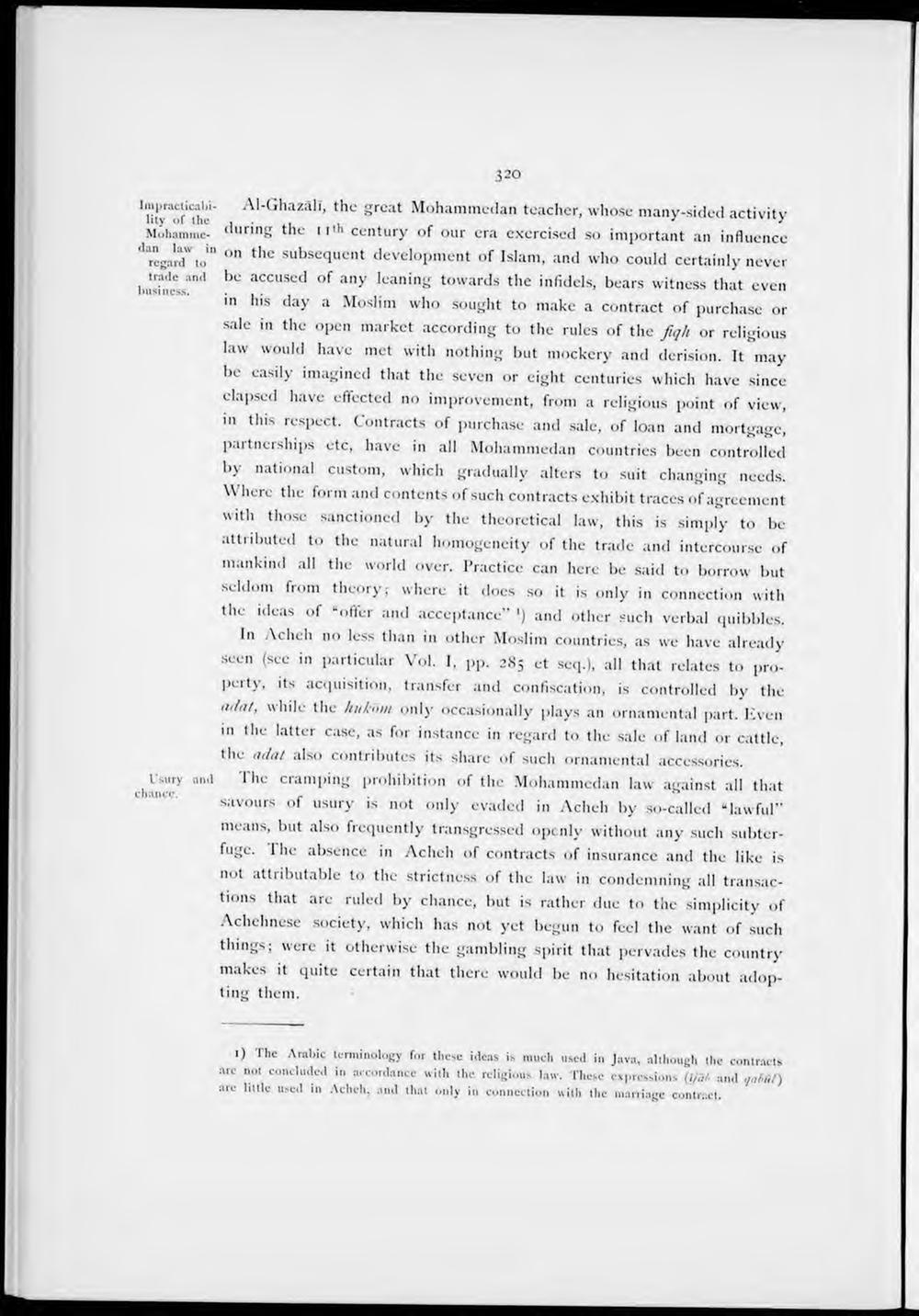 Muhamme- during the ii'h century of our era exercised so important an influence regard" to'" °n t'ie subsequent development of Islam, and vvho could certainly never l,usTneessand bü accused of an-v lcai»ng towards the infidels, bears witness that even in his day a Moslim who sought to make a contract of purchase or sale in the open market according to the rules of the fiqh or religious law would have met vvith nothing Luit mockery and derision. It may be easily imagined that the seven or eight centuries which have since elapsed have effected no improvement, from a religious point of view, in this respect. Contracts of purchase and sale, of loan and mortgage, partnerships etc, have in all Mohammedan countries been controlled by national custom, which gradually alters to suit changing needs. Where the form and contents of such contracts exhibit traces ofagreement vvith those sanctioned by the theoretical law, this is simply to be attributed to the natural homogeneity of the trade and intercourse of mankind all the world over. Practice can here be said to borrow but seldom from theory; where it does so it is only in connection with the ideas of "offer and acceptance" ') and otlier such verbal quibbles.

In Acheh no less than in otlier Moslim countries, as we have already se en (see in particular Vol. I, pp. 285 et seq.), all that relates to property, its acquisition, transfer and confiscation, is controlled by the adat, while the hu kom only occasionally plays an ornamental part. Even 111 the latter case, as for instance in regard to the sale of land or cattle, the adat also contributes its share of such ornamental accessories.

savours of usury is not only evaded in Acheh by so-called "lawful" means, but also frequently transgressed openly without any such subterfuge. Ihe absence in Acheh of contracts of insurance and the like is not attiibutable to the strictness of the law in condemning ;ill transactions that are ruled by chance, but is rather due to the simplicity of Achehnese society, which has not yet begun to feel the want of such things; were it otherwise the gambling spirit that pervades the country makes it quite certain that tliere would be no hesitation about adopting them.

1) Ihe Arabic tcrminology for these ideas is mucli used in Java, although the contracts are not concluded in a.cordance with the religious law. These expressions {tja/. and ,/,;/<«/) are little used in Acheh, and that only in connection with the marriage contract.