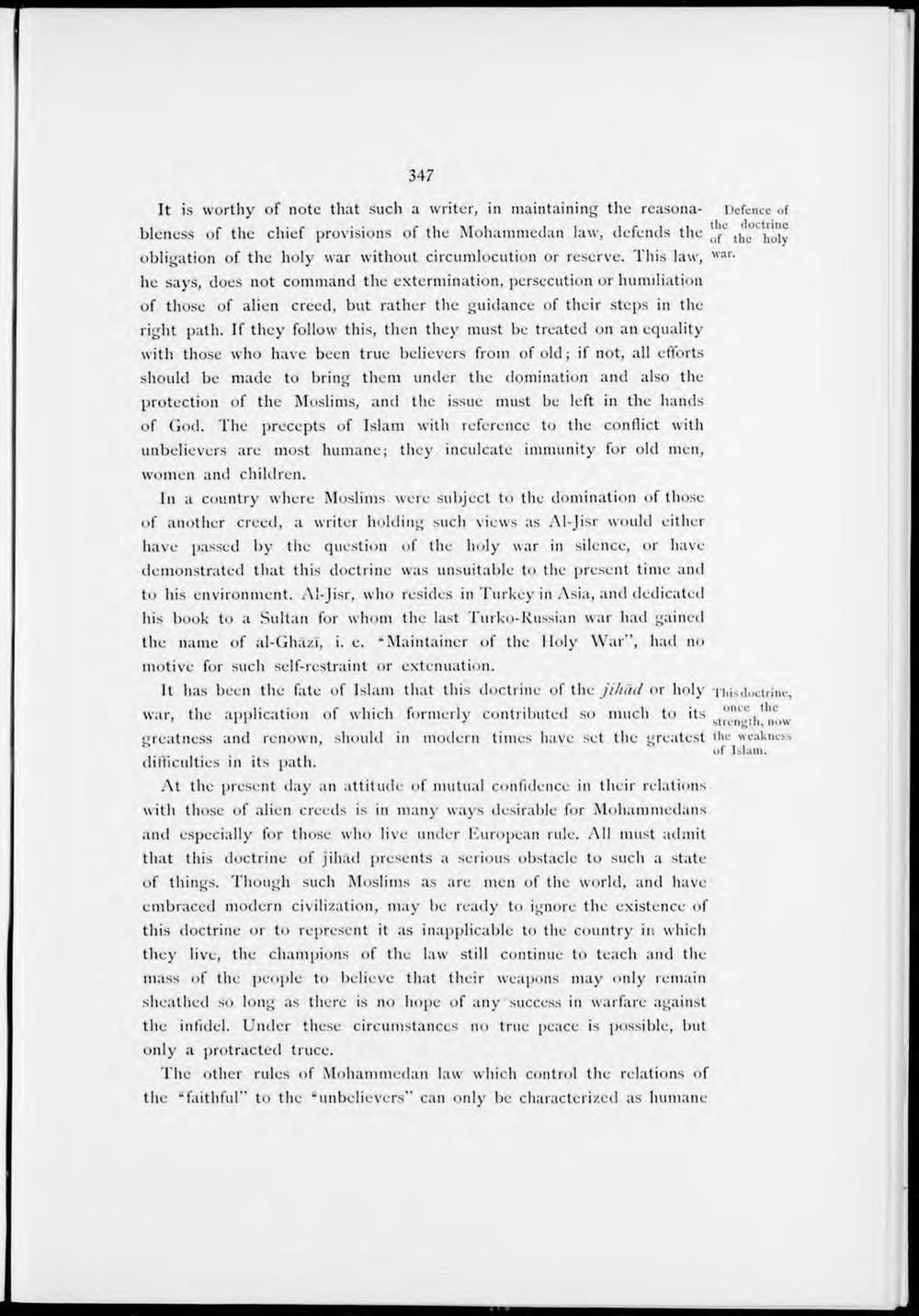 It is worthy of notc that such a writer, in maintaining the rcasona- Defence of bleness of the chief provisions of the Mohammedan law, defends the ^ th^e holy obligation of the holy war without circumlocution or reserve. This law, warhe says, does not command the extermination, persecution or humiliation of those of alien creed, but rather the guidance of their steps in the right path. If they follow this, then they must be treated on an equality with those who have been true believers from of old; if not, all efforts should be made to bring them under the domination and also the protection of the Moslims, and the issue must be left in the hands of God. The precepts of Islam with reference to the conflict with unbelievers are most humane; they inculcate immunity for old men,

In a country where Moslims were subject to the domination of those of another creed, a writer holding such views as Al-Jisr would either have passed by the question of the holy war in silence, or have demonstrated that this doctrine was unsuitable to the present time and to bis environment. Al-Jisr, who resides in Turkey in Asia, and dedicated his book to a Sultan for whom the last Turko-Russian war had gained the name of al-Ghazï, i. e. "Maintainer of the lloly War", had no motive for such self-restraint or extenuation.

It lias been the fate of Islam that this doctrine of the ji/tad or holy This doctrine, war, the application of which formerly contributed so niucli to its st""nc^|1l',^,w trreatness and renown, should in modern times have set the ereatest the wcaknuss

difficulties in its path.

At the present day an attitude of mutual confidence in their relations with those of alien creeds is in many ways desirable for Mohammedans and especially for those who live under European rule. All must admit that this doctrine of jihad presents a serious obstacle to such a state of tliings. Though such Moslims as are men of the world, and have embraced modern civilization, may be ready to ignore the existence of this doctrine or to represent it as inapplicable to the country in which they live, the champions of the law still continue to teacli and the mass of the people to believe that their weapons may only remain sheathed so long as there is 110 hope of any success in warfare against the infidel. Under these circumstances 110 true peace is possible, but only a protracted truce.