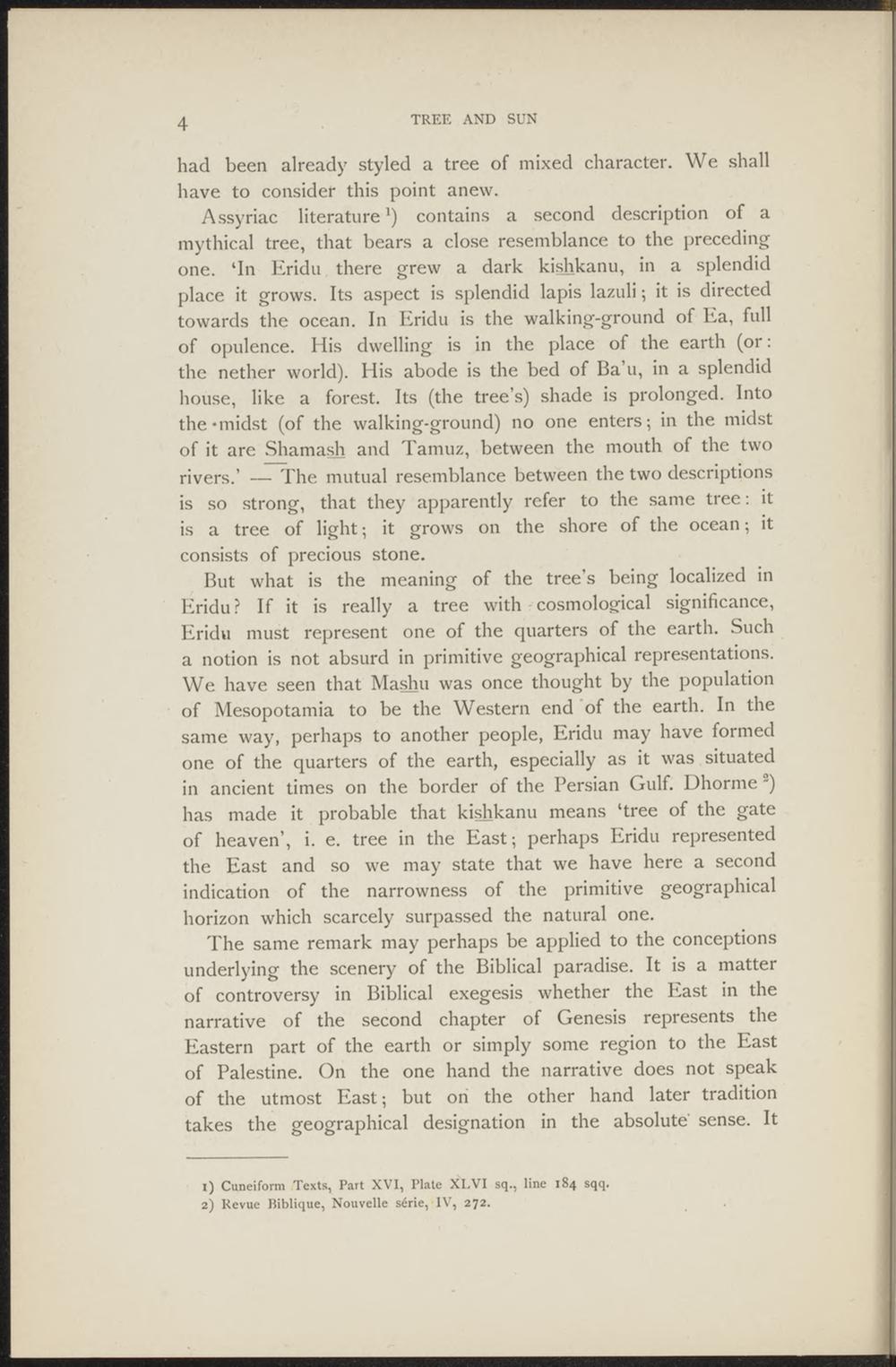 had been already styled a tree of mixed character. We shall have to consider this point anew.

Assyriac literature *) contains a second description of a mythical tree, that bears a close resemblance to the preceding one. 'In Eridu there grew a dark kishkanu, in a splendid place it grows. Its aspect is splendid lapis lazuli; it is directed towards the ocean. In Eridu is the walking-ground of Ea, full of opulence. His dwelling is in the place of the earth (or: the nether world). His abode is the bed of Ba'u, in a splendid house, like a forest. Its (the tree's) shade is prolonged. Into the*midst (of the walking-ground) no one enters; in the midst of it are Shamash and Tamuz, between the mouth of the two rivers.' — The mutual resemblance between the two descriptions is so strong, that they apparently refer to the same tree: it is a tree of light; it grows on the shore of the ocean; it consists of precious stone.

But what is the meaning of the tree's being localized in Eridu? If it is really a tree with cosmologfical significance, Eridu must represent one of the quarters of the earth. Such a notion is not absurd in primitive geographical representations. We have seen that Mashu was once thought by the population of Mesopotamia to be the Western end of the earth. In the same way, perhaps to another people, Eridu may have formed one of the quarters of the earth, especially as it was situated in ancient times on the border of the Persian Gulf. Dhorme ~) has made it probable that kishkanu means 'tree of the gate of heaven', i. e. tree in the East; perhaps Eridu represented the East and so we may state that we have here a second indication of the narrowness of the primitive geographical horizon which scarcely surpassed the natural one.

The same remark may perhaps be applied to the conceptions underlying the scenery of the Biblical paradise. It is a matter of controversy in Biblical exegesis whether the East in the narrative of the second chapter of Genesis represents the Eastern part of the earth or simply some region to the East of Palestine. On the one hand the narrative does not speak of the utmost East; but on the other hand later tradition takes the geographical designation in the absolute sense. It