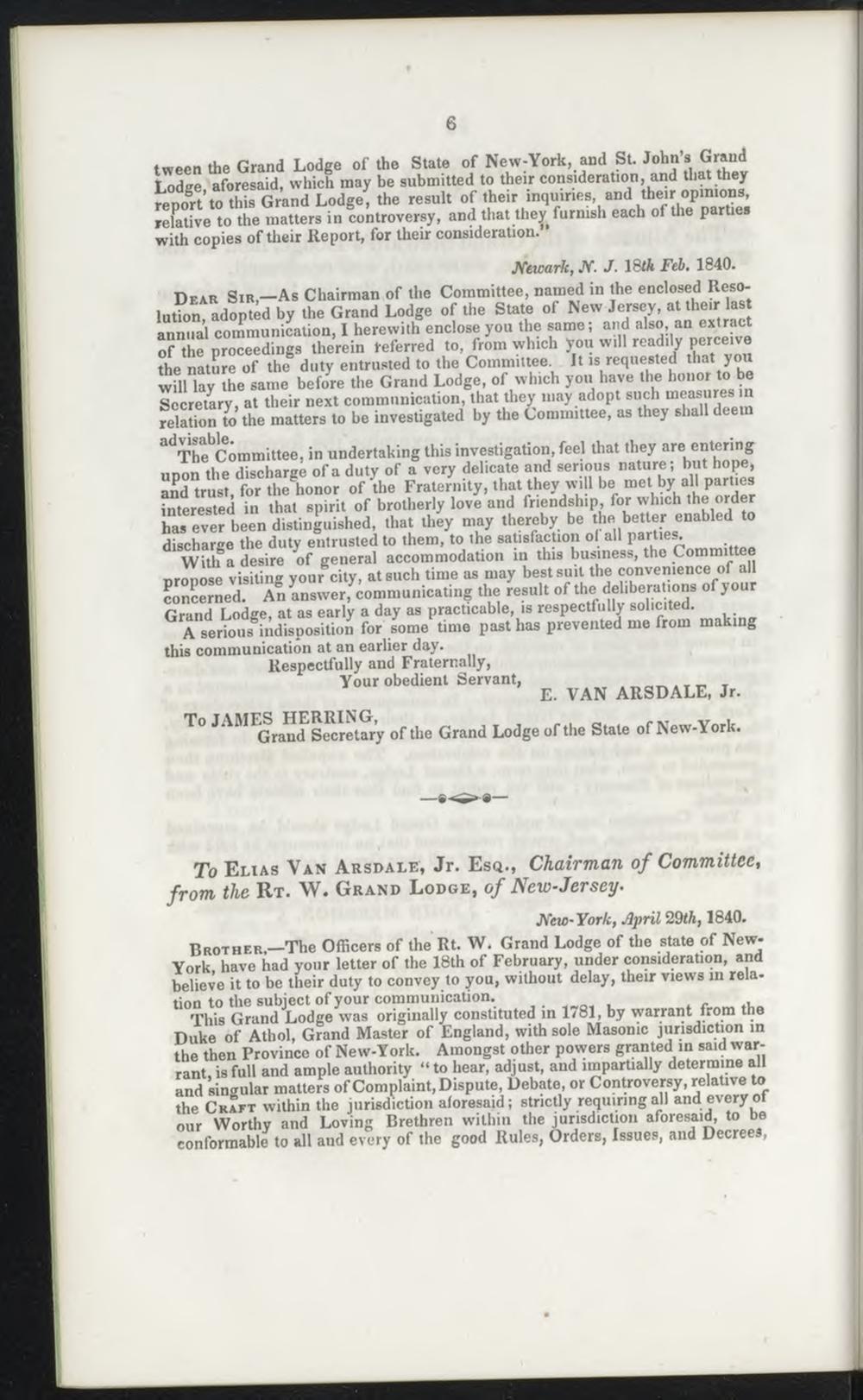 tween the Grand Lodge of the State of New-York, and St. John s Grand Lod^e aforesaid, which may be submitted to their consideration, and tliat they renort'to this Grand Lodge, the result of their inquiries, and their opinions, relative to the matters in controversy, and that they furmsh each of the parties with copies of their Report, for their consideration.

Dear Sib,—As Chairman of the Committee, named in the enclosed Resolution, adoptéd by the Grand Lodge of the State of New Jersey, at their las annual communication, I herewith enclose you the same; and also, an extract of the proceedings therein feferred to, from which y°u wJi readily Petce1''® the nature of the duty entrusted to the Committee. Jt is requested that you will lay the same before the Grand Lodge, of which you have the honor to be Sccretary, at their next communication, that they may adopt such measuresm relation to the matters to be investigated by the Committee, as they shall deem

adThebcimmittee, in undertaking this investigation, feel that they are entering unon the discharge ofa duty of a very delicate and serious nature, but hope, and trust, for the honor of the Fratemity, that they wijl be metbyallpartieg interested in that spirit of brotherly love and fnendship, for which the order has ever been distinguished, that they may thereby be the better enabled to discharge the duty entrusted to them, to the satisfaction ol all parties^

Withadesire of general accommodation in this business, the Committee nronose visiting your city, at such time as may best suil the convenience of all concerned. An ansvver, communicating the result of the deliberations of your Grand Lodge, at as early a day as practicable, is respectfully sohcited.

A serious indisposition for some time past has prevented me from making this communication at an earlier day.

Brother —The Officers of the Rt. W. Grand Lodge of the state of NewYork have had your letter of the 18th of February, under consideration, and believe it to be their duty to convey to you, without delay, their views in relation to the subject of your communication.

This Grand Lodge was originally constituted in 1781, by warrant from the Duke of Athol, Grand Master of England, with sole Masonic jurisdiction in the then Provinco of New-York. Amongst other powers granted1 in said warrant is full and ample authority " to liear, adjust, and impartially determine all and sinsular matters ofComplaint,Dispute, Uebate, or Controversy, relative to the Craft within the jurisdiction aforesaid; strictly requirmgall and everyoi our Worthv and Loving Brethren within the jurisdiction aforesaid, to be conformable to all and every of the good Rules, Orders, Issues, and Decrees,