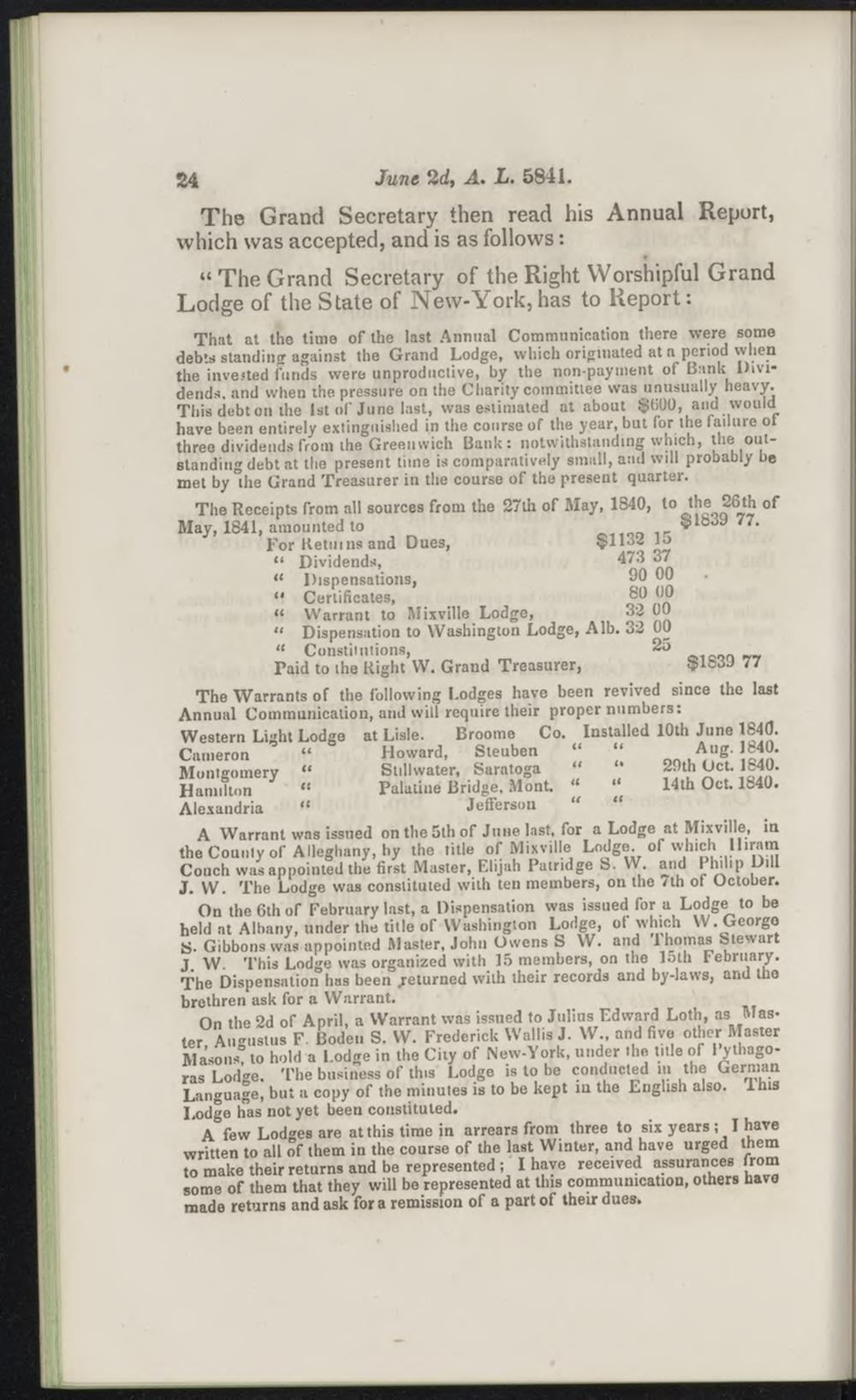 The Grand Secretary then read his Annual Report, which was accepted, and is as follows:

" The Grand Secretary of the Right Worshipful Grand Lodge of the State of New-York, has to Report:

That at the time of the last Annual Communication there vvere some deb's standinir against the Grand Lodge, which origiuated at a period wlien the inveHed funds were unproductive, by the nonpayment of Bank Dividend*. and when the pressure on the Charity commitlee was unusually heavy. Tliis debton the Ist of June last, was estimated at about $ti00, and would have been entirely extingnished in the course of the year, but for lhe fauure ot three dividends from the Greenvvich Bank: notwithstanding which, the outstanding debt at the present tiine is comparatively small, and will probably be met by the Grand Treasurer in the course of the present quarter.

The Warrants of the following l.odges have been revived since the last Annual Communication, and will require their proper numbers:

A Warrant was issued on the 5th of June last, for a Lodge at Mixville, in the County of Alleghany, hy the title of Mixville Lodge. of vvhjch Hiram Couch wasappointedthe first Master, Elijah Paindge b. W. and Phihp pul J. W. The Lodge was conslituted wilh ten meinbers, on the 7th ol Uctober.

On the 6th of February last, a llispensation was issued for a Lodge to be held at Albany, under the title of Washington Lodge, ol which W.Georgo

J. W. This Lodge was organized with 15 members, on the 15lh rebruary. The Dispensation has been /eturned wilh their records and by-laws, and the brethren ask for a Warrant.

On the 2d of April, a Warrant was issued to Julius Edward Loth, as Maaier Au-ustus F. Boden S. W. Frederick Wallis J. W., and five otlier Master Ma,0ii° to hold a Lodge in the City of New-York, under lhe tule of I ythagoras Lodge. The business of this Lodge is to be conducted m the German Language, but a copy of the minutes is to be kept in the English also. lhis Lodge has not yet been constituted.

A few Lod«es are at this time in arrears from three to six years ; I have written to all of them in the course of the last Winter, and have urged them to make their returns and be represented ; I have received assurances from some of them that they will be represented at this communication, others bave made returns and ask for a remission of a part of their dues.