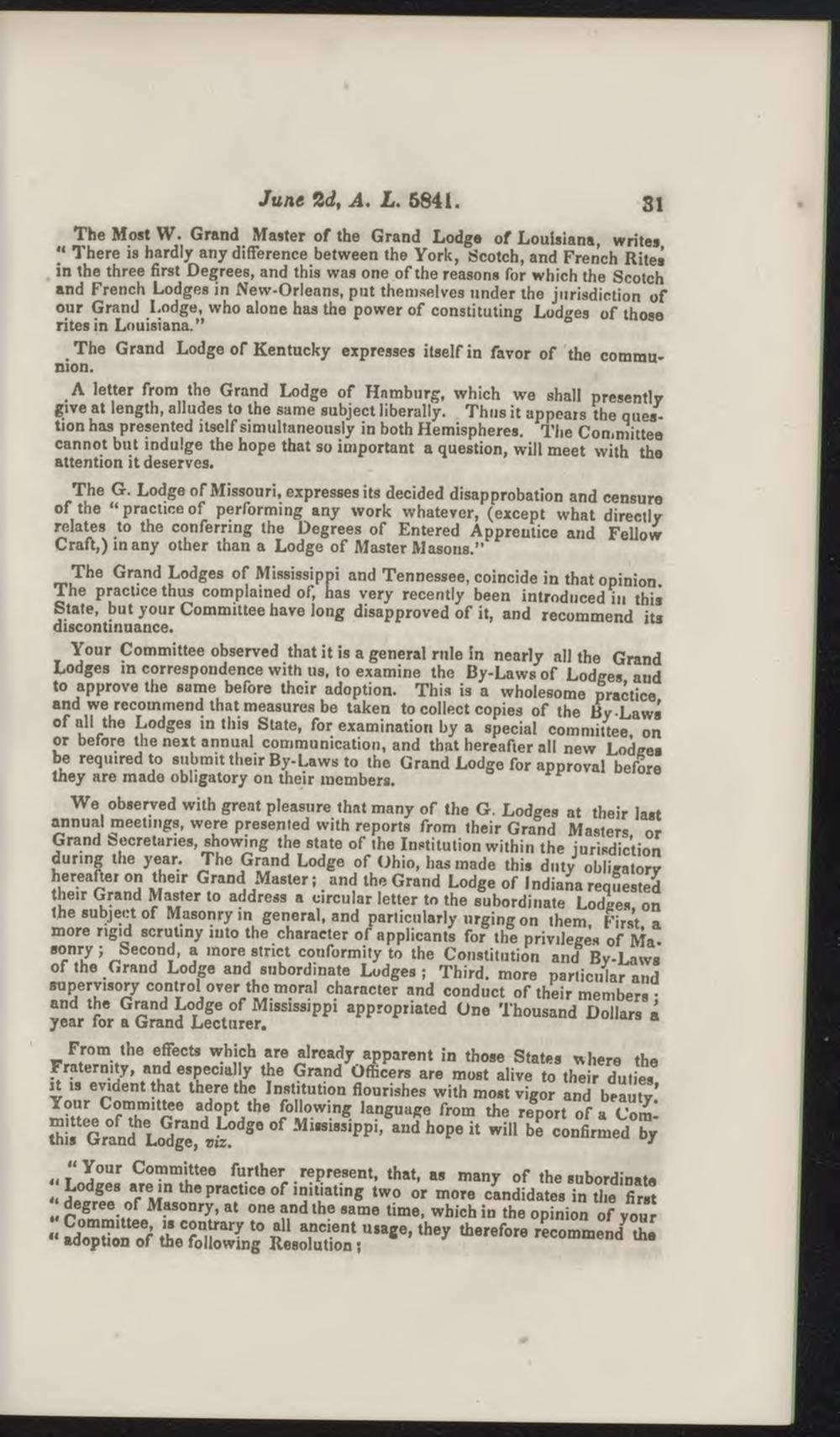 The Most W. Grand Master of the Grand Lodge of Loulsiana, writes

There is hardly any difference between the York, Scotch, and Fren'ch Rites in the three first Degrees, and this was one of the reasons for which the Scotch and French Lodges in New-Orleans, put themselves under the jurisdiction of our Grand I;odge, who alone has the power of constituting Lodges of tho«e ritesin Louisiana."

The Grand Lodge or Kentucky expresses itself in favor of the commumon.

A Ietter from the Grand Lodge of Hamburg, which we shall presentlv give at length, alludes to the same subject liberally. Thiis it appeais the question has presented itself simultaneously in both Hemispheres. The Committee cannot but indulge the hope that so important a question, will meet with the attention it deserves.

The G. Lodge of Missouri, expresses its decided disapprobation and censure of the "practiceof performing any vvork whatever, (except what directly relates to the conferring the Degrees of Entered Appreutice and Fellow Craft,) in any other than a Lodge of Master Masons."

The Grand Lodges of Mississippi and Tennessee, coincide in that opinion The practice thus complained of, has very recently been introduced in thii State, but your Committee have long disapproved of it, and recommend its discontinuance.

Your Committee observed that it is a general rille in nearly ali the Grand Lodges in correspondence with us, to examine the By-Laws of Lodges and to approve the same before thcir adoption. This is a wholesome practice and we recommend that measures be taken to collect copies of the By-Laws of "11 the Lodges in this State, for examination by a special committee on or before the next annual communication, and that hereafier all new Lodffes be required to submit their By-Laws to the Grand Lodge for approval before they are made obligatory on their inembers.

We observed with great pleasure that many of the G. Lodges at their last annual meetings, were presented with reports from their Grand Masters or Grand becretaries, showing the state of the Institution within the jurisdiction dur.ng the year. The Grand Lodge of Ohio, lms made thi, duty obligatory hereafter on their Grand Master; and the Grand Lodge of Indiana requested their Grand Master to address a circular letter to the subordinate Lodaes on the subject of Masonry in general, and particularly urging on them First a more ngid scrutiny into the character of applicants for the privileges of Ma. '°PV 5 „Sec°nf ® more slrict conformity to the Constitution and By-Laws of the Grand Lodge and subord.nate Ludges ; Third. more particiilar and snperv'sorycontrol over the mora! character and conduct of their members; and the Grand Lodge of Mississippi appropriated One Thousand Dollars a year tor a Grand JLecturer.

From the effects which are already apparent in those States where the Fraternity, and especially the Grand Officers are moet alive to their duties U is evident that there the Institution flourishes with most vigor and beauty'

( ''Your Committee further represent, that, es many of the subordinate

Vm" Practlco of tw° or more candidates in the first

degree of Masonry, at one and the same time, which in the opinion of your