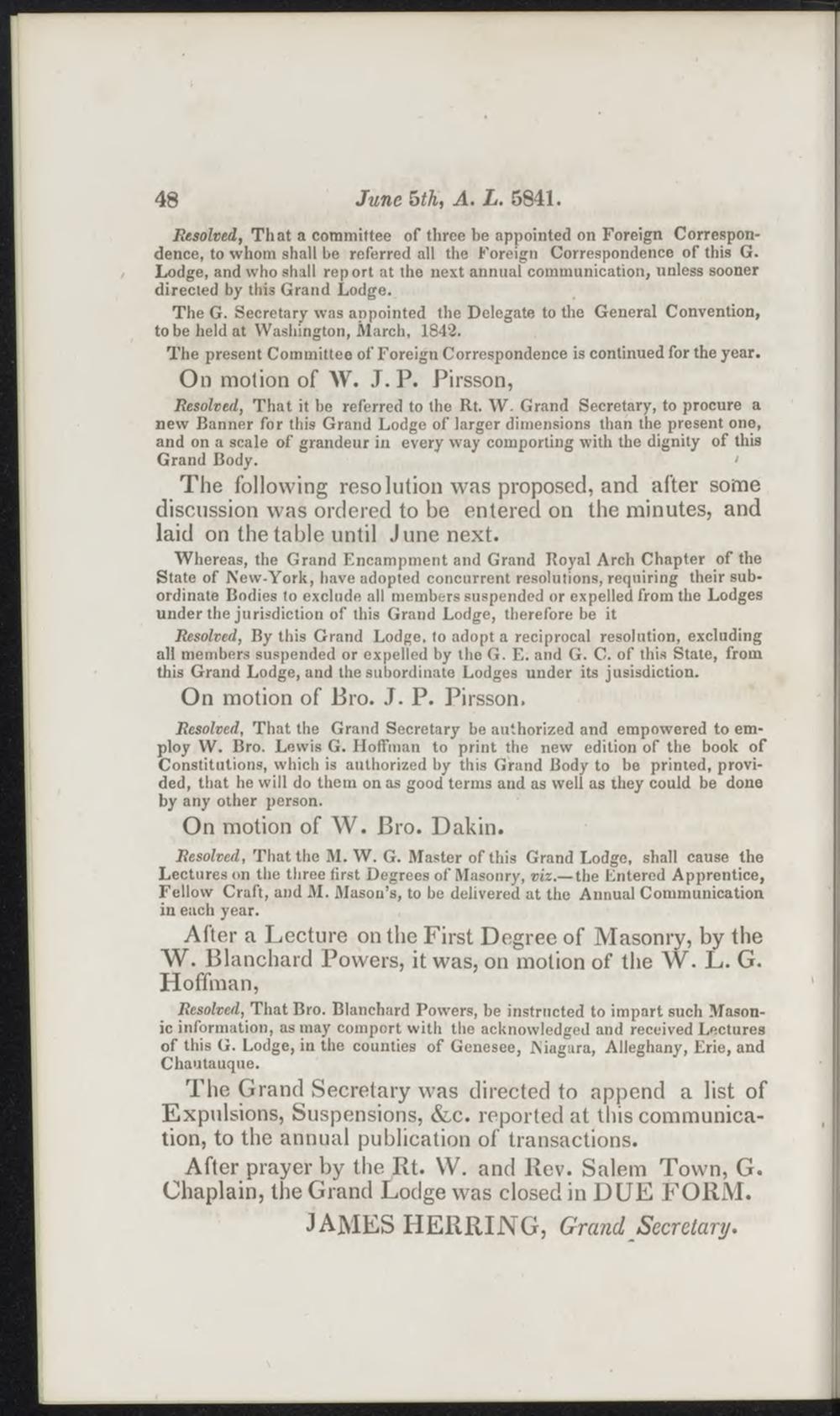 The G. Secretary was appointed the Delegate to the General Convention, tobe held at Washington, March, 1842.

The present Committee of Foreign Correspondence is continued for the year.

Resolved, That it be referred to the Rt. W. Grand Secretary, to procure a new Banner for this Grand Lodge of larger dimensions than the present one, and on a scale of grandeur in every way comporting with the dignity of this Grand Body. >

The following resolution was proposed, and after so'me discussion was ordered to be entered on the minutes, and laid on the table until June next.

Whereas, the Grand Encampment and Grand Royal Arch Chapter of the State of New-York, have adopted concurrent resolutions, requiring their subordinate Bodies to exclude all members suspended or expelled from the Lodges under the jurisdiction of this Grand Lodge, therefore be it

Resolved, By this Grand Lodge, to adopt a reciprocal resolution, excluding all members suspended or expelled by the G. E. and G. C. of this State, from this Grand Lodge, and the subordinate Lodges under its jusisdiction.

Resolved, That the Grand Secretary be authorized and empowered to employ W. Bro. Levvis G. Hoffman to print the new edition of the book of Constitutions, which is authorized by this Grand Body to be printed, provided, that he will do them on as good terms and as well as they could be done by any other person.

On motion of W. Bro. Dakin.

Resolved, That the M. W. G. Master of this Grand Lodge, shall cause the Lectures on the three first Degrees of Masonry, viz.—the Entered Apprentice, Fellow Craft, and M. Mason's, to be delivered at the Annual Communication in each year.

After a Lecture on the First Degree of Masonry, by the W. Blanchard Powers, it was, on motion of the W. L. G. Hoffman,

Resolved, That Bro. Blanchard Powers, be instructed to impart such Masonic information, as may comport with the acknowledged and received Lectures of this G. Lodge, in the counties of Genesee, JNiagara, Alleghany, Erie, and Chautauque.

The Grand Secretary was directed to append a list of Expnlsions, Suspensions, &c. reported at this communication, to the annual publication of transactions.

After prayer by the Rt. VV. and Rev. Salem Town, G. Chaplain, the Grand Lodge was closed in DUE FORM.