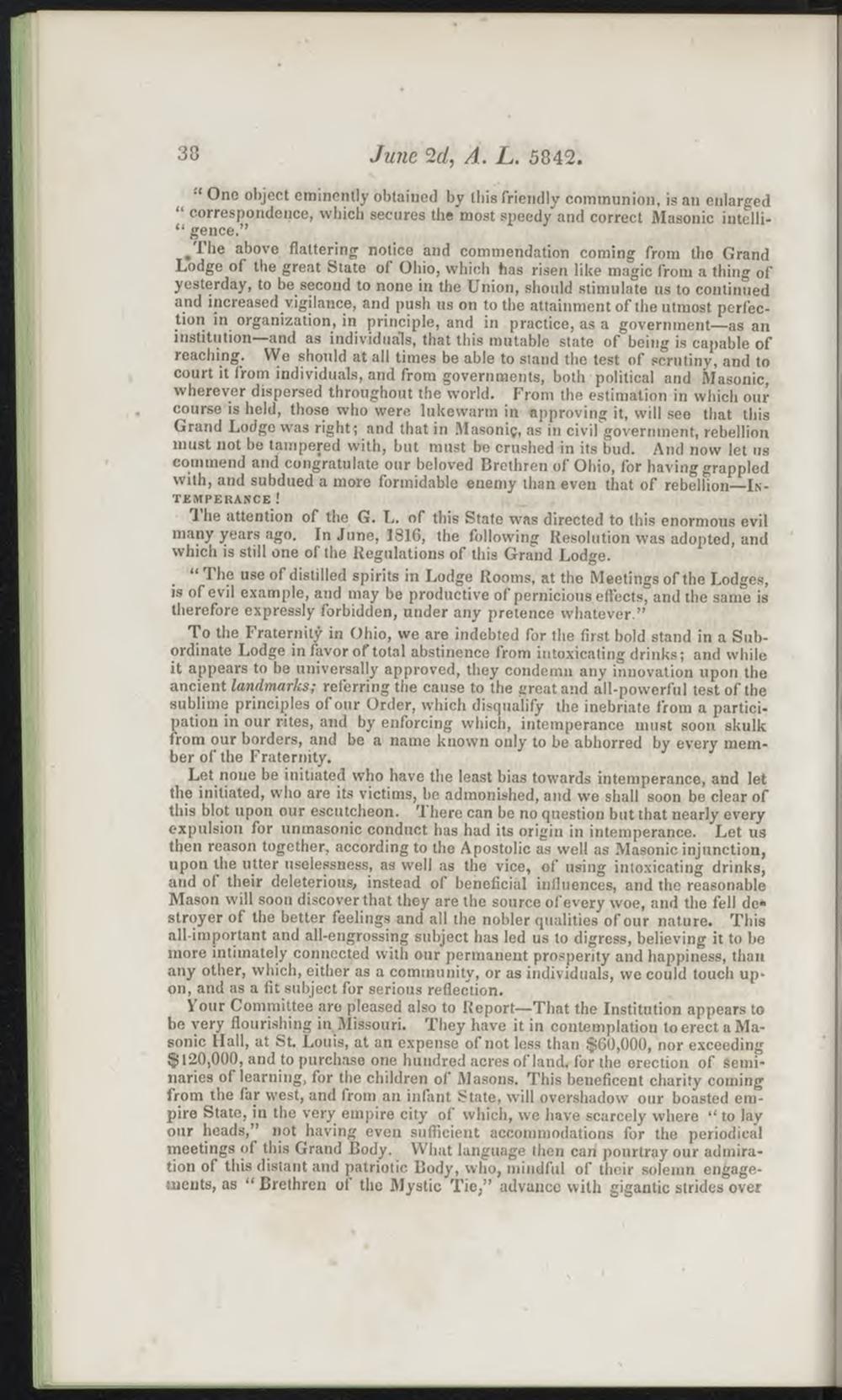 •' One object eminently obtained by Ibis friendly cnmmunion, is an enlarged " correspondence, which secures the most speedy'and correct Masonic intelli11 ge nee."

.The above flattering notice and commendation coming from the Grand Lodge of the great State of Ohio, which has risen like magie from a thing of yesterday, to be second to none in the Union, should stimulate us to continued and increased vigilance, and push us on to the attainment of the utmost perfection in organization, in principle, and in practice, as a government—as an institution—and as individuals, that this mutable state of being is capable of reaching. We should at all times be able to stand the lest of scrutiny, and to court it from individuals, and from governments, both political and Masonic, wherever dispersed throughout the world. From the estimation in which our course is held, those who were lukevvarm in approving it, will see that this Grand Lodge was right ; and that in Masonic, as in civil government, rebellion must not be tampered with, but must be crushed in its bud. And now let us commend and congratulate our beloved Brethren of Ohio, for having grappled with, and subdued a more formidable enemy than even that of rebellion—INTEMPERANCE !

1 he attention of the G. L. of this State was directed to this enormous evil many years ago. In JTune, Ï816, the following Resolution was adopted, and which is still one of the Regulations of this Grand Lodge.

" The use of distilled spirits in Lodge Rooms, at the Meetings of the Lodges, is of evil example, and may be productive of pernicious effects, and the same is therefore expressly forbidden, under any pretence whatever."

To the Fratemity in Ohio, we are indebted for the first bold stand in a Subordinate Lodge infavorof total abstinence from intoxicating drinks; and while it appears to be universally approved, they condemn any innovation upon the ancient landmarks; referring the cause to the great and all-powerful test of the sublime principles of our Order, w;hich disqualify the inebriate from a participation in our rites, and by enforcing which, intemperance must soon skulk from our borders, and be a name known only to be abhorred by every member of the Fraternity.

Let none be initiated who have the least bias towards intemperance, and let the initiated, who are its victims, l>e admonished, and we shall soon be clear of this blot upon our escutcheon. rl here can be no question but that nearly every expulsion for unmasonic conduct has had its origin in intemperance. Let us then reason together, according to the Apostolic as well as Masonic injunction, upon the utter uselessness, as well as the vice, of using intoxicating drinks, and of their deleterious, instead of beneficial influences, and the reasonable Mason will soon discover that they are the source of every woe, and the feil de stroyer of the better feelings and all the nobler qualities of our nat ure. This all-important and all-engrossing subject has led us to digress, believing it to be more intimately connccted with our permanent prosperity and happiness, than any other, which, either as a comrnunity, or as individuals, we could touch up» on, and as a fit subject for serious reflection.

Your Committee are pleased also to Report—That the Institution appears to be very flourishing in Missouri. They have it in contemplation to erect a Masonic Hall, at St. Louis, at an expense of not less than $60,000, nor exceeding $120,000, and to purchase one hundred acres of land, for the erection of Seminaries of learning, for the children of Masons. This beneficent charity coming from the far west, and from an infant State, will overshadow our boasted empire State, in the very empire city of which, we have scarcely where 11 to lay our heads," not having even sufficiënt accommodations for the periodical meetings of this Grand Body. What language then cari pourtray our admiration of this distant and patriotic Body, who, mindful of their solemn engageaients, as " Brethren oi the Mystic Tie," advancc with gigantic strides over