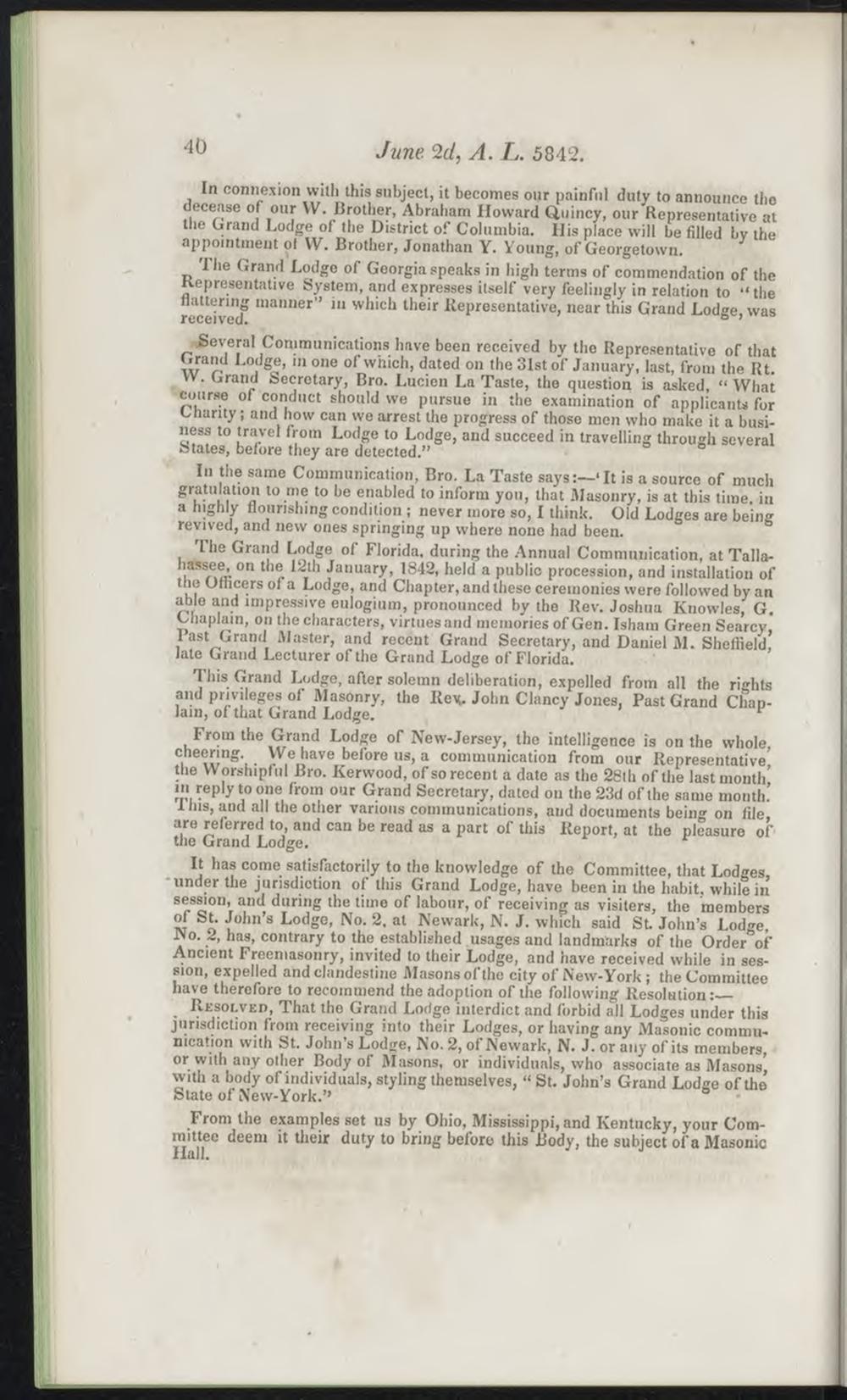 In connexion wilh this subject, it becomes our painful duty to announce tho decease of our VV. Brother, Abraham Howard Quincy, our Representative at ,ran" Lodge of "'0 District of Columbia. His place will be filled bv the appointment ot VV. Brother, Jonathan Y. Young, of Georgetown.

The Grand Lodge of Georgia speaks in high terms of commendation of the Kepresentative System, and expresses ilself very feelingly in relation to "the flattering marnier" m which their Kepresentative, near this Grand Lodge, was

Several Communications have been received by tho Representative of that l^rand Lodge, in one of which, dated 011 the Slstof January, last, from the Rt. VV. Grand Secretary, Bro. Lucien La Taste, the question is asked, " What course of conduct should we pursue in the examination of applicants for Uliurity; and how can we arrest the progress of those men who make it a business to travel from Lodge to Lndge, and succeed in travelling through several States, before they are detected." °

In the same Communication, Bro. La Taste says:—'It is a source of much gratulation to me to be enabled to inform you, that Masonry, is at this time in a hignly flourishing condition; never more so, I tliink. Old Lodges are being revived, and new ones springing up where none had been.

The Grand Lodge of Florida, during the Annual Communication, at Talla°n r * Jjanuary» 1842, held a public procession, and installation of the Umeers ol a Lodge, and Chapter, and these ceremonies vvere foliovved by an able and impressive eulogium, pronounced by the Rev. Joshua Knowles, G. Ohaplain, on the characters, virtuesand memories of Gen. Isham Green Searcy Past Grand Master, and recent Grand Secretary, and Daniël M. Sheffield, late Grand Lecturer of the Grand Lodge of Florida.

This Grand Lodge, after solemn deliberation, expelled from all the rights and privileges of Masonry, the Re\. John Clancy Jones. Past Grand ChanJain, of that Grand Lodge. r

From the Grand Lodge of New-Jersey, the intelligence is on the whole cheering We have before us, a communication from our Representative' the Worshipful Bro. Kerwood, of so recent a date as the 28th of the last month in replyto one from our Grand Secretary, dated on the 23d of the same month! Ihis, and all the other various cominunications, and documents being on file, are referred to, and can be read as a part of this Report, at the pleasure of the Grand Lodge.

It has come satisfactorily to the knowledge of the Committee, that Lodges, under the jurisdiction of this Grand Lodge, have been in the habit. while in session, and during the time of labour, of receiving as visiters, the members of St. John's Lodge, No. 2, at Newark, N. J. which said St. John's Lodge, .No. 2, has, contrary to the established usages and landmarks of the Order oi' Ancient Freeniasonry, invited to their Lodge, and have received while in session, expelled and clandestine Masonsofthe city of New-York; the Committee have therefore to recoinmend the adoption of the following Resolution:—

Resolved, That the Grand Lodge interdict and forbid all Lodges under this jurisdiction from receiving into their Lodges, or having any Masonic communication with St. John s Lodge, No. 2, of JN'ewark, N. J. or any of its members, or with any other Body of Masons, or individuals, who associate as Masons' with a body of individuals, styling thetnselves, " St. John's Grand Lodge of the' State of New-York."

From the examples set us by Ohio, Mississippi, and Kentucky, your Committee deern it their duty to bring before this Body, the subject of a Masonic Hall.