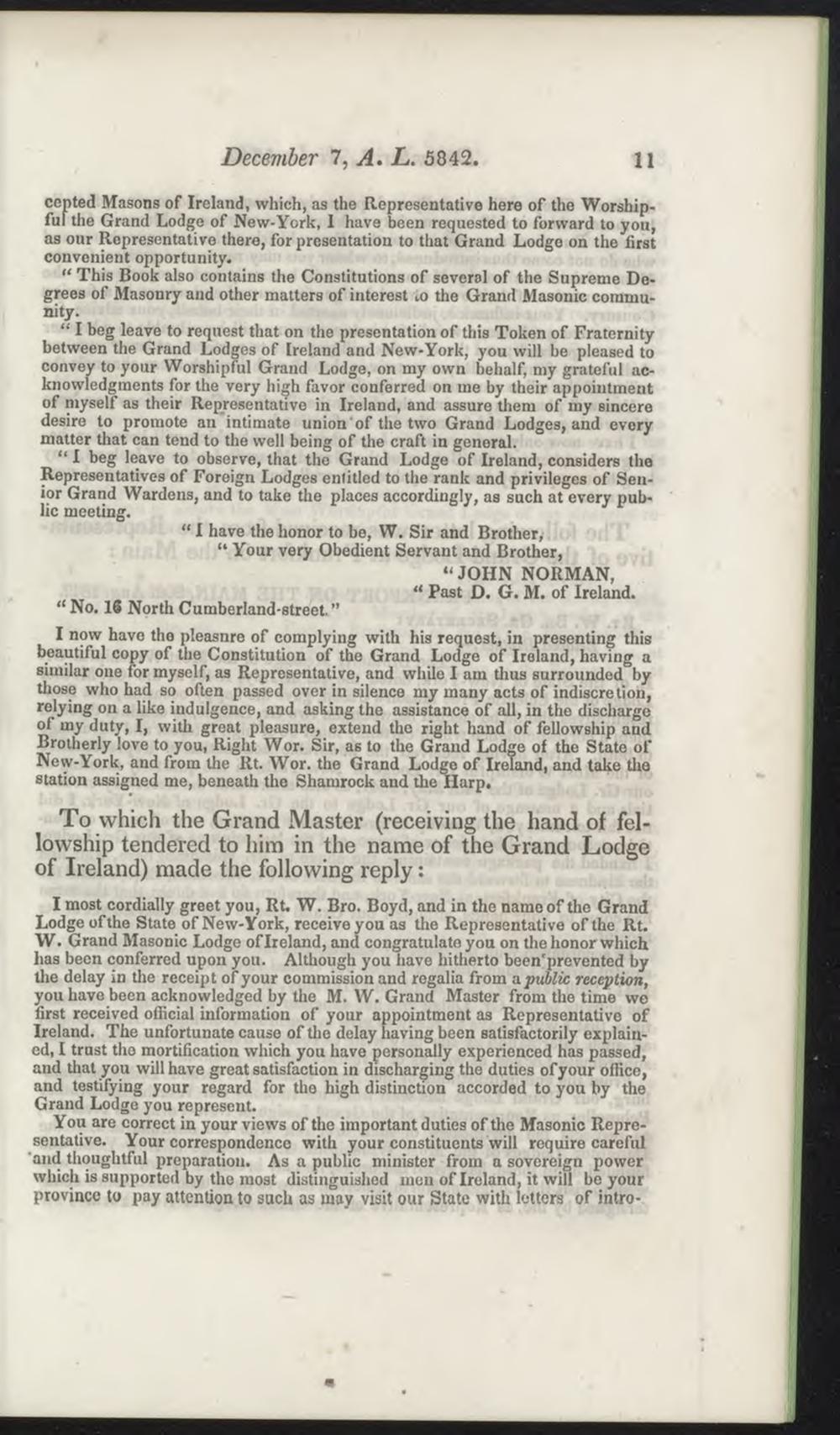 " This Book also contains the Constitutions of several of the Supreme Degrees of Masonry and other matters of interest io the Grand Masonic community.

" I beg leave to request that on the presentation of this Token of Fraternity between the Grand Lodges of Ireland and New-York, you will be pleased to convey to your Worshipïul Grand Lodge, on my own behalf, my grateful acknowledgments for the very high favor conferred on me by their appointment of myself as their Representative in Ireland, and assure them of my sincere desire to proraote an intimate union of the two Grand Lodges, and every matter that can tend to the wel! being of the craft in general.

" I beg leave to observe, that the Grand Lodge of Ireland, considers the Representatives of Foreign Lodges entitled to the rank and privileges of Senior Grand Wardens, and to take the places aecordingly, as such at every public meeting.

" Your very Obedient Servant and Brother,

I now have the pleasnre of complying with his request, in presenting this beautiful copy of the Constitution of the Grand Lodge of Ireland, having a similar one for myself, as Representative, and while I am thus surrounded by those who had so often passed over in silence my uiany acts of indiscrelion, relying on a like indulgence, and asking the assistance of alt, in the discharge of my duty, I, with great pleasure, extern] the right hand of fellowship and Brotherly love to you, Right Wor. Sir, as to the Grand Lodge of the State of New-York, and from the Rt. Wor. the Grand Lodge of Ireland, and take the station assigned me, beneath the Shamrock and the Harp.

To which the Grand Master (receiving the hand of fellowship tendered to him in the name of the Grand Lodge of Ireland) made the following reply:

I most cordially greet you, Rt. W. Bro. Boyd, and in the nameof the Grand Lodge of the State of New-York, receive you as the Representative of the Rt. W. Grand Masonic Lodge of Ireland, and congratulato you on the honor which lias been conferred upon you. Although you have hitherto been'prevented by the delay in the receipt of your commission and regalia from a public reception, you have been acknowledged by the M. W. Grand Master from the time we first received official information of your appointment as Representative of Ireland. The unfortunate cause of the delay having been satisfactorily explaiued, I trast the mortification which you have personaily experienced has passed, and that you will have great satisfaction in discharging the duties of your office, and testifying your regard for the high distinction accorded to you by the Grand Lodge you represent.

You are correct in your views of the important duties of the Masonic Representative. Your correspondence with your constituents will require careful and thoughtful preparation. As a public minister from a sovereign power which is supported by the most diatinguishod men of Ireland, it will be your province to pay attention to such as may visit our State with letters of intro-