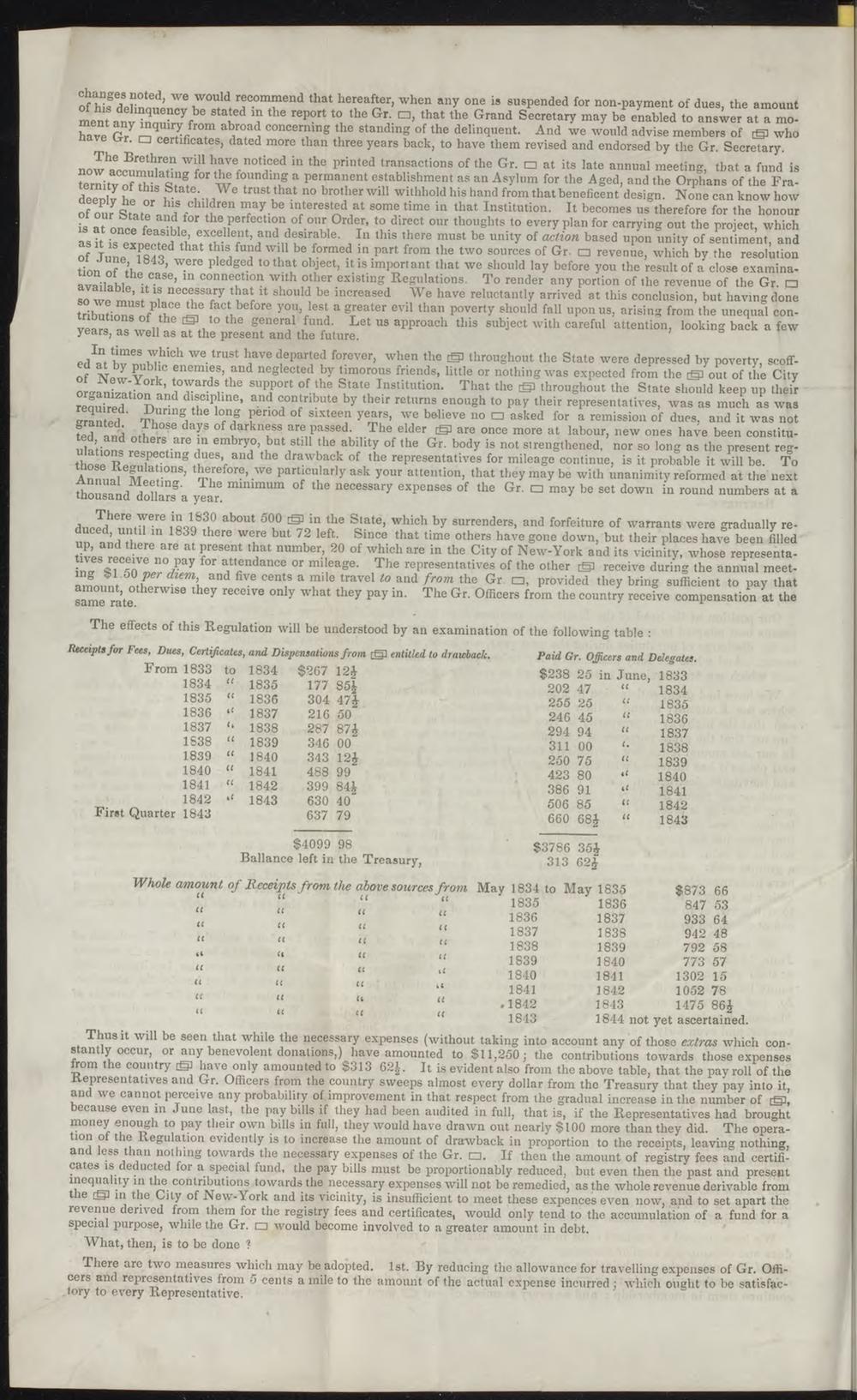 Ir rU dt rr4 Rafter, when any one is suspended for non-payment of dues, the amount

mem anv^Z^f l T the ^ t0, the Gr" D' that the Grand Secretary be enabled to answer at a mof®e p7 ^q" 7/r°m abr0ad concermng the standing of the delinquent. And we would advise members of m who t . □ certificates, dated more than three years back, to have them revised and endorsed by the Gr. Secretary.

nowtc—fJi111;r'e/0t!,Ced in the printed lransaCtions of the Gr- a at its Iate a»™al meeting, tbat a fund is ternitv nfTh £? > w f°undmS a Permallent establishment as an Asylum for the Aged, and the Orphans of the FradeTnlv hP " , trus"hat no brother wil! withhold his hand from that beneficent design. None can lcnow how

of nnr sL f ,chlldren V be mterested at some time in that Institution. It becomes us therefore for the honour is at once Whl thePerfectl°niofo"ri0rdcTr- to direct our thoughts to every plan for carrying out the project, which as it is „„plS ®Xle. ^ ' and desirable. In this there must be umty of action based upon unity of sentiment, and of 1 that Ü,1,S/U'ld w!ü be formed m Part from two sources of Gr. □ revenue, which by the resolütion

tïnn "f V ' W-er® pledged tothat obJect> it is important that we should lay before you the result of a close examinaavailnW -tcase' m conne°tlon with other ex'sting Regulations. To render any portion of the revenue of the Gr. □ so wl rnnC 'f nec®ssary * ^11 sll0,lM be increased We have reluctantly arrived at this conclusion, but having done tributions nf tlC8i^,e , Ct e y°"!r i a g5eater evi1 than Poverty should fall uponus, arising from the unequal conv„1r. f the tg: to the general fund. Let us approach this subject with careful attention, looking back a few years, as well as at the present and the future.

erW hTS whlCh WC trUSt h,aV<3 deParted forever, when the ö throughout the State were depressed by poverty, scoffof K.l v /C fnemif' ,and neSlected by timorous friends, little or nothingwas expected from the ® out of the City oro-antJatinn ,Ta 8sup,p0rt 0 uthe Institution. That the m throughout the State should keep up their

reauired T> d'®CIPlme' and contribute by their returns enough to pay their representatives, was as much as was ^rantfvl ®Uring the lo.ng Penod of Slxteen years, ^ believe no □ asked for a remission of dues, and it was not fed nnH Jf' ^ ° darknf s are Passed- The elder r§] are once more at labour, new ones have been constitunlationJ — ^ f embry°> but,8tl11 the ability of the Gr. body is not s.rengthened, nor so long as the present regtbne t? f g dues' an drawback of the representatives for mileage continue, is it probable it will be. To A , l M a i°nS' therefore, we particularly ask your attention, that theymaybe with unanimity reformed at the uext Süsand dolSa year mmimUm °f the necessaiT expenses of the Gr. □ may be set down in round numbers at a

durll'lminTn i'fiQcffi? ab0Ut 50u° ^o',1 lhe Sl,ate' which by surrendersi and forfeiture of warrants were gradually re' i ,i n 1839 there were but /2 left. Since that time others have gone down, but their places have been filled up, and there are at present that number, 20 of which are in the City of New-York and its vicinity, whose representan° ,?ay for ^ttendance or mileage. The representatives of the other S receive during the annual meetX an Cent,S a m,le travel t0 and fr0m the Gr a' Provided they bring sufficiënt to pay that 't 7 reC61Ve °nly What they pay in' The Gr' 0fficers from the country receive compensation at the

The effects of this Regulation will be understood by an examination of the following table :

Receipts for Fees, Dues, Certificates, and Dispensations from [§] entitled to drawback. Paid Gr. Officers and Delegates.

.inus it win De seen that while the necessary expenses (without taking into account any of those extras which constantly occur, or any benevolent donations,) have amounted to $11,250; the contributions towards those expenses from the country tg] have only amounted to $313 62|. It is evident also from the above table, that the pay roll of the Representatives and Gr. Officers from the country sweeps almost every dollar from the Treasury that they pay into it, and we cannot perceive any probability of improvement in that respect from the gradual increase in the number of [g], because even in June last, the pay bills if they had been audited in full, that is, if the Representatives had brought money enough to pay their own bills in full, they would have drawn out nearly $100 more than they did. The operation of the Regulation evidently is to increase the amount of drawback in proportion to the receipts, leaving nothing, and less than nothing towards the necessary expenses of the Gr. n. If then the amount of registry fees and certificates is deducted for a special fund, the pay bills must be proportionably reduced, but even then the past and present inequaluy in the contributions towards the necessary expenses will not be remedied, as the whole revenue derivable from t ie t§] in the Cily of New-York and its vicinity, is insufficiënt to meet these expences even now, and to set apart the revenue derived from them for the registry fees and certificates, would only tend to the accumulatión of a fund for a special purpose, while the Gr. □ would become involved to a greater amount in debt.

There are two measures which may be adopted. lst. By reducing the allowance for travelling expenses of Gr. Officers and representatives from 5 cents a mile to the amount of the actual expense incurred : which ought to be satisfactory to every Representative.