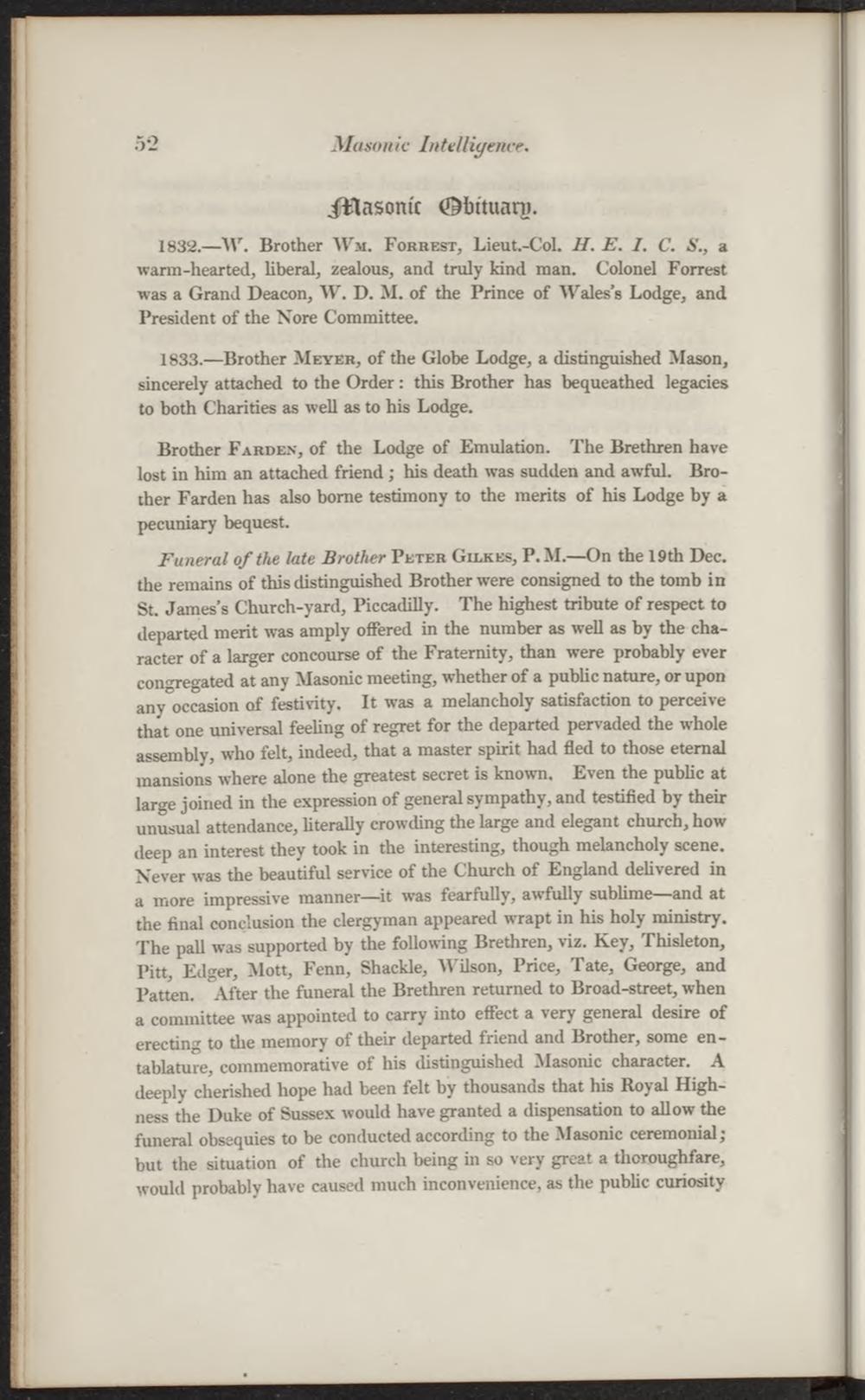 1833.—Brother Meyer, of the Globe Lodge, a distinguished Mason, sincerely attached to the Order : this Brother has bequeathed legacies to both Charities as well as to his Lodge.

Brother Farden, of the Lodge of Emulation. The Brethren have lost in him an attached friend; his death was sudden and awful. Brother Farden has also borne testimony to the merits of his Lodge by a pecuniary bequest.

Funeral of the late Brother Peter Gii.kks, P.M.—On the 19th Dec. the remains of this distinguished Brother were consigned to the tomb in St. James's Church-yard, Piccadilly. The highest tribute of respect to departed merit was amply offered in the number as well as by the character of a larger concourse of the Fraternity, than were probably ever congregated at any Masonic meeting, whetherof a public nature, orupon any occasion of festivity. It was a melancholy satisfaction to perceive that one universal feehng of regret for the departed pervaded the whole assembly, who feit, indeed, that a master spirit had fled to those eternal mansions where alone the greatest secret is known. Even the public at large joined in the expression of general sympathy, and testified by their unusual attendance, üterally crowding the large and elegant church, how deep an interest they took in the interesting, though melancholy scene. Never was the beautiful service of the Church of England delivered in a more impressive manner—it was fearfully, awfully sublime—and at the final concïusion the clergyman appeared wrapt in his holy ministry. The pall was supported by the following Brethren, viz. Key, Thisleton, Pitt, Edger, Mott, Fenn, Shackle, Wilson, Price, Tate, George, and Patten, After the funeral the Brethren returned to Broad-street, when a committee was appointed to carry into effect a very general desire of erecting to the memory of their departed friend and Brother, some entablature, commemorative of his distinguished Masonic character. A deeply cherished hope had been feit by thousands that his Royal Highness the Duke of Sussex would have granted a dispensation to allow the funeral obsequies to be conducted according to the Masonic ceremonial; but the situation of the church being in so very great a theroughfare, would probably have caused much inconvenience, as the public curiosity