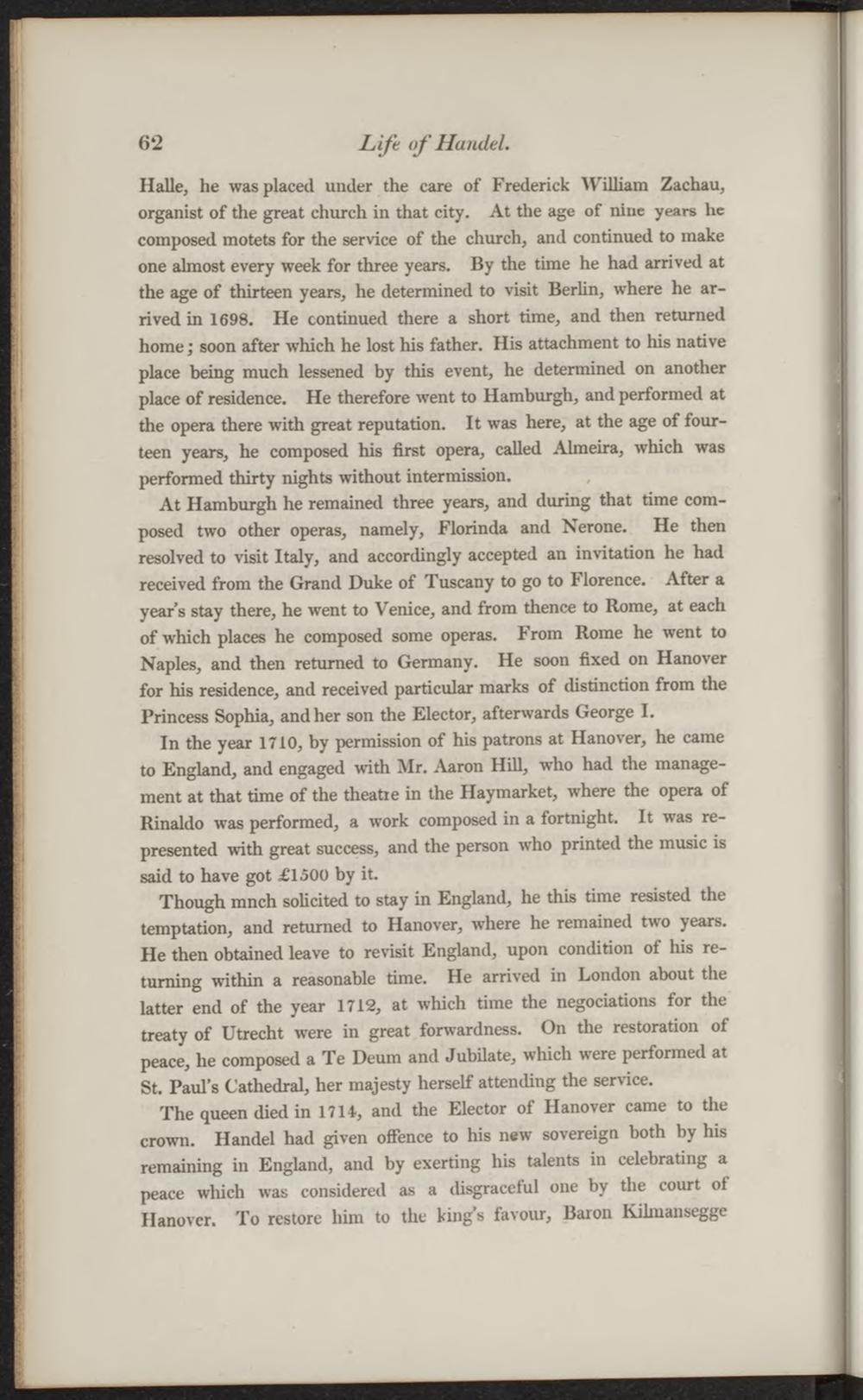 Halle, he wasplaced under the care of Frederick Wiliiam Zachau, organist of the great church in that city. At the age of niue years he composed motets for the service of the church, and continued to make one almost every week for three years. By the time he had arrived at the age of thirteen years, he determined to visit Berlin, where he arrived in 1698. He continued there a short time, and then returned home; soon after which he lost his father. His attachment to his native place being much lessened by this event, he determined on another place of residence. He therefore went to Hamburgh, and performed at the opera there with great reputation. It was here, at the age of fourteen years, he composed his first opera, called Almeira, which was performed thirty nights without intermission.

At Hamburgh he remained three years, and during that time composed two other operas, namely, Florinda and Nerone. He then resolved to visit Italy, and accordingly accepted an invitation he had received from the Grand Duke of Tuscany to go to Florence. After a year's stay there, he went to Venice, and from thence to Rome, at each of which places he composed some operas. From Rome he went to Naples, and then returned to Germany. He soon fixed on Hanover for his residence, and received particular marks of distinction from the Princess Sophia, and her son the Elector, afterwards George I.

In the year 1710, by permission of his patrons at Hanover, he came to England, and engaged with Mr. Aaron Hill, who had the management at that time of the theatie in the Haymarket, where the opera of Rinaldo was performed, a work composed in a fortnight. It was represented with great success, and the person who printed the music is said to have got £1500 by it.

Though mnch solicited to stay in England, he this time resisted the temptation, and returned to Hanover, where he remained two years. He then obtained leave to revisit England, upon condition of his returning within a reasonable time. He arrived in London about the latter end of the year 1712, at which time the negociations for the treaty of Utrecht were in great forwardness. On the restoration of peace, he composed a Te Deum and Jubilate, which were performed at St. Paul's Cathedral, her majesty herself attending the service.

The queen died in 1714, and the Elector of Hanover came to the crown. Handel had given offence to his new sovereign both by his remaining in England, and by exerting his talents in celebrating a peace which was considered as a disgraceful one by the court of Hanover. To restore liim to the king's favour, Baron Kilmansegge