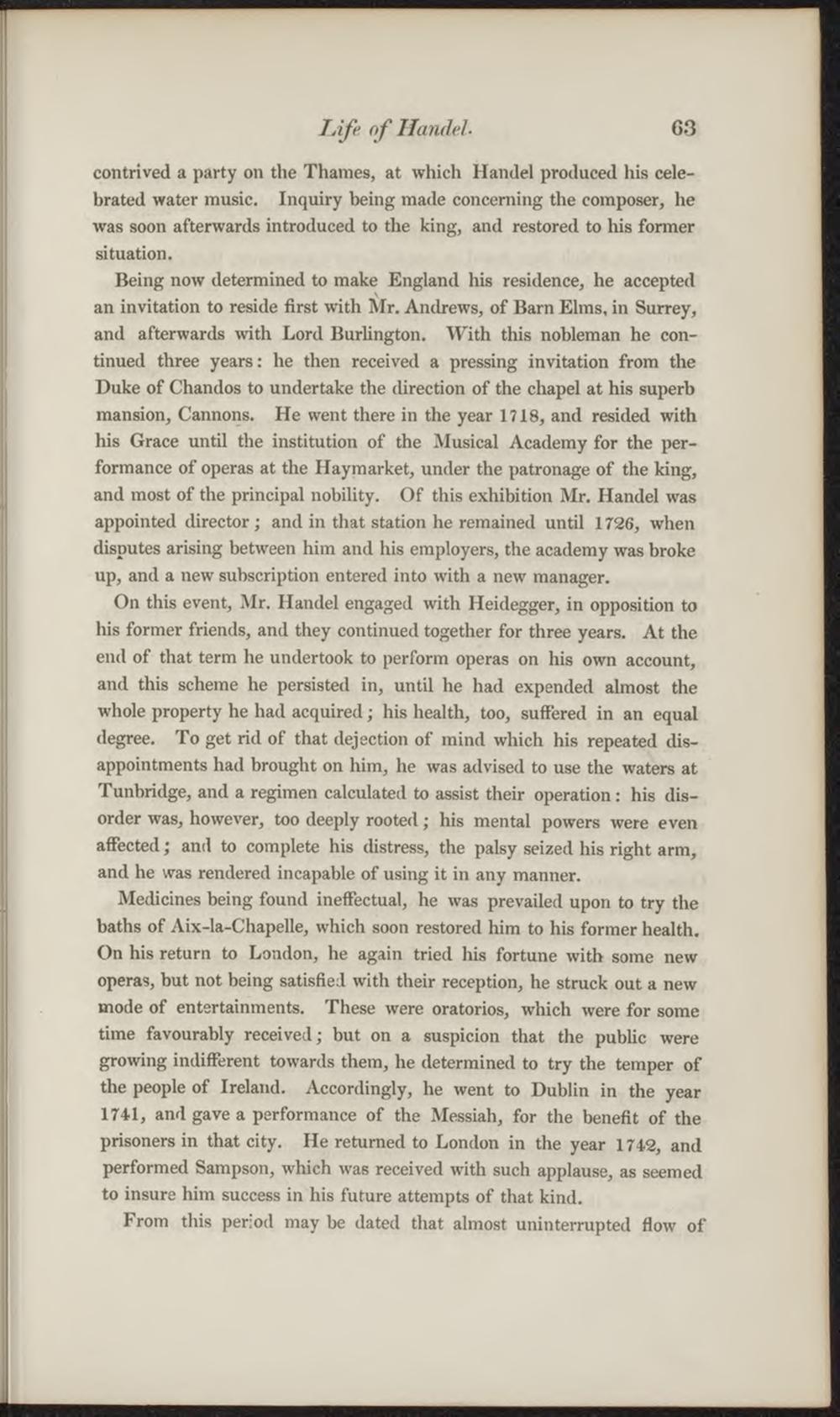 contrived a party on the Thames, at which Handel produced his celebrated water music. Inquiry being made eoncerning the composer, he was soon afterwards introduced to the king, and restored to his former situation.

Being now determined to make England his residence, he accepted an invitation to reside first with Mr. Andrews, of Barn Elms, in Surrey, and afterwards with Lord Burlington. With this nobleman he continued three years: he then received a pressing invitation from the Duke of Chandos to undertake the direction of the chapel at his superb mansion, Cannons. He went there in the year 1718, and resided with his Grace until the institution of the Musical Academy for the performance of operas at the Haymarket, under the patronage of the king, and most of the principal nobility. Of this exhibition Mr. Handel was appointed director ; and in that station he remained until 1726, when disputes arising between him and his employers, the academy was broke up, and a new subscription entered into with a new manager.

On this event, Mr. Handel engaged with Heidegger, in opposition to his former friends, and they continued together for three years. At the end of that term he undertook to perform operas on his own account, and this scheme he persisted in, until he had expended almost the whole property he had acquired; his health, too, suffered in an equal degree. To get rid of that dejection of mind which his repeated disappointments had brought on him, he was advised to use the waters at Tunbridge, and a regimen calculated to assist their operation: his disorder was, however, too deeply rooted; his mental powers were even affected; and to complete his distress, the palsy seized his right arm, and he was rendered incapable of using it in any manner.

Medicines being found ineffectual, he was prevailed upon to try the baths of Aix-la-Chapelle, which soon restored him to his former health. On his return to London, he again tried his fortune with some new operas, but not being satisfied with their reception, he struck out a new mode of entertainments. These were oratorios, which were for some time favourably received; but on a suspicion that the public were growing indifferent towards them, he determined to try the temper of the people of Ireland. Accordingly, he went to Dublin in the year 1741, and gave a performance of the Messiah, for the benefit of the prisoners in that city. He returned to London in the year 1742, and performed Sampson, which was received with such applause, as seemed to insure him success in his future attempts of that kind.

From this period may be dated that almost uninterrupted flow of