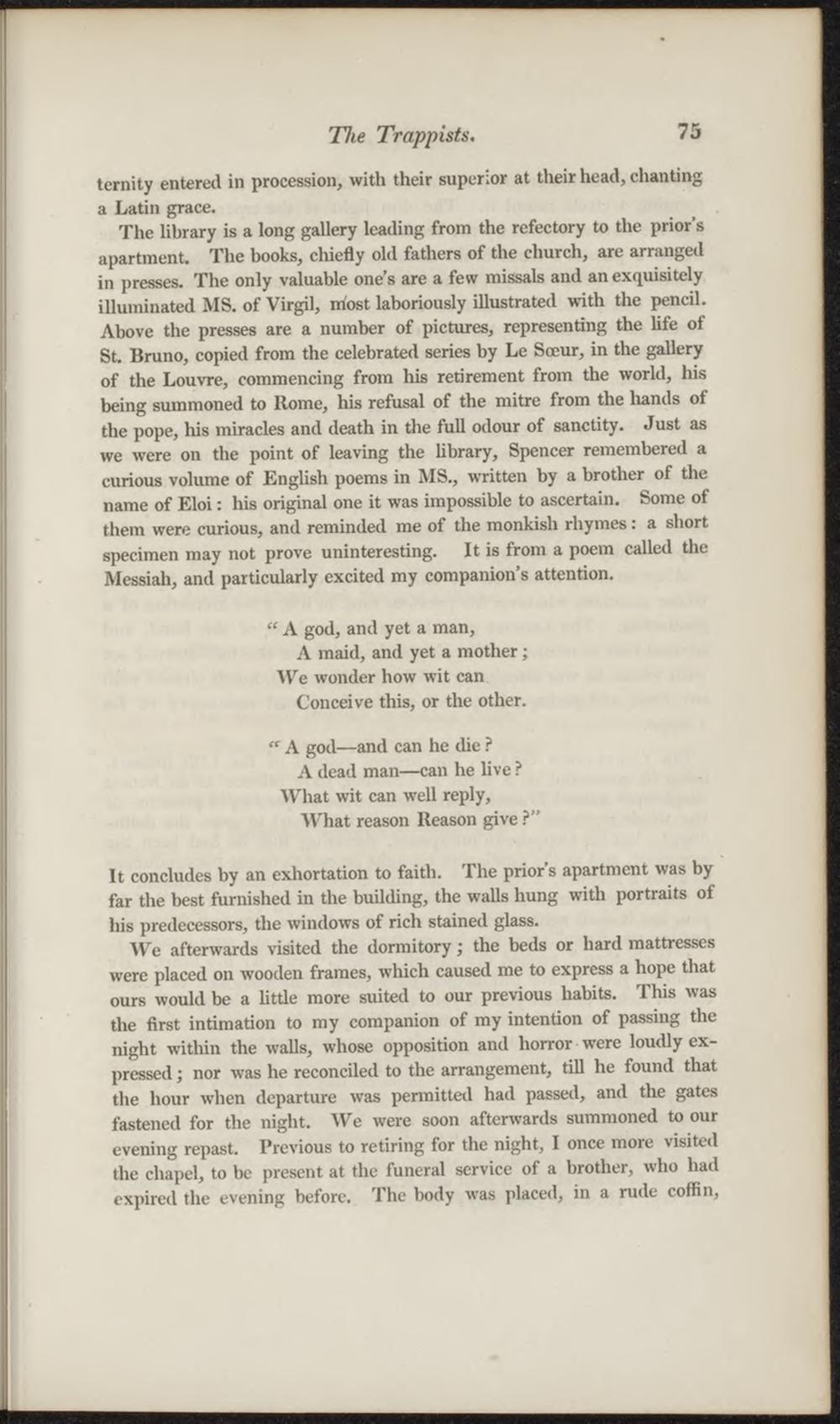 temity entered in procession, with their superior at their head, chanting a Latin grace.

The library is a long gallery leading from the refectory to the prior's apartraent. The books, chiefly old fathers of the church, are arranged in presses. The only valuable one's are a few missals and an exquisitely illuminated MS. of Virgil, most laboriously illustrated with the pencil. Above the presses are a number of pictures, representing the Ufe of St. Bruno, copied from the celebrated series by Le Sceur, in the gallery of the Louvre, commencing from his retirement from the world, his being summoned to Rome, his refusal of the mitre from the hands of the pope, his miracles and death in the full odour of sanctity. Just as we were on the point of leaving the library, Spencer remembered a curious volume of English poems in MS., written by a brother of the name of Eloi: his original one it was impossible to ascertain. Some of them were curious, and reminded me of the monkish rhymes: a short specimen may not prove uninteresting. It is from a poem called the Messiah, and particularly excited my companion's attention.

A maid, and yet a mother;

We wonder how wit can Conceive this, or the other.

A dead man—can he live ?

What wit can well reply,

What reason Reason give ?'

It concludes by an exhortation to faitli. The prior s apartment was by far the best furnished in the building, the walls hung with portraits of his predecessors, the windows of rich stained glass.

We afterwards visited the dormitory; the beds or hard mattresses were placed on wooden frames, which caused me to express a hope that ours would be a little more suited to our previous habits. This was the first intimation to my companion of my intention of passing the night within the walls, whose opposition and horror were loudly expressed; nor was he reconciled to the arrangement, till he found that the hour when departure was permitted had passed, and the gates fastened for the night. We were soon afterwards summoned to our evening repast. Previous to retiring for the night, I once more visited the chapel, to be present at the funeral service of a brother, who had expired the evening before. The body was placed, in a rude coffin,