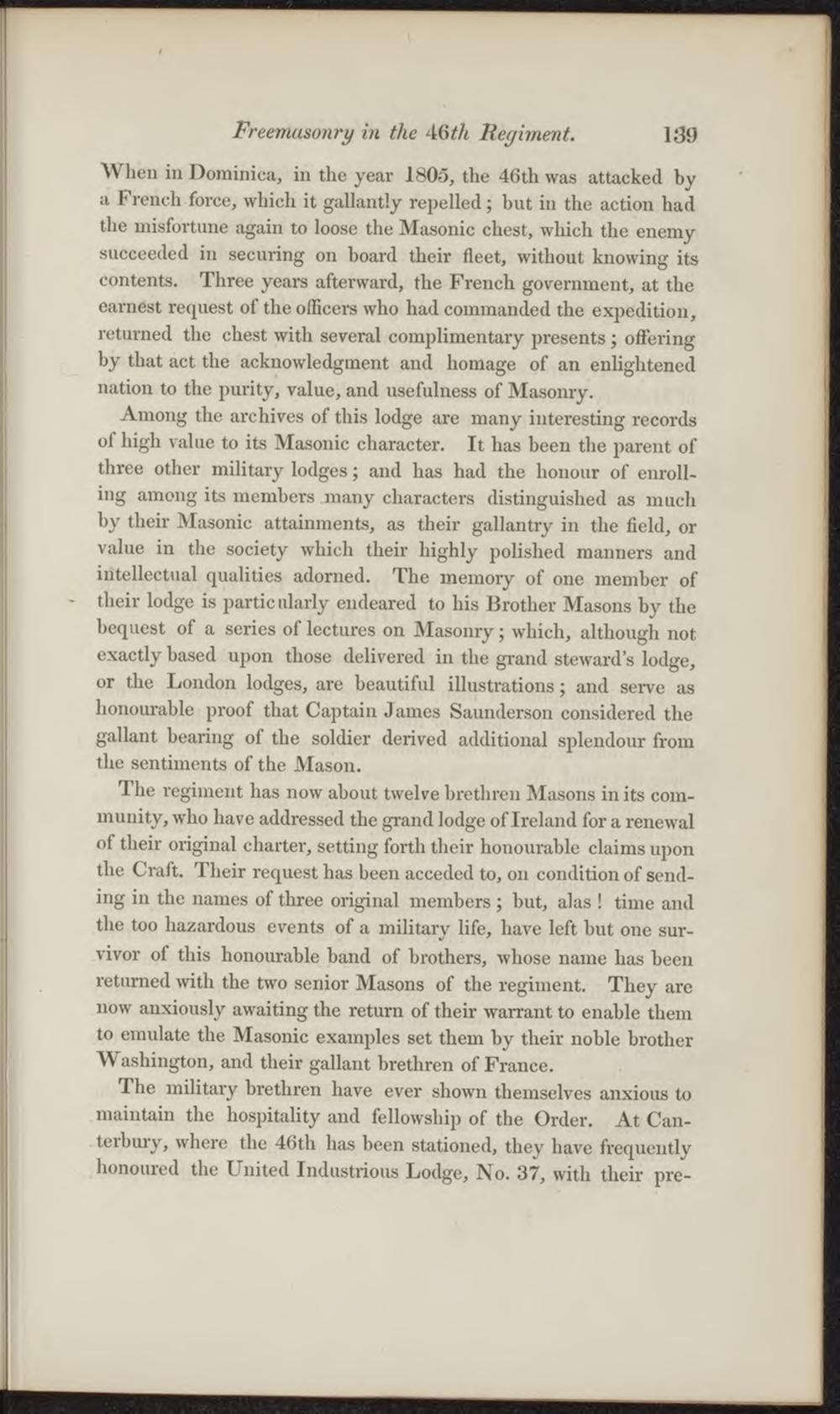 When in Dominica, in the year 1805, the 46th was attacked by a French force, which it gallantly repelled; but in the action had the misfortune again to loose the Masonic chest, which the enemy succeeded in securing on board their fleet, without knowing its contents. Three years afterward, the French government, at the earnest request of theofficers who had cominanded the expedition, returned the chest with several complimentary presents ; offering by that act the acknowledgment and homage of an enlightened nation to the purity, value, and usefulness of Masonry.

Among the archives of this lodge are many interesting records of high value to its Masonic character. It lias been the parent of three other military lodges; and has had the honour of enrolling among its members many characters distinguished as much by their Masonic attainments, as their gallantry in the field, or value in the society which their highly polished manners and intellectual qualities adorned. The memory of one member of their lodge is partic nlarly endeared to his Brother Masons by the bequest of a series of lectures on Masonry; which, although not exactly based upon those delivered in the grand stewards lodge, or the London lodges, are beautiful illustrations; and serve as lionourable proof that Captain James Saunderson considered the gallant hearing of the soldier derived additional splendour from the sentiments of the Mason.

The regiment has now about twelve brethren Masons in its community, who have addressed the grand lodge of Ireland for a renewal of their original charter, setting forth their honourable claims upon the Craft. Their request has been acceded to, on condition of sending in the names of three original members ; but, alas ! time and the too hazardous events of a military life, have left but one survivor of this honourable band of brothers, wliose name has been returned with the two senior Masons of the regiment. They are now anxiously awaiting the return of their warrant to enable them to emulate the Masonic examples set them by their noble brother Washington, and their gallant brethren of France.

The military brethren have ever shown themselves anxious to maintain the hospitality and fellowship of the Order. At Canterbury, where the 46th has been stationed, they have frequently honoured the United Industrious Lodge, No. 37, with their pre-